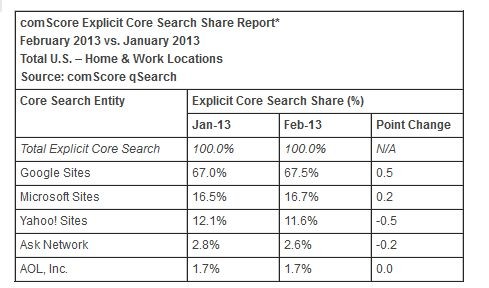 Microsoft has been gaining more and more US users for its Bing search engine and today, ComScore's Internet search results for February 2013 showed that Bing by itself gained some more market share while Yahoo's share continues to decline.

Yahoo came in third with 11.6 percent for February 2013, down 0.5 percent from the month before. Bing is the basis for Yahoo's search engine,  and if you figure in the Yahoo numbers it effectively means that Bing's search engine share lost 0.3 percent of the Internet search market in February.

In a recent interview, Yahoo CEO Marissa Mayer indicated that the company was not yet happy with the Bing search engine deal in terms of Yahoo making money from the partnership with Microsoft. If Yahoo continues to see its market share in search dive as much as it did in February, the company could conceivably make some changes with its Microsoft-Bing deal.

ComScore also said that over 18.3 billion explicit core searches were conducted in February 2013 with Google-based sites generating 12.3 billion., down six percent from January. Microsoft-based sites were second with 3 billion searches, down five percent from the previous month.