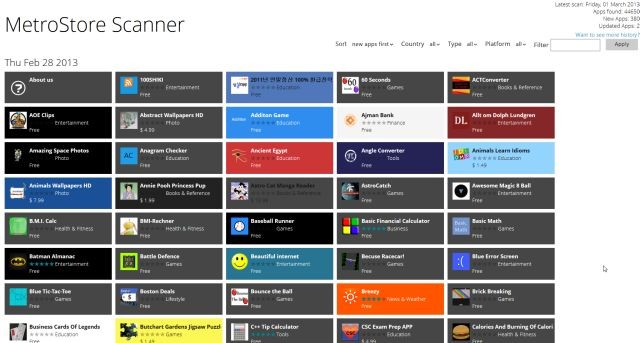 In late January, we noted that the pace of new Windows 8 apps added to the Windows Store had slowed down considerably since the end of 2012. In January, only about 4,000 more apps were added to the store, bringing the total to 39,860.

Those numbers were based on the MetroStore Scanner website, which allows non-Windows 8 PCs to see which apps are in the Store (Microsoft has never offered their own official Windows 8 app numbers). Today, we decided to check the site once again and according to the site's information, the number of new Windows 8 apps went up in the past month or so to 44,680.

That shows that the rate of new apps was about the same in February as it was in January. If it continues at this rate, the overall worldwide app numbers will be over 50,000 by early April. However, the Windows Store might not reach the 100,000 app milestone until sometime in 2014 if the pace continues as this current rate.

The number of Windows 8 apps made specifically for the US market now stands at 30,045, according to MetroStore Scanner. Again, that number is about 4,000 more apps in the store compared to January's stats; China still has the largest number of localized Windows 8 apps with 31,067 apps in the Windows Store.