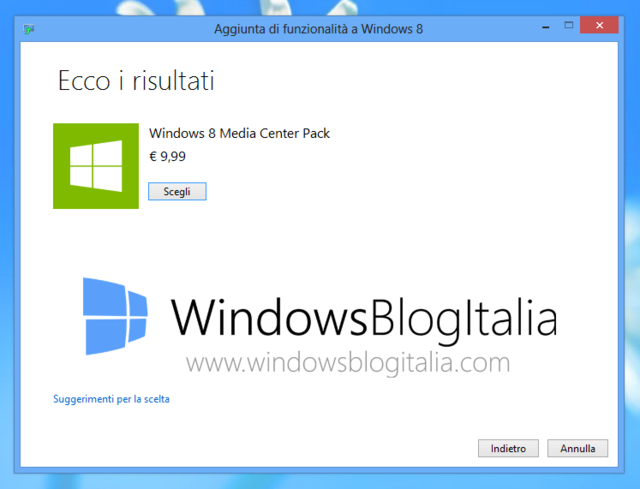 Microsoft has opted not to include Windows Media Center with Windows 8, likely to help keep costs down. The company did announce that the package would be available as an add-on but has yet to announce the price.

Step in WindowsBlogItalia who claims to have a screenshot of the price that Microsoft will charge for the premium product. That price, if the screenshot is to be believed, will be 10 Euros. Microsoft has not confirmed or announced this price as of yet, but the low price point should appease many critics.

Microsoft likely decided to omit Media Center from Windows 8 to keep the cost down for the retail price of the OS. Seeing as the add-on has support for many codecs and formats, Microsoft is required to purchase licenses for the platform. If the price is correct, it would appear that Microsoft was able to shave 10 Euros off the price point by selling Windows Media Center as an extra feature.

After seeing the price, do you agree with Microsoft's decision to omit Media Center or should they have included it with Windows 8 but charged a higher upfront cost?