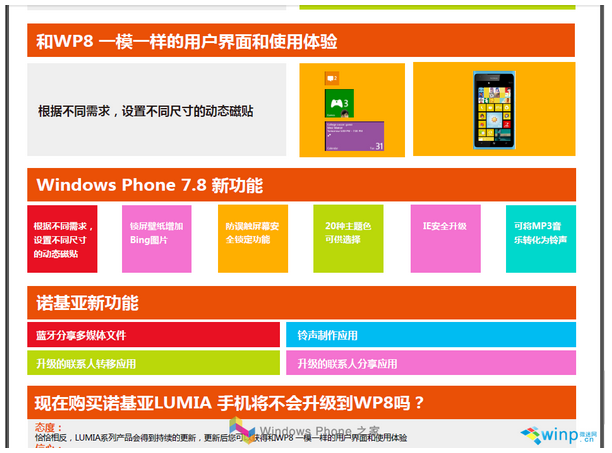 We mentioned Windows Phone 7.8 yesterday, saying that it will most likely launch in Q1 of 2013. Windows Phone 7.8 is and update for older devices that brings a few new features to keep the older hardware still relevant.

However we never knew the exact features coming with the update except the new Start Screen that offers 3 sizes for users to customize their tiles. But now a leaked slide that’s supposedly from Nokia, gives us a bit more info on the update.

Besides the start screen which we mentioned, Windows Phone 7.8 also brings security upgrades for Internet Explorer. Unfortunately it seems the browser itself won’t be upgraded to the new version but rather hold its 9.x denomination.

More color themes will also be included bringing a total of 20 colors from which users can choose. Windows Phone 7.8 also supports editing MP3 files on the phone for users to create new ringtones.

And a new feature that we weren’t expecting the customizable lock screen – where users can pick an app that will change the lock screen periodically such as Bing, ESPN, CNN, etc. This is a very nice addition to the 7.8 upgrade.

Nokia also seems to bring its own improvements to the table with updated apps such as Contacts Transfer as well as the much more interesting feature of sharing files via Bluetooth.

We expect to learn more about the upgrade as we get close to its launch, but as we mentioned before it probably won’t be coming this year.