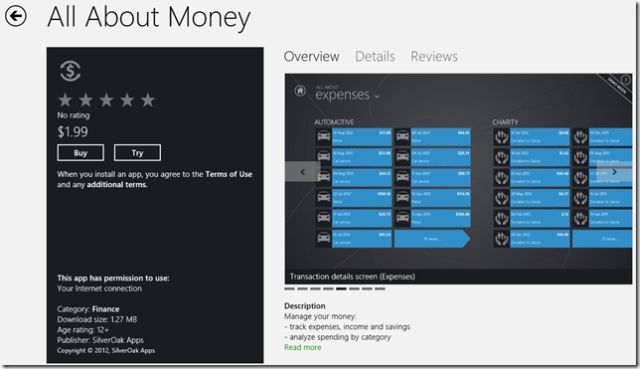 The RTM version of Windows 8 has been in some people's (legal) possession for a few weeks now, and since the completion of the RTM build there has also been a strong rise in the number of Windows 8 "Modern" apps. Last week, it was estimated that there were 660 apps available for download from the Windows Store, an increase of 195 apps from the previous week.

This week, McAkins Online, which has been monitoring the amount of new Windows 8 apps put into the store since the RTM build was released, posted up yet another app number update, claiming that the number had gone up to 777 apps in the store. Just a few hours later, the site posted an update to that same post saying the number went up to 820 and may be high at 839.

Some of the new "Modern" apps that have been added to the store in the past week include All About the Money, a personal finance app (shown above). There's also a Windows 8 app for the coupon online service Groupon but it doesn't appear to be an official app authorized by Groupon.