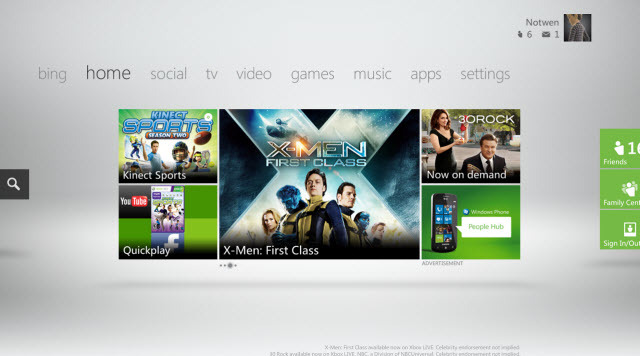 Microsoft is prepping to launch another major update to the Xbox 360 user interface, otherwise known as the dashboard, later this year. Today new previews of the dashboard update were posted on several web sites, including word that a beta test for the update will launch in October before the final version will be distributed free to all Xbox 360 owners. When the Xbox 360 launched back in 2005, it had a "blade" design that was dumped in 2008 with the New Xbox Experience update.

Venture Beat reports that the design of the new dashboard update resembles the tile-themed UI created for Microsoft's Windows Phone 7 and the upcoming Windows 8 operating system. It also allows Xbox 360 users to go through content much faster which is needed since the amount of content available to Xbox 360 owners has increased dramatically over the years.

The new update will also take advantage of the Kinect motion controller camera add-on that launched in November 2010. Players will be able to use the Kinect's voice recognition feature to navigate though the new user interface or you can simply move and wave your hand to interact with the new dashboard. Joystiq reports on the new Bing-based search features that will enable users to look up anything available for the Xbox 360 via the controller or with Kinect via the voice feature.

Other new features include players highlighting Xbox 360 game achievements and then sharing them via your Facebook or Twitter account, and "beacons" that let players send an open and invite for friends to play games. Unfortunately, Microsoft is not yet talking about its plans to offer live television via Xbox 360, first revealed at E3 2011 in June, although that should also be a part of the next dashboard update.