Xiaomi launched the Redmi 3S and 3S Prime in India in August, following up the original Redmi 3, which was launched in January alongside the Redmi Note 3. The smartphone features some really good specifications and premium looks at a very affordable price.

Xiaomi regularly holds flash sales for these smartphones on its website and through online retailer, Flipkart, in India. I was able to purchase the 3S Prime in the first ever sale from the company's site, but purchase isn't guaranteed for all, since the devices sell out within seconds each time. Speaking in terms of specs alone, there is barely any competition for the Redmi 3S, but does that alone make the device a worthy buy? Let us find out.

Much like the Xiaomi Mi Max, that we recently reviewed, there isn't a lot inside the Redmi 3S Prime's box as well. 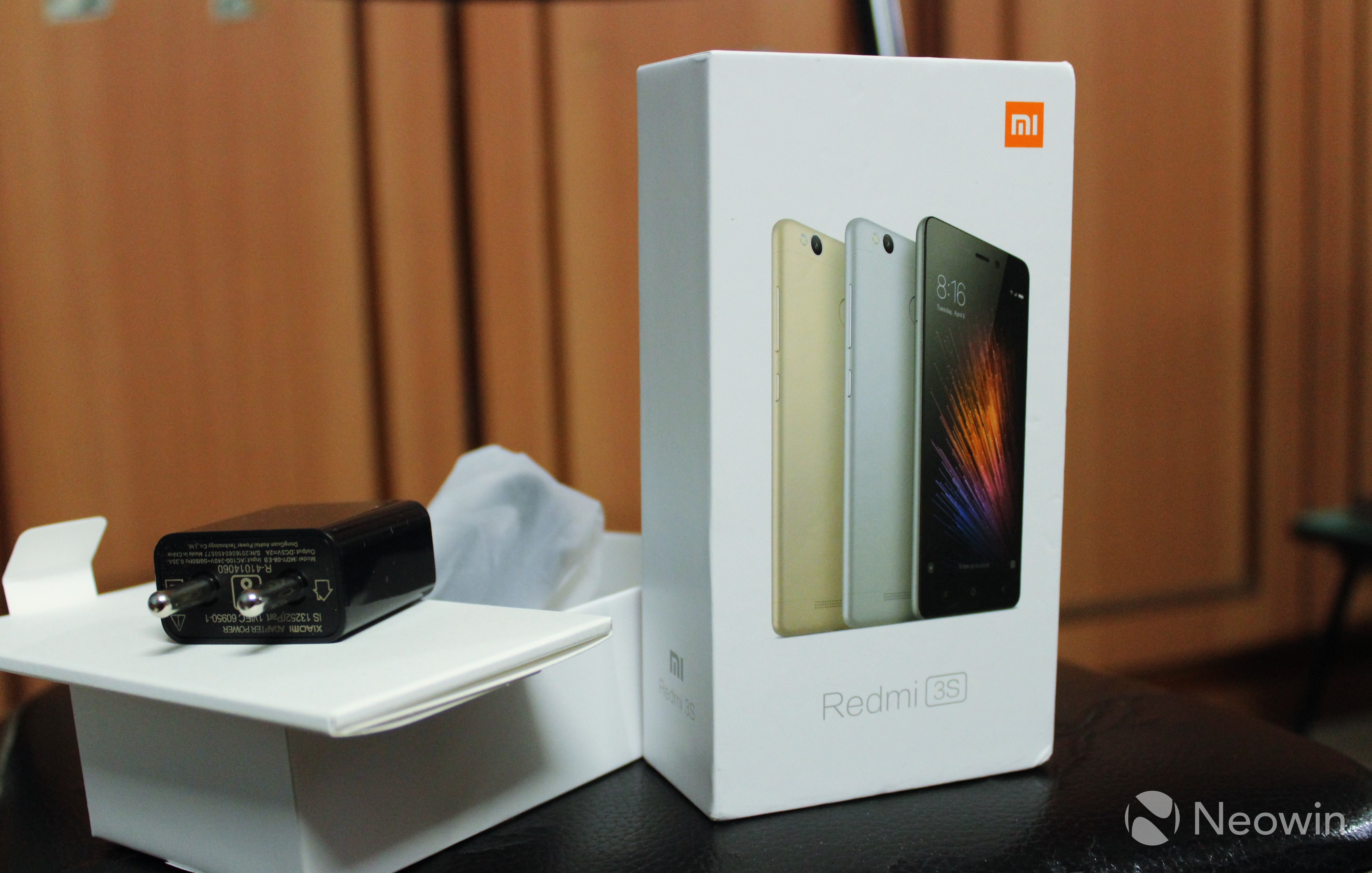 The iPhone-inspired box, packs just a travel charger, a USB cable, a small booklet and the smartphone itself. It seems to have become a standard practice among manufacturers to keep the accessories to a minimum for low priced devices.

There is no protective cover or screen protector bundled along with the device, but the company has been selling such accessories from the first sale itself for prices starting at Rs. 349 ($6).

The Redmi 3S Prime looks a lot like the Mi Max, but in a smaller size. Xiaomi has stuck to this design language in nearly all of its smartphones that were released this year, including the newly launched Redmi Note 4, and it's a good thing that the company is working on creating identifiable products. 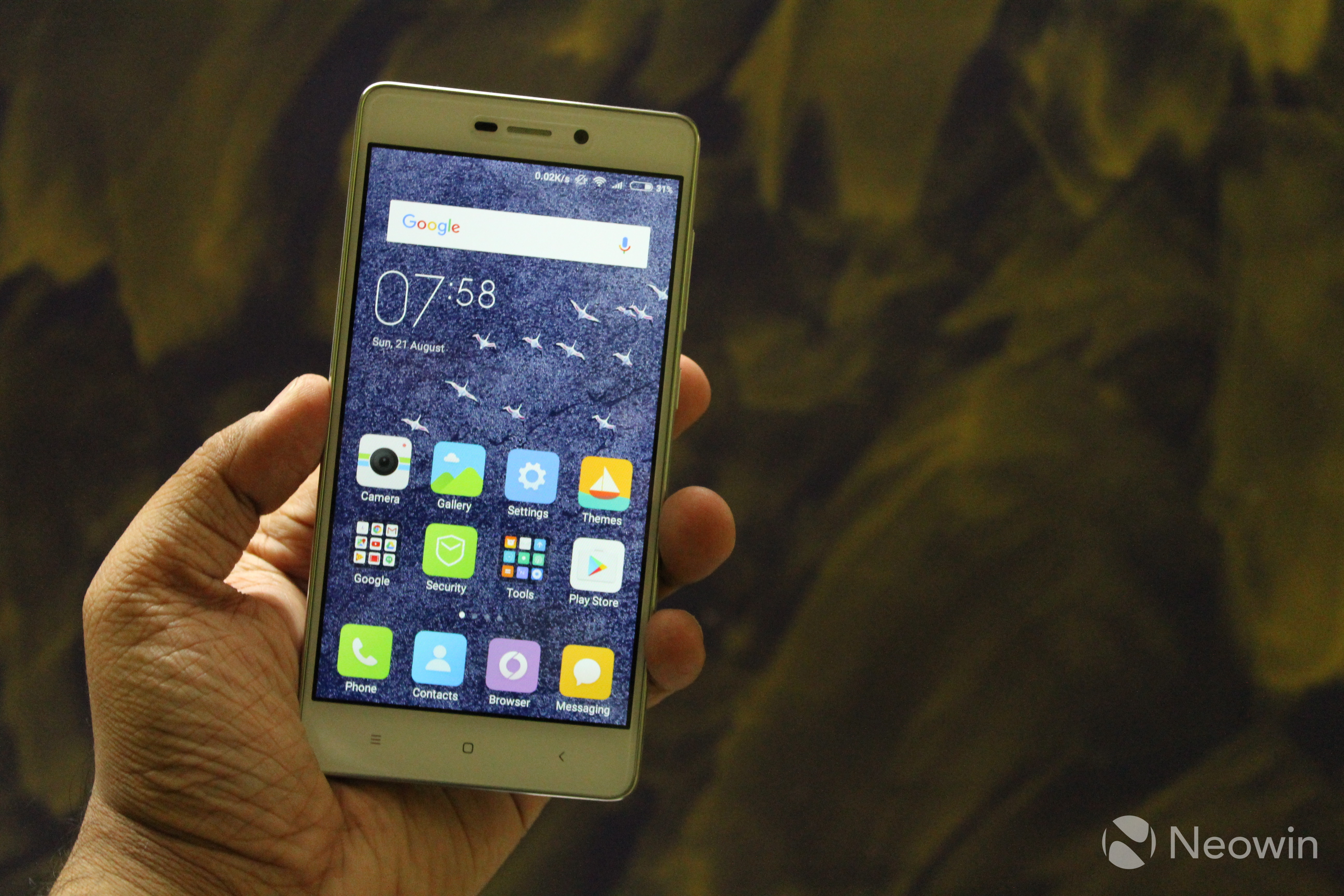 Having said that, the device is good looking and has a premium feel to it, owing to the metal back and the glass front. The smartphone doesn't feature a unibody construction, but the rear casing is sealed up for good measure. A chrome lining borders the screen on the silver variant, and is prone to scratches, a problem that doesn't exist on other parts of the device.

The metal finish on the back side is extremely slippery and I managed to drop the phone twice, leading to a minor dent. Unlike the Mi Max, there are no chamfered edges on the back side of the 3S, but only curves. The power button and volume rocker are on the right side of the device, while the hybrid dual-sim tray is on the left side.

On the front of the device, there are the capacitive keys at the bottom, ambient light and proximity sensors at the top along with the speaker and a front facing camera. The capacitive keys do not light up, however, the home key houses the notification light which makes it a little easier to recognize which way to hold the device in the dark.

The back side of the 3S Prime features the camera, a fingerprint sensor and the loudspeaker. On the bottom edge, there is a microphone and the micro USB slot, while the top edge houses a 3.5 mm headphone jack, an IR blaster and a secondary microphone. Even with all the sides occupied, the design still feels minimalist and simple.

The Redmi 3S / Prime's 5-inch HD (720p) display is adequate, and for its price one cannot complain much about it. I would have preferred a 2.5D curved glass and Gorilla Glass protection, but those were the corners that Xiaomi chose to cut in keeping the device's price low. I wasn't too confident about the scratch resistant coating on the screen and decided to apply a tempered glass protector on it. 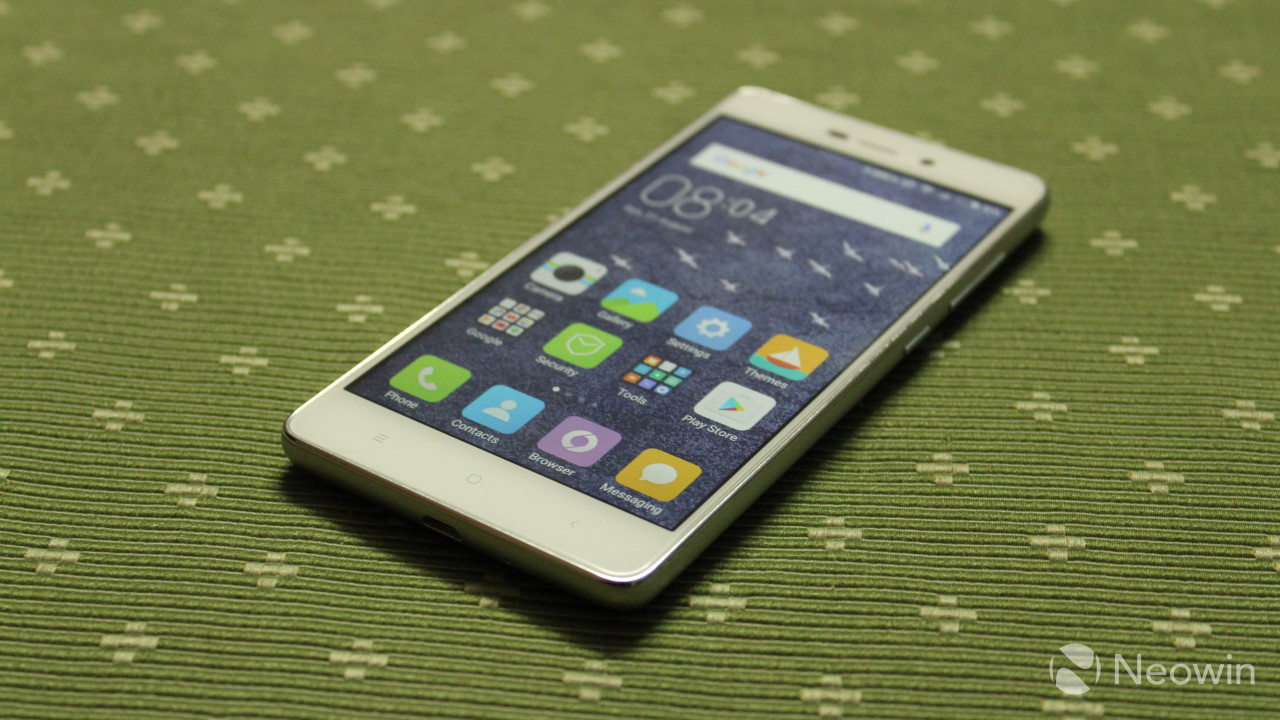 The display's colour reproduction, viewing angles and sunlight legibility are perfectly fine and only those who have used smartphones with better displays might find it lacking. For someone who is upgrading from an older entry-level device, this one should look great. Xiaomi provides a color calibration setting to adjust the saturation and color temperature, but the standard configuration was good enough for me.

Unlike some Chinese smartphones that I have used in this price range, the Redmi 3S' brightness range was quite good. As a result of this, the adaptive brightness also worked well in a variety of lighting situations.

Xiaomi has only launched the device in India so far, and has only included 2G, 3G and 4G LTE bands that are currently in use in the country. The network reception wasn't an issue on the device both outdoors and inside buildings.

On the audio front, the Redmi 3S Prime's loudspeaker is a major let down. The sound lacks any sort of bass and loudness. From the 3.5 mm headphone jack, the output was good enough but nothing special once again.

MIUI's audio customizations are built into the Redmi 3S Prime just like other Xiaomi devices. The device offers plenty of controls to enhance the output, but it can only help a little, owing to the limitations of the hardware itself.

The Redmi 3S Prime is a good daylight shooter is what I've gathered from my time with the device. I used it in different locations and lighting conditions, but low light got the worst out of the smartphone's 13-megapixel snapper.

It is a fast module, it supports phase-detect autofocus and has decent HDR capabilities. The images have good amount of saturation and don't look washed out. In low light the image quality takes a major hit and there is significant amount of softness and distortion seen in every bit of detail.

Video quality in daylight is also quite good, but the accompanying audio is on the lower side. Under lights, there is a lot of noise and a lack of detail.

If you like taking food pics in dimly lit restaurants or record videos at concerts, you'd be better off with a device in a higher price range like the Redmi Note 3, the Mi Max or the Moto G4.

The 5-megapixel front camera of the Redmi 3S Prime is significantly better in most lighting conditions. Even in the dark it manages to capture decent selfies. There is a bit of softness in the images, but they are clear enough to be shared on social media with filters and such.

Xiaomi's camera software has many features, including a manual mode, panorama mode, beautify, and time lapse. Having them natively is a good addition, but I didn't find much use for them. The manual mode on the Redmi 3S Prime doesn't offer the same level of control as the Note 3 or Max. Users can only change the white balance or ISO using this mode.

The Redmi 3S Prime is powered by Android Marshmallow 6.0-based MIUI 7.5.3, though MIUI 8 has already begun rolling out for older devices. It is a bit peculiar that Xiaomi didn't ship it with the latest version of its OS. 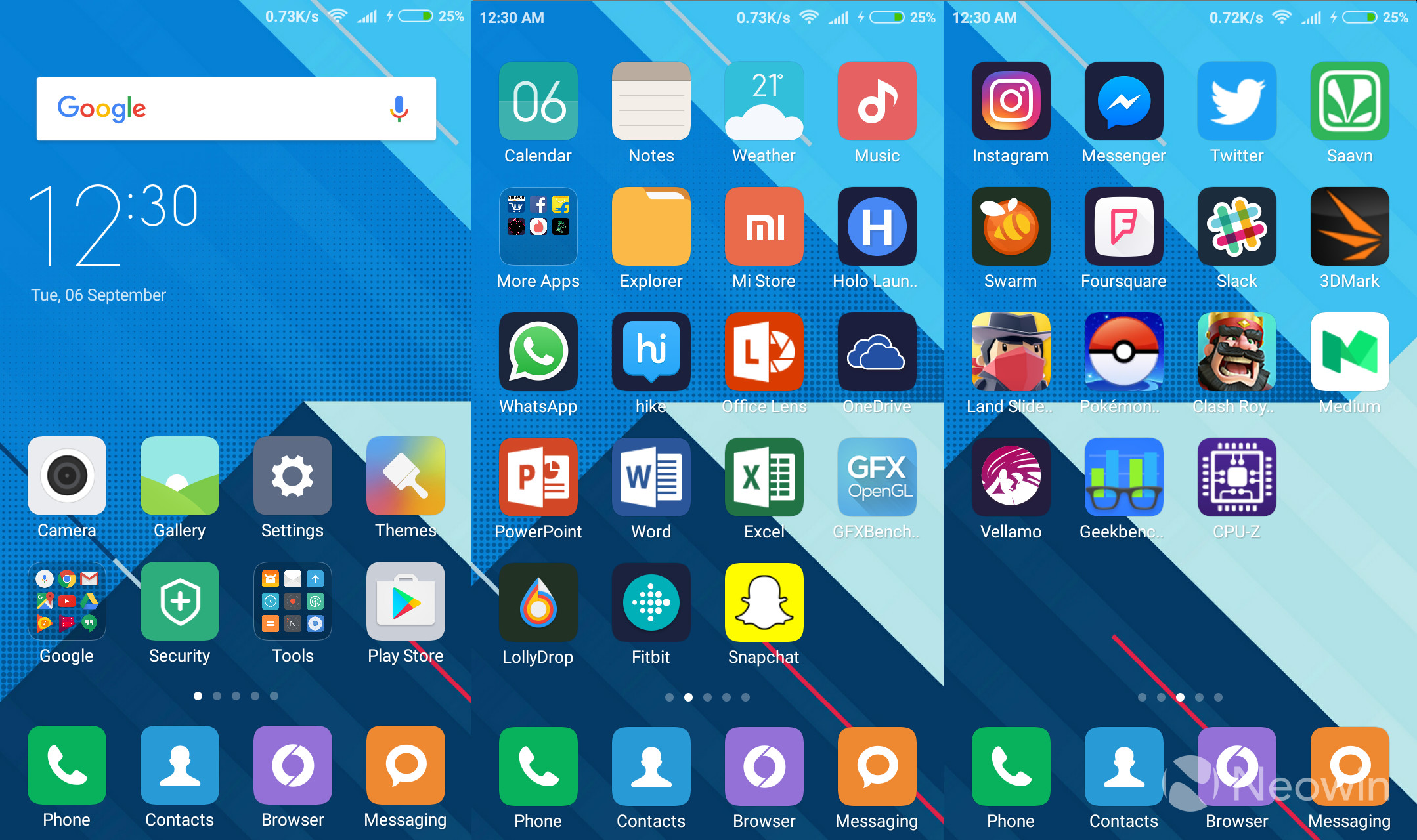 MIUI's Indian ROM has plenty of bloat compared to that on the Mi Max, that was shipped to me from China. These apps can be uninstalled from the application settings menu, but they do not free up the ROM and will be restored after a factory reset.

The UI itself is quite good and my experience with MIUI has always been positive, since I am not much of a stock Android fan. I prefer the software customizations that manufacturers do to enhance the core Android experience, and MIUI is no different. There were no UI inconsistencies while using any of the MIUI apps, and the experience was certainly an unmatched one for a device worth less than $130.

Having said that, it isn't a flawless piece of software as it has stability issues when using the GPS in high accuracy mode. The applications accessing the device's location in this mode often get stuck in memory and end up consuming a lot of RAM, effectively slowing down the device to a point where a reboot is required.

I am hoping that a software update can fix this issue, or it would definitely not be worth buying the Redmi 3S Prime for someone who needs GPS navigation often, or relies on apps that require accurate location.

Xiaomi has opted for the inexpensive Snapdragon 430 chipset for the Redmi 3S / 3S Prime, which features an octa-core CPU clocked at a maximum speed of 1.4 GHz and the Adreno 505 GPU. The original Redmi 3 on the other hand features a Snapdragon 616 chipset, but there isn't a ton of difference between the two chips. 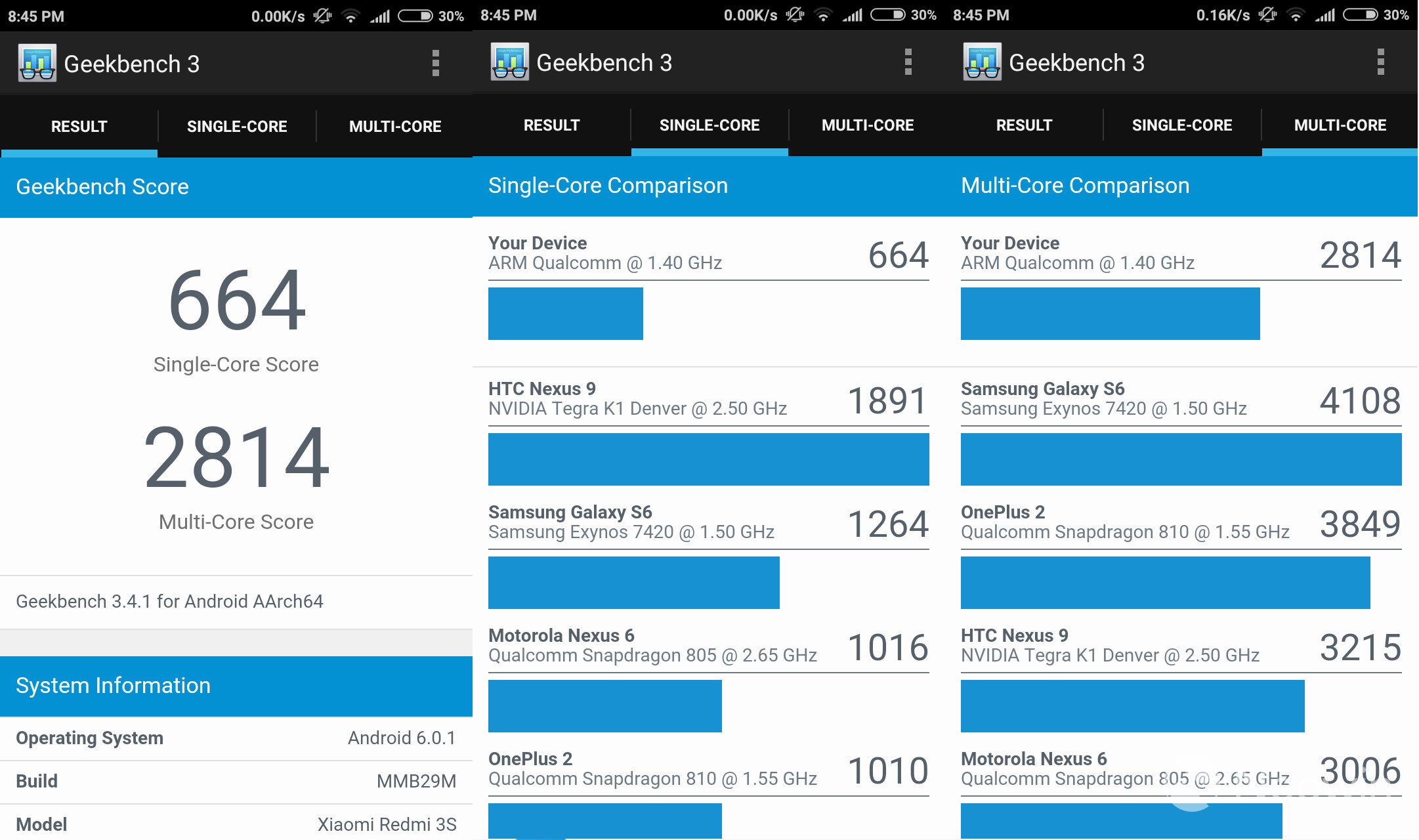 The 3S Prime features 3 GB of RAM and 32 GB of onboard storage, which is a really good combination for a device in this price range. There is no noticeable sluggishness in day-to-day usage due to the ample amount of RAM, but app loading times are certainly on the slower side compared to the device's larger siblings such as the Redmi Note 3 or the Mi Max. 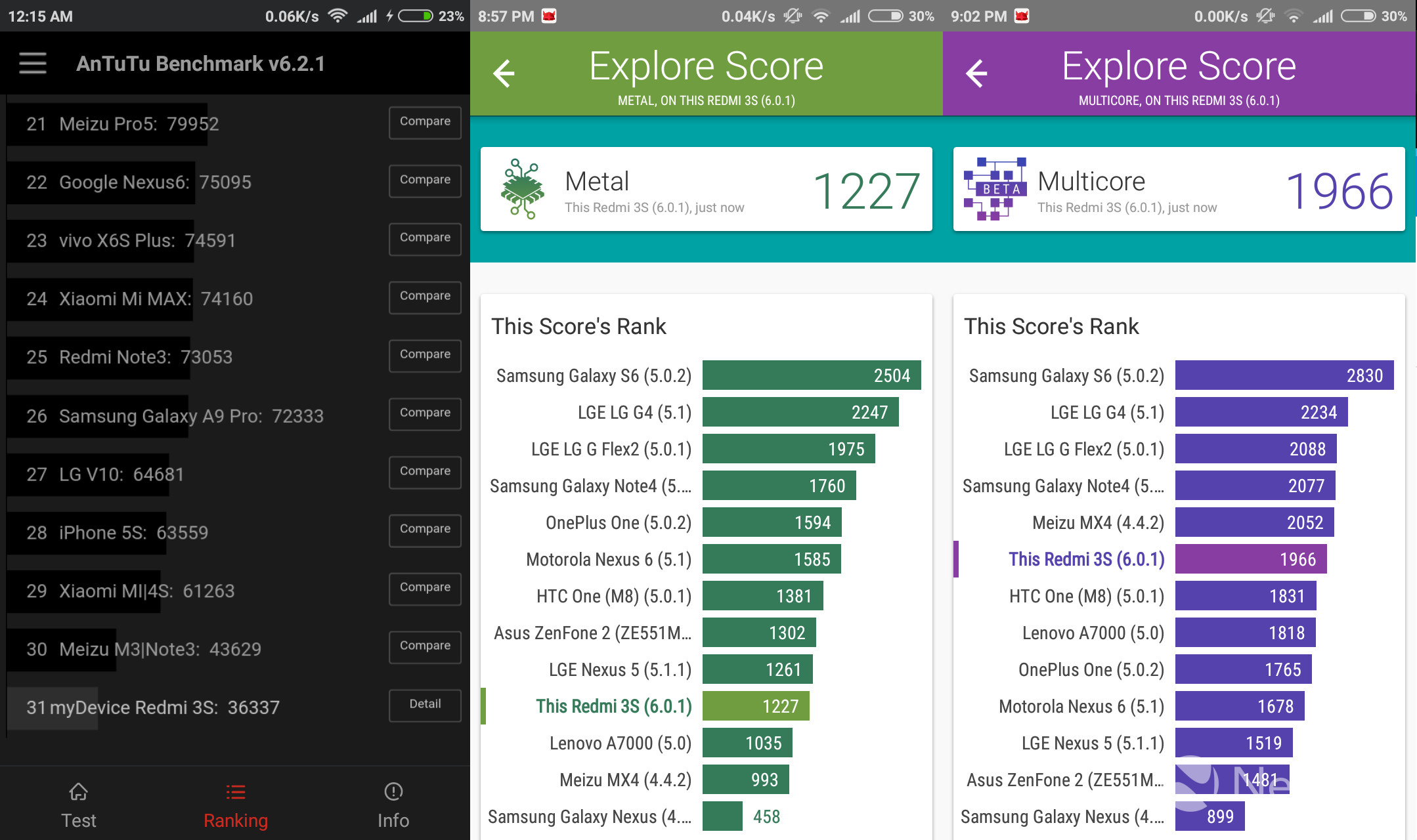 Pushing a 1280x720 resolution to a 5-inch screen also helps the Redmi 3S Prime deliver better performance, as the lowly resolution means less number of pixels need to be powered by the chip. Gaming is generally a smooth affair with the occasional hiccup in heavier games such as Dead Trigger 2 or Asphalt: Airborne. Simpler games such as Pokemon GO, Clash of Clans have no issues whatsoever.

Over a period of three weeks, I only had to clear up background tasks a couple of times and it was due to the GPS issue mentioned earlier. For an entry-level device, the performance of the Redmi 3S Prime is vastly superior, but it is certainly not level jumping and isn't comparable to any mid-range device out there with respect to performance.

One of the key positives in the Redmi 3S / 3S Prime is the 4100 mAh battery, which lasts two days with average use. The larger battery keeps the phone ticking for a really long time and that is something most entry-level devices fail at. 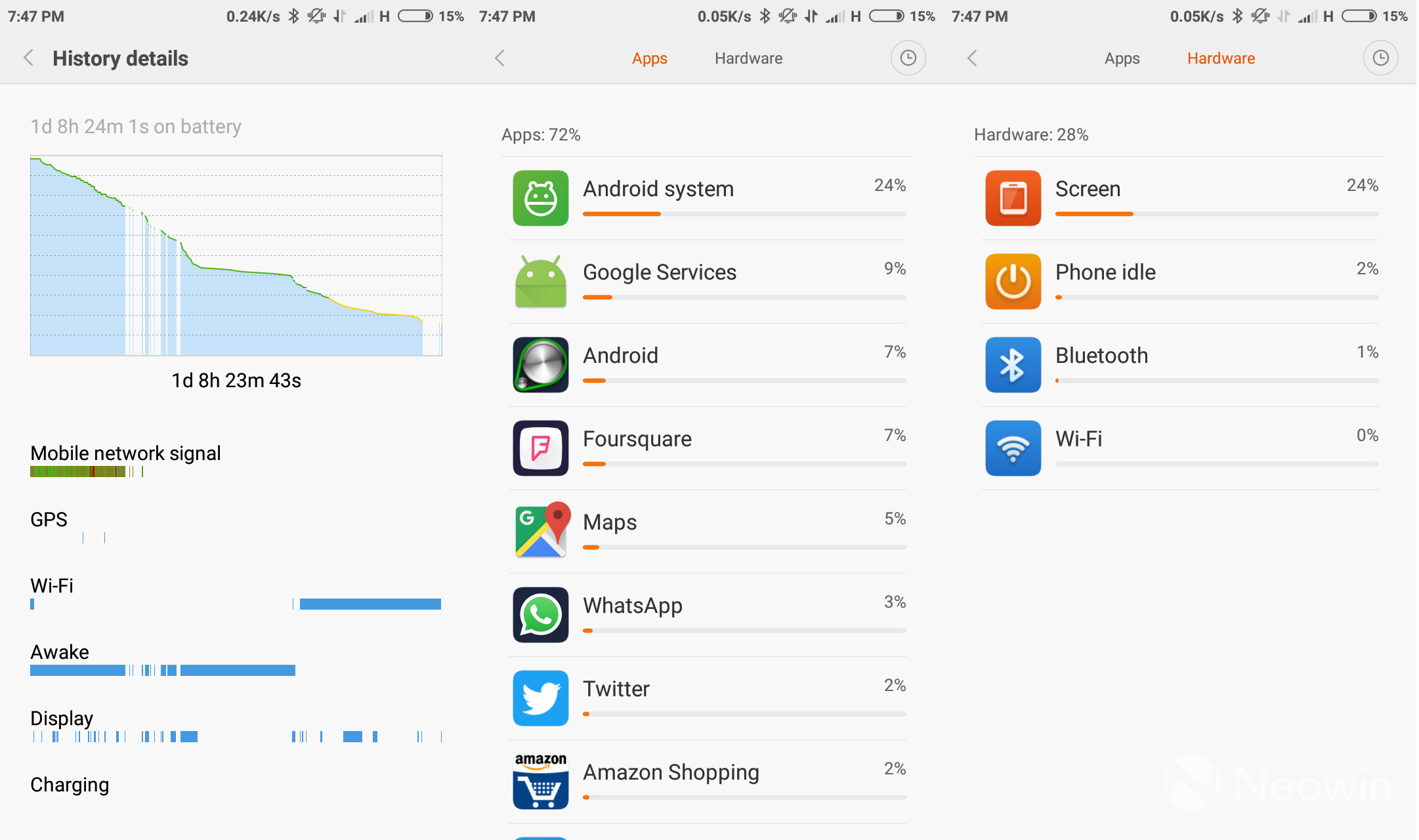 With moderate usage of WhatsApp, Snapchat, Instagram, 5-10 phone calls and a lot of Twitter, I could make the phone last two full days, while heavy usage including gaming and a bit of photography the phone could last 1.5 days. Even on busiest of work days, I assume the device should see you through the night.

Due to the large battery, charging the device takes up to 2.5 hours and that is a bit of a bummer. Additionally, the smartphone doesn't support fast charging so those charging times can't be improved much.

As an entry-level device, the Redmi 3S Prime has nearly no competition except for a few devices from the Lenovo K5 series or the Honor 5C. However, for just another $15, Xiaomi's very own Redmi Note 3 is a much better deal due to a higher resolution screen, a more capable chipset and a better camera.

For those looking for a cheap smartphone that does everything and cannot stretch their budget any further than this, the Redmi 3S Prime is the way to go. If the fingerprint sensor isn't a requirement and the lesser RAM and storage works for you, then the standard Redmi 3S is also a good deal provided that you can click the buy button fast enough on the day of the sale.

It isn't clear whether Xiaomi will be launching the Redmi 3S / 3S Prime outside of India anytime soon but the company's Redmi 3 Pro and Redmi 3X variants, which are similar to these devices can be bought from Chinese retailers such as Gearbest for around $150.

Xiaomi's latest attempt has improved upon what Motorola started with the Moto G and now has a more value for money offering. However, with more Chinese manufacturers aiming for this price segment we might see an intense competition in this range very soon.