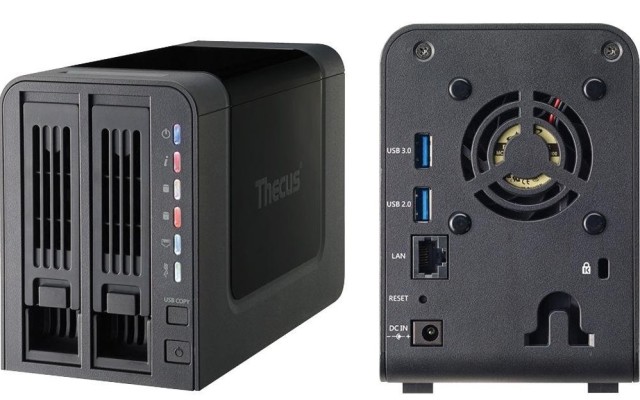 Although more and more data is being housed in the cloud for easy access, there's many good reasons why users should keep a copy of their data on-site. Luckily, there are many different local solutions to choose from: USB thumb drives, standalone hard drives, and network attached storage (NAS) devices are some of the most common. It's this last category that I'm going to explore today: The Thecus N2310 NAS device.

The Thecus N2310 is definitely an entry-level, budget-minded NAS device for the home user. Sporting an AMCC APM 86491 800Mhz CPU and 512MB of DDR3 RAM, the box has room for up to two, four terabyte hard drives. It has a single gigabit Ethernet port, one USB 3 port, and one USB 2 port on the back. It's smaller than the Synology DS212, measuring in at 5.3 inches high, 3.8 inches wide, and 8 inches deep. The device is kept cool by a single 60mm fan. At less than $200 (excluding disks), the device is one of the cheapest on the market. 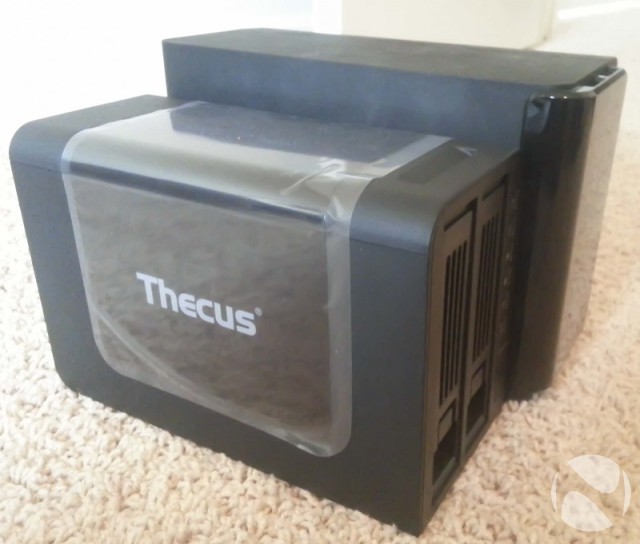 The N2310 is a small, two bay device, made entirely out of plastic; the drive bays are uncovered and the drives slide out easily. The small size means you can hide it out of sight and the construction material helps keep the price low. Unfortunately, it also makes the device feel cheap, and while most people won't be touching the N2310 after installation, it would've been nice to have a slightly better looking design.

The front of the device has a power button and a quick "USB Copy" button. The back of the device is sparse, with an Ethernet port, two USB ports, a reset button, the power connector, and a Kensington lock.

Connecting your drives to the N2310 is as easy as placing it into one of the drive sleds, screwing in four (included) screws, and sliding the bay into the device. From there, plug in an Ethernet cable, connect the power, and you're done.

With only a single fan and two drives, the N2310 is a relatively quiet device. Using the sound meter from the SmartTools app, and placing the phone an inch away from the back of the NAS device, I recorded an average volume of 65 dB. For point of reference, the room itself is roughly 40 dB. The Synology DS212 was slightly quieter, measuring at roughly 55 dB, but that's to be expected with the larger fan.

In order to connect to the N2310, you have to first install the Thecus Intelligent NAS (TIN) software on your desktop. Installation of the tool is simple, as long as you keep in mind that it must be on the same subnet as the NAS itself. For most people this won't be an issue, but as someone who uses virtualization on a separate subnet when installing new software, it caused a few minutes of confusion when TIN couldn't find the N2310. 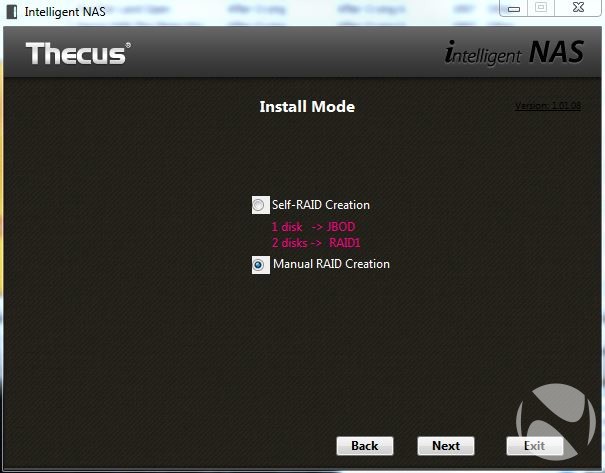 Unfortunately, software is where this device starts to have issues. After getting TIN installed, I went to begin configuration of the device. In theory, the software steps you through the process of getting everything up and running, but you can immediately see that the tool is a little rough around the edges. I first noticed it when I saw the radio buttons that didn't have a matching background to the screen. 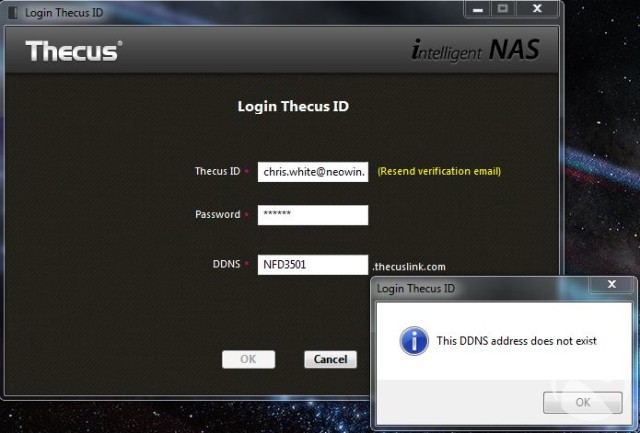 During the setup process, you're also required to create a Thecus ID, although there's no explanation of what it's for. The signup process doesn't follow password best practices of requiring it be entered twice, and the page also prompts for a DDNS name, although it's not clear what the parameters for this are. When picking the default, we received another ambiguous error message, but were able to get past it by entering a different DDNS name. Once this step is complete, you can simply point your browser to the N2310 to login.

When you connect to the device, you're greeted with an ominous disclaimer:

While I'm sure the lawyers required this due to our litigious society, it does make you stop and wonder about the longevity of the product.

After getting past the disclaimer, I was prompted to upgrade the OS and various components of the product; the process was straight-forward and took less than ten minutes.

At this point, it was time to build the array. The N2310 supports both RAID-1 (mirroring) and JBOD. The former gives you protection if one of your disks fails, but cuts your storage capacity in half, while the latter gives you more storage but if one of the two drives fails, you lose all of your data. I personally recommend always using RAID-1 for a two-drive NAS device.

The entire volume can be encrypted if you choose, which would prevent someone from simply pulling the drives from the device and mounting them elsewhere. This is a good feature to have, although it also means you have to enter the password whenever you reboot the device. Building the array, using two 1TB drives, took roughly four hours although a "quick format" option is available which speeds that process up if you want.

From a pure filestore perspective, the performance of the N2310 is good. Using Intel's NAS Performance Toolkit, we saw average speeds of 74MB/s when copying from the NAS and 71MB/s when copying to the device. This performance is very good, and is actually better than what we saw on the Synology DS212. 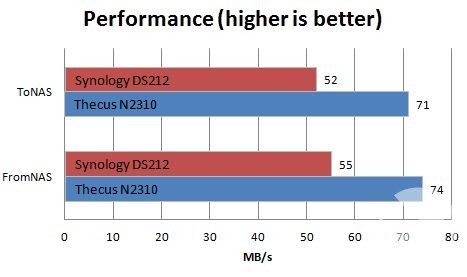 That said, performance starts taking a dip when the N2310 is doing more than one thing, and there were several times when the volumes became unresponsive if we had more than three data streams going on at the same time (when, for example, we were doing a few copies and streaming music at the same time). We suspect this is a limitation of the 800Mhz CPU that the box has.

From a basic NAS perspective, the Thecus N2310 is a solid performer at a good price point. The box starts to lose its luster a bit when you start using some of the software that's built into the device. The latest version of the operating system is Thecus OS6. I've never used any of the previous versions, but their website claims that this is a much smoother, easier to use interface than previous revisions. We find that a little bit scary because this is the main weak point of the N2310. 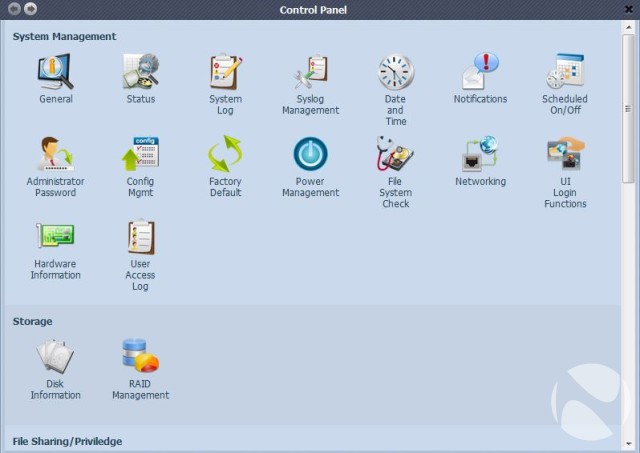 The main control panel looks dated and is clunky to use. Unlike most modern operating systems, the windows within the N2310 are a set size and can't be moved around the screen, and the individual tools you open from the control panel have limited functionality but take up a lot of real estate.

You can also install add-on programs like you can with Synology devices. Bittorrent, Plex, and others are on the menu, but instead of an integrated user experience, it feels like pieces have been bolted on to the side. Every time you load one of these applications, it feels like you're using an entirely different tool rather than something that's part of the N2310.

You also have to be careful not to overload the box. As mentioned earlier, in order to keep costs down, Thecus included a relatively slow processor, and while it works great for basic functionality, I often found myself having to wait when doing multiple tasks like copying files while working the interface. Thecus is on the right track here, but has some catchup to do on the software/application side.

You can also access your NAS device from the Internet, and Thecus helps by providing free DDNS service. While the setup is not for novices, the company does provide good documentation on how to get this up and running.

One feature that is pretty nice and works well is the "USB Copy" function. If you want to copy information from a USB drive, simply plug it into the N2310, press the copy button on the front of the device, and it will suck all of the data off of the drive and put it onto the NAS in the USBCopy folder. Unfortunately this feature isn't very useful unless you keep the NAS box near your desk, but for those who do, it's a quick and convenient way to move your files around.

Thecus set out to create a low-cost device that gives home users the ability to centralize their data. If you're looking for a box to backup your files to and want a low price, the Thecus N2310 delivers. The basic functionality and performance works great for a normal household and the box seems pretty reliable for the month I was running it. At less than $200 without drives, the N2310 is a good deal.

The lack of refinement in the interface is a pretty big negative, but since it's "just" software, is something the company can hopefully address in upcoming revisions of the operating system. If you have a larger household and will use your NAS frequently, you're probably better off going with a more powerful device that is easier to use.

Overall, I think Thecus is on the right track with the N2310, and with a few refinements they might be able to make a good name for themselves in the home NAS market.