Google claims their free email service, Gmail, has "lots of space" and according to many it's almost impossible to run out of room given the search giant is increasing the amount of space available almost every day. One intuitive company decided to put the myth to the test and discovered both what it takes and what occurs when you reach your Gmail storage limit.

Backupify, a company who provides the capability to backup all your online data and profiles across a number of sites including Google Apps, Twitter and Facebook, tasked an employee with the job of attempting to run out of room in their Gmail account.

"Here at Backupify, we have to do some crazy things to test the limits of our software.  Often it requires us pushing cloud services to their own limits to see what happens," Backupify wrote on their blog about the challenge. "As a result of this testing, we recently found out that yes, you can run out of space in Gmail."

The employee received almost one million emails with a total size of 7532 MB and usage of 99% in his Gmail inbox before being shown warning messages informing them they were running out of room.

So what happens when you reach the storage limits of your Gmail account? When you login you'll receive a warning message, which says "You have run out of space for your Gmail account. You will not be able to send or receive any emails until you delete some items." Google then links you to a page in their support forums providing a number of tips on how to reduce the amount of emails you've stored.

The bottom line? As was discovered in 2009, the myth simply isn't true. Although you'd need to be receiving an almighty amount of emails and for most users storage will never be a problem, you can officially run out of room in your Gmail account. Until they increase the storage limit of course, or you buy an additional amount of space to use, that is. 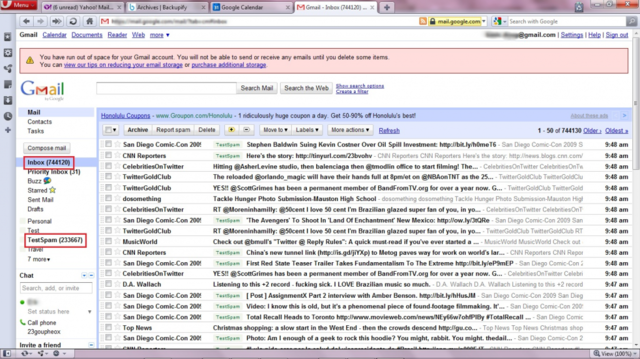 Gmail can run out of room. (Image Credit: Backupify)