Back in June at its next@acer event, Acer announced its new Enduro brand. For the first time, it was planning to compete in the rugged PC market, which is largely dominated by Panasonic. Along with a few tablets, the two laptops it introduced were the Enduro N3 and Enduro N7.

While the N7 is a fully rugged device, the Enduro N3 is more of a semi-rugged PC that's meant to be more thin and light. Of course, you wouldn't call it thin and light by any other standard. It weighs in at 4.37 pounds, and it's nearly an inch thick. But it'll sure take a beating.

It also has sealed ports for its IP53 water resistance rating. There are some key things that it doesn't have though, such as a hot-swappable battery and 4G LTE connectivity.

Like I said, you wouldn't call the Acer Enduro N3 thin and light by any other standard, except the rugged market. Indeed, when it comes to semi-rugged PCs, this is about as thin and light as it gets. To be clear, semi-rugged doesn't just mean MIL-STD-810G tested, because all of Lenovo's ThinkPads pass over a dozen of those tests, and they can be much thinner and lighter. 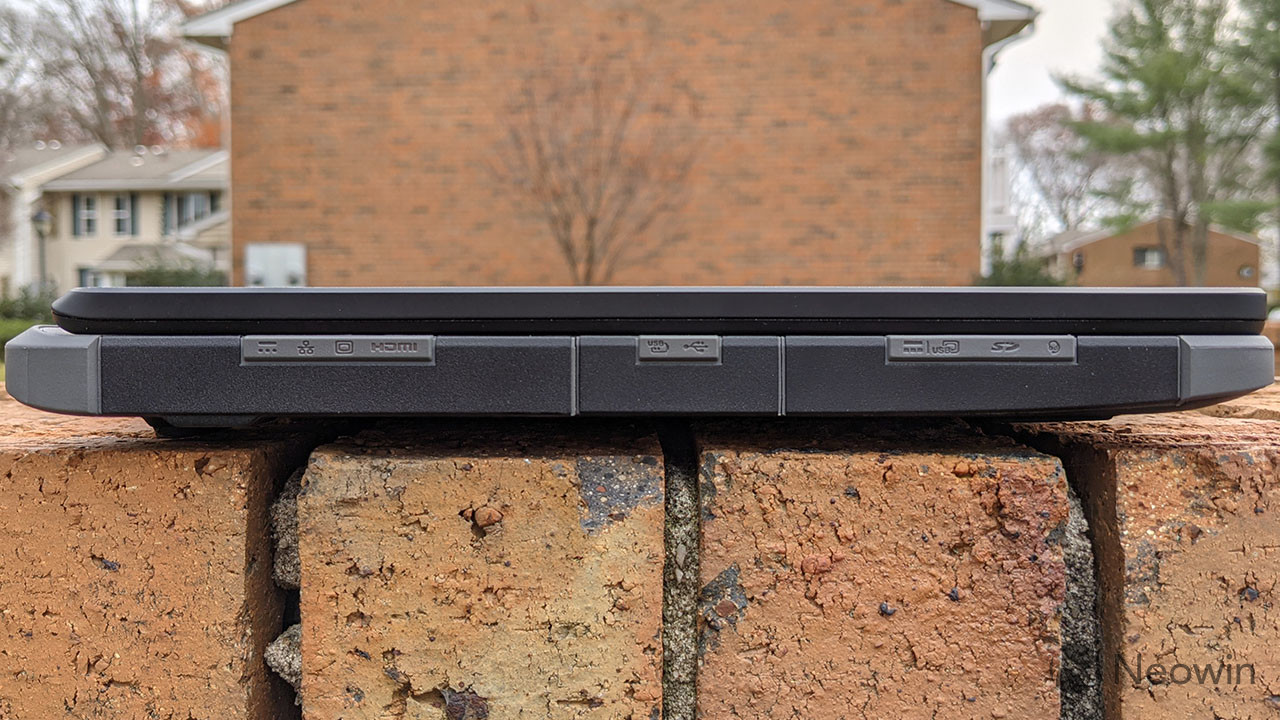 But this thing can take more of a beating. It can also go underwater with its IP53 water resistance rating. All of the ports are sealed, in fact. You have to flip open a lid to gain access to the ports. This is a common method of water-proofing a device. 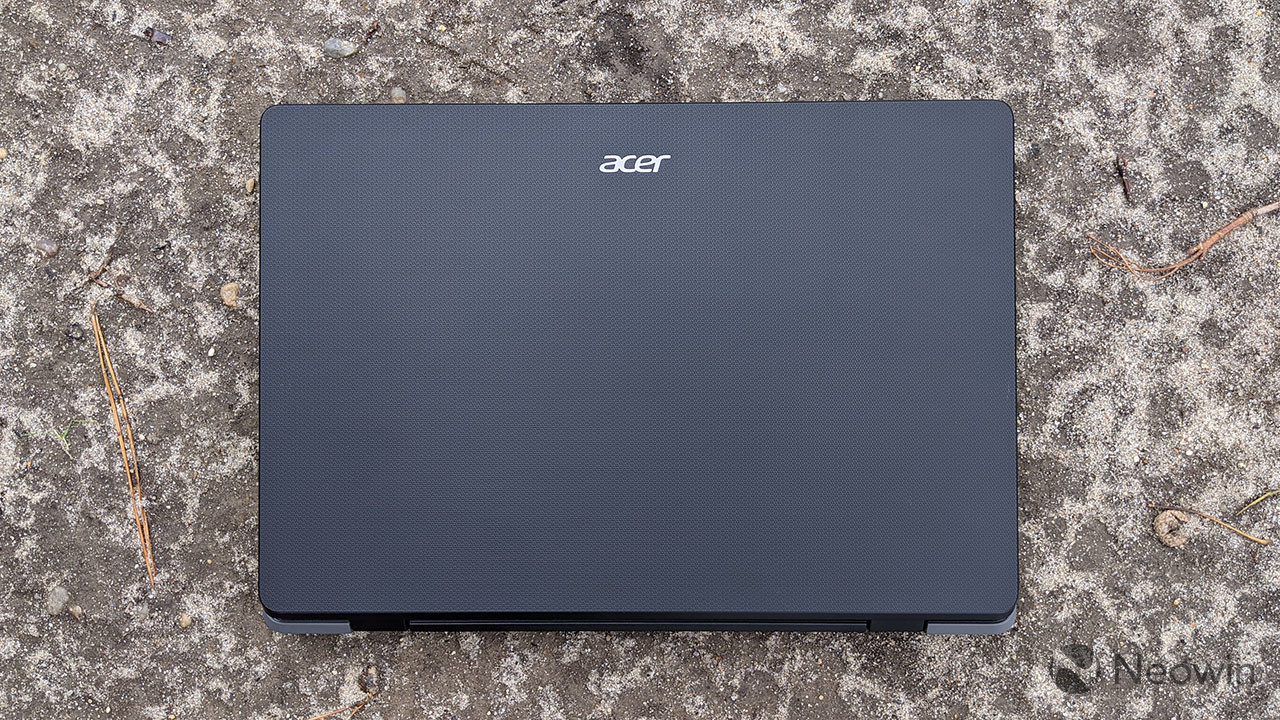 The color is black, and frankly, there's nothing sexy about the device. It's not like the Enduro N7 that looks more like a Panasonic Toughbook. Even the Acer branding on the textured lid is just a dull silver. If you're looking for something flashy, this really isn't that kind of device.

You'll notice that there are gray accents on the sides, such as the flaps the labels on the flaps that cover the ports. There are also gray bumpers on the corners of the PC, which help to protect it from drops. 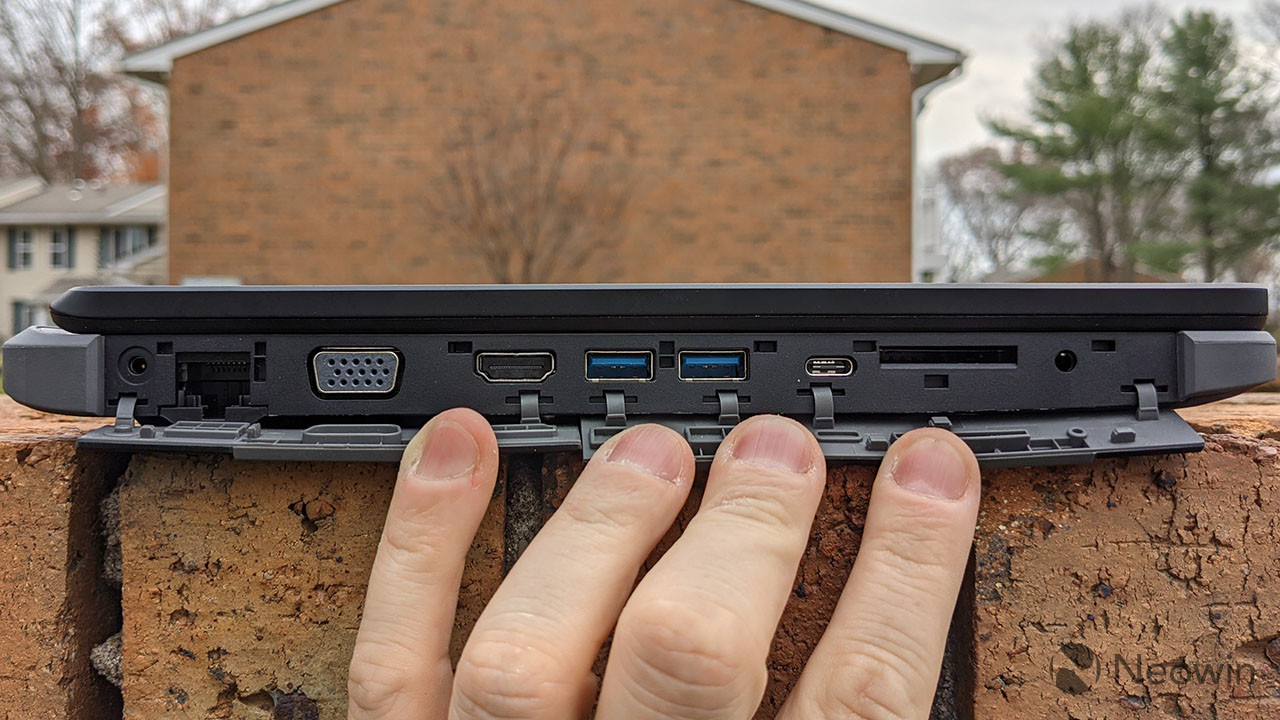 As you can see, it has plenty of ports, as a device like this should. It supports wired Ethernet, HDMI, and has three USB 3.2 Gen 1 ports for 5Gbps speeds. Two of them are Type-A and one is Type-C. By the way, I got those specs from an Amazon listing, since Acer actually didn't provide much in the way of specs for this machine. 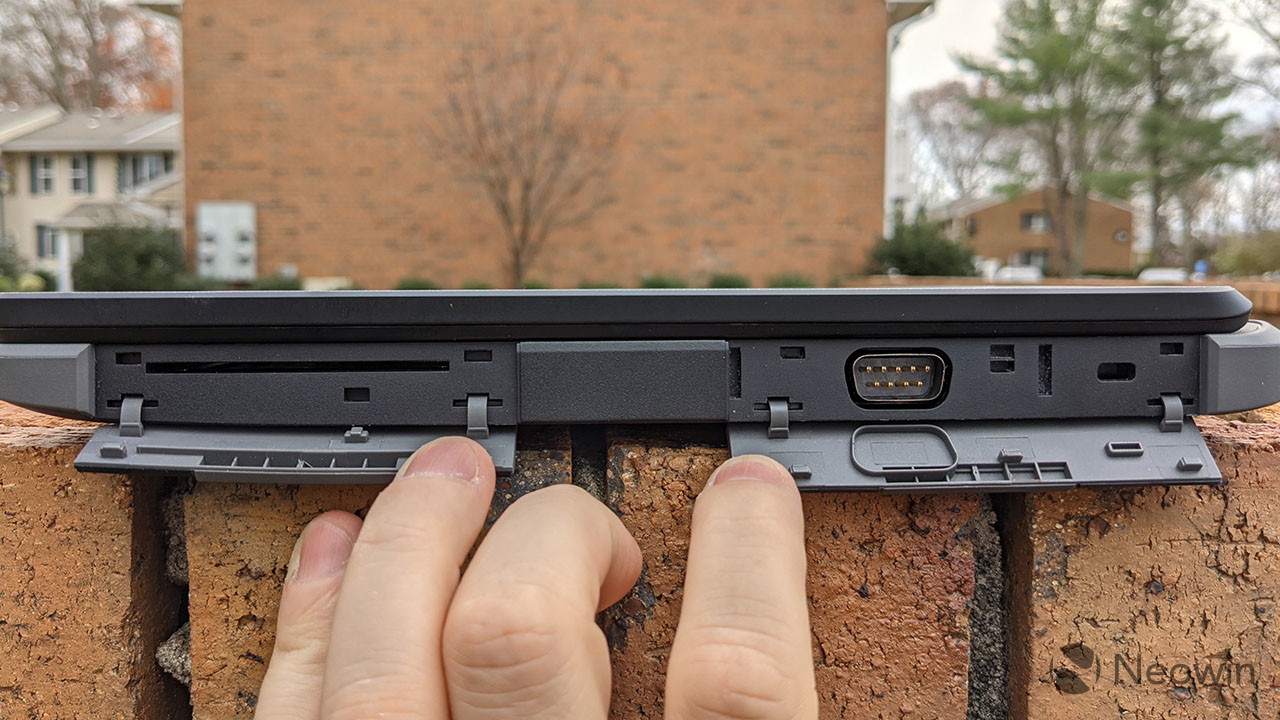 Note that while there's a barrel charging port and it comes with a barrel charger, you can charge via USB Type-C. It also charges a lot faster than most PCs, from my experience, and the battery life is pretty great, but we'll get to more of that later.

The design of this PC is purely functional, as there really isn't anything that's meant to make it pretty. It's meant to handle harsh conditions with its bumpers on the corners and closed-off ports. Unfortunately, there's no hot swappable battery, something that would definitely come in handy in the field.

The Acer Enduro N3 has a 14-inch FHD display that does not support touch, and this is another area where I feel like it falls behind Panasonic. Sure, touch is terrible if you're trying to use this thing in a sandstorm. No one wants false touches. But what could have been done here is Acer could have built software to turn the touchscreen on or off. I guess I'm just used to rugged PCs being made for a broader range of use cases. 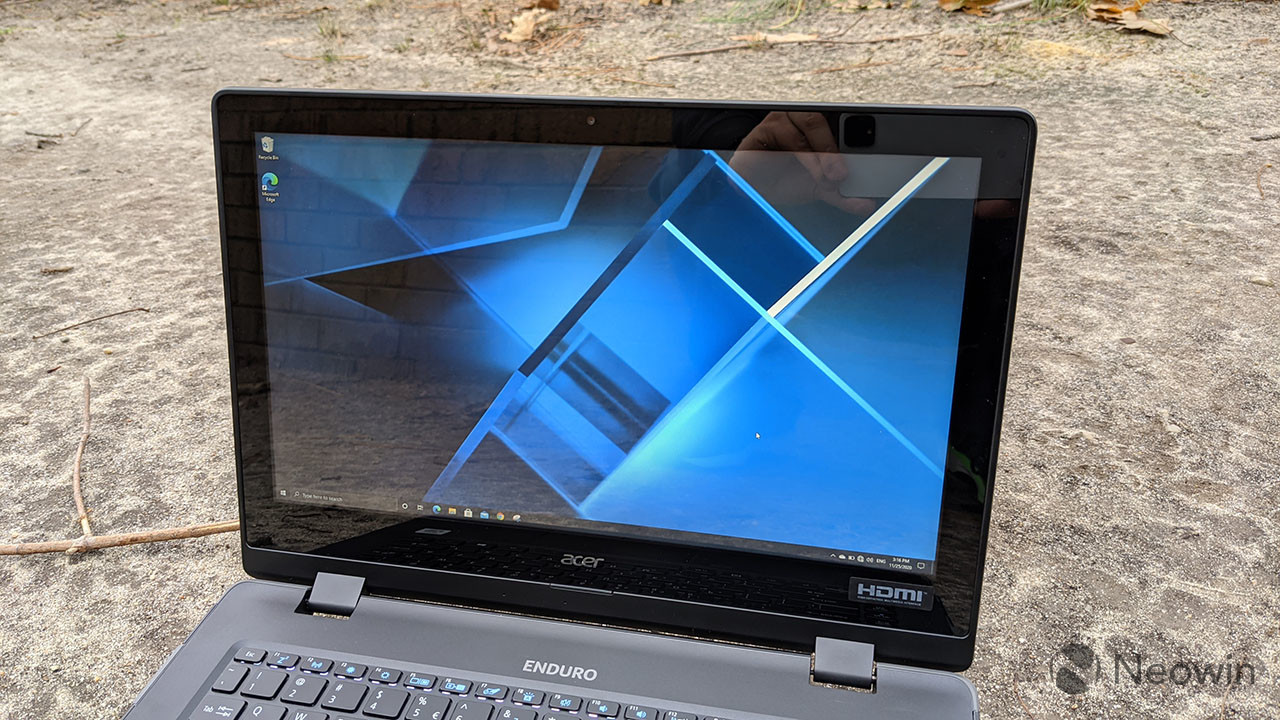 The display isn't particularly bright, a surprise for something where users might be using it outdoors. Acer says that it's aimed at architects, project inspectors, event managers, scientists, adventure sport lovers, and outdoor activists, so that's a pretty broad range of groups right there. You'd think they'd want a brighter screen, and I'm sure a hot swappable battery would help too. The screen is fine for regular indoor use though.

One thing you'll also notice about the screen is that it really has large bezels. That's no surprise given the form factor, but they really feel like they stand out. Every part of this machine seems to be function over form, which is a good thing. 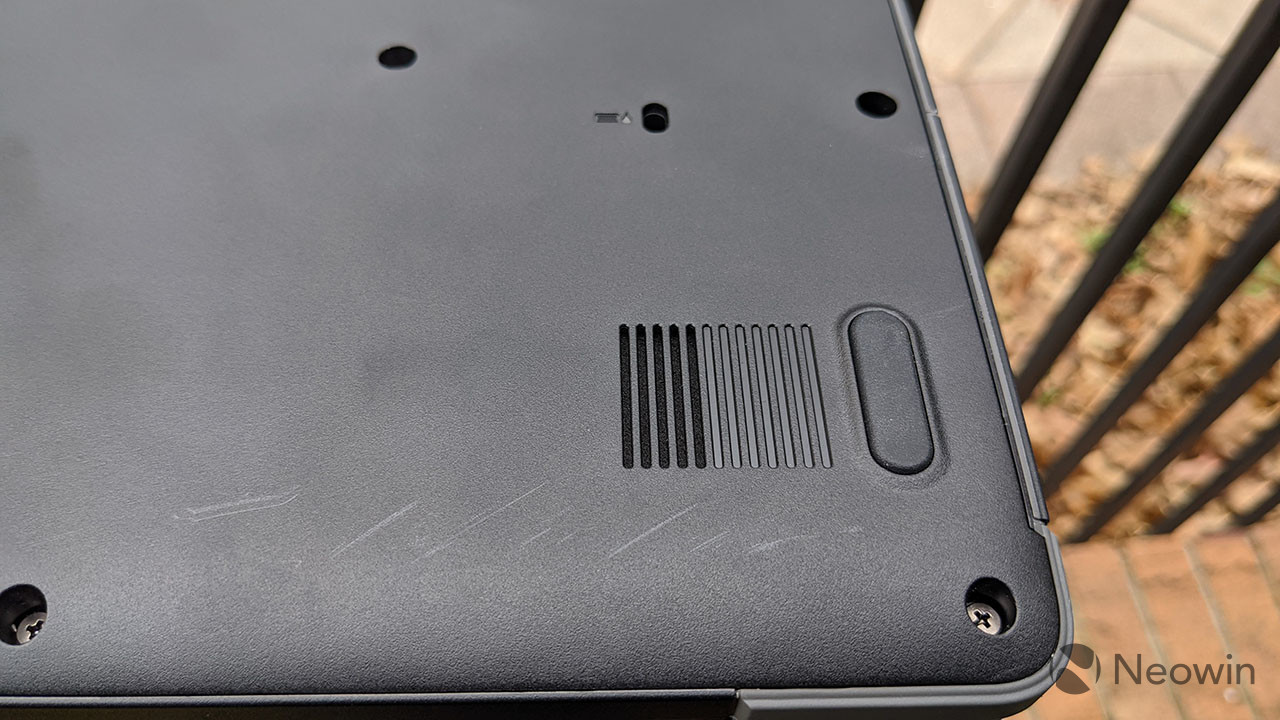 Audio quality is no different. Listening to music or watching movies doesn't sound particularly great, but it does get loud enough. In other words, if you're using it for calls, especially if you've got a loud background wherever you are, this gets the job done.

The keyboard is backlit, and it's pretty standard. There's nothing about it that really stands out, and it feels good to type on. It's comfortable, and it's accurate. I'm using it to type this review right now. 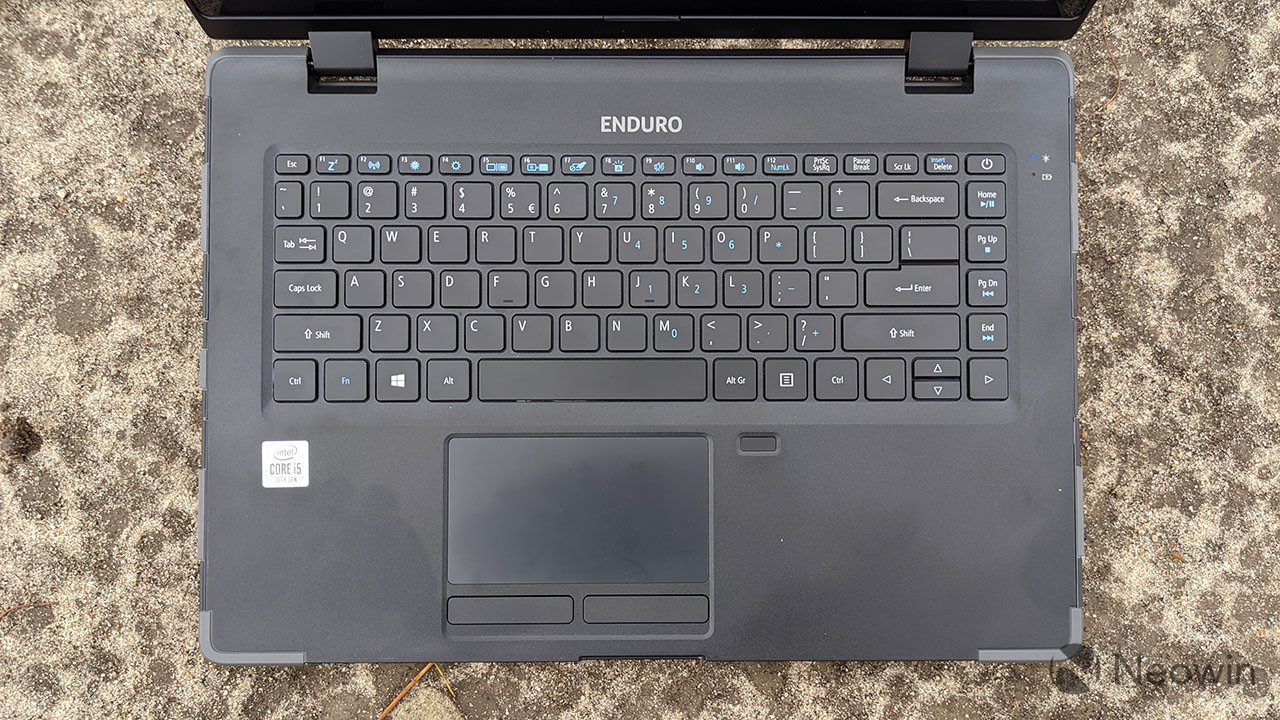 The trackpad is not clickable, something that I'm not personally a fan of but I understand why it's like that. It has two physical buttons instead, which are placed below it. I'm a big fan of physical buttons with trackpads. It just makes dragging and dropping easier. Unfortunately, it also means that we get a smaller trackpad. 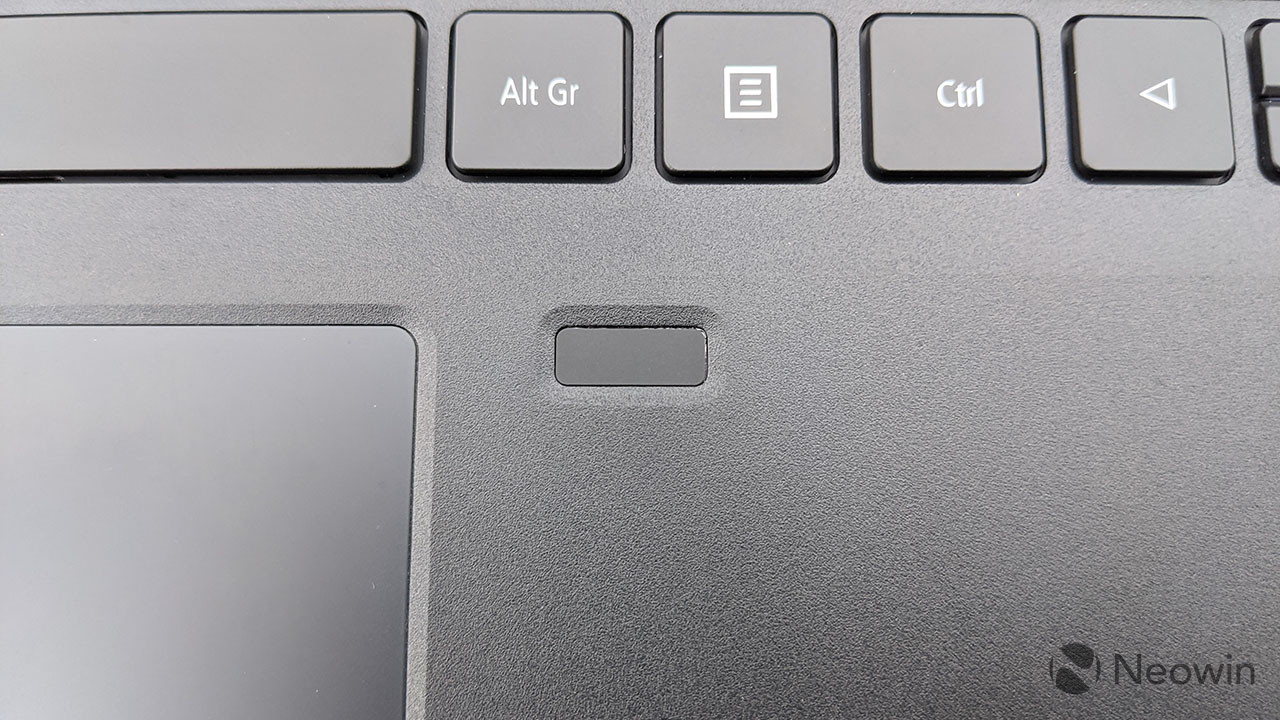 There's also a fingerprint sensor next to the trackpad, and it's the only method of biometric authentication that you're getting here. There's no IR camera for Windows Hello, but that's fine. At least there's something.

One thing that isn't an option is 4G LTE, which is really a shame. Again, when you start looking at the rugged category, a lot of outdoor use cases come into play. Along with the brighter screen and the hot-swappable battery, cellular connectivity could definitely be useful. These are Acer's first PCs in the rugged space though, of course. 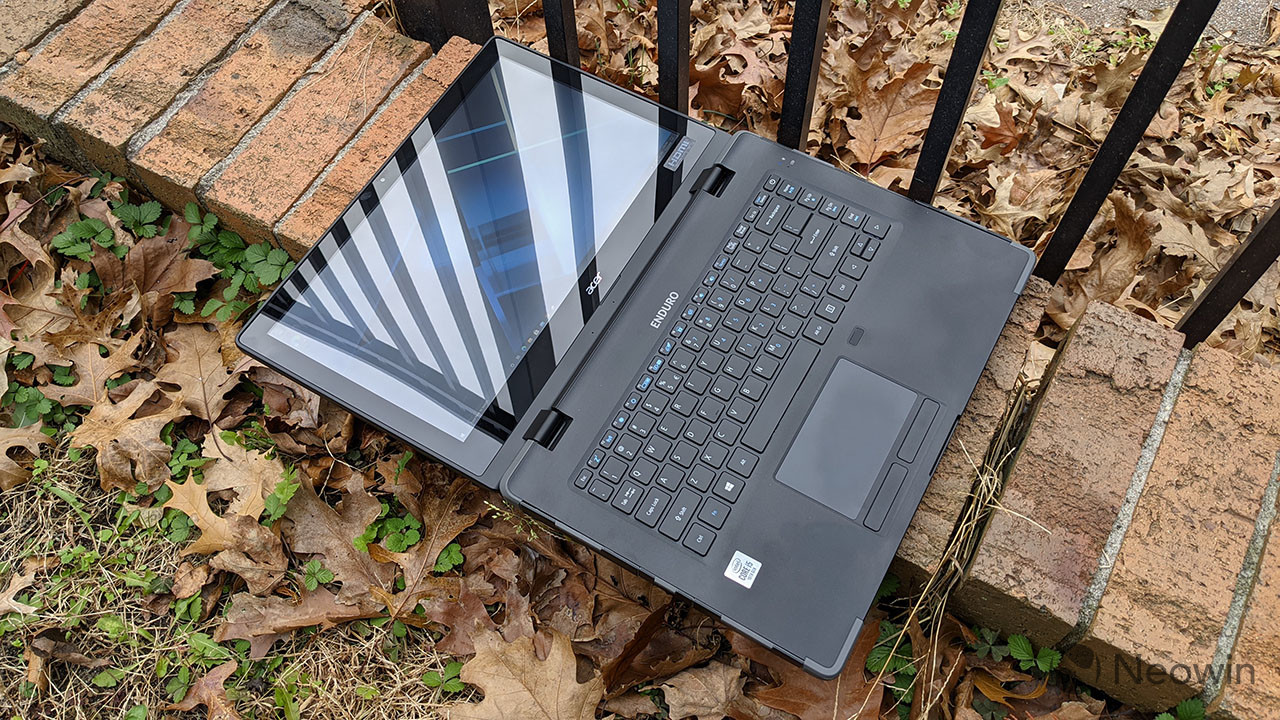 Performance in general is just fine, and it's about what you'd expect from a Core i5 and 8GB of RAM. Unfortunately, based on the spec sheet that Acer sent me, there's no option for a vPro variant, such as the Core i5-10310U or the Core i7-10610U. All CPUs are from the Comet Lake family though, a decision that usually gets made because Comet Lake has a vPro variant, so it wouldn't surprise me if that gets released at some point.

Battery life is actually better than I expected. I was able to get a solid nine hours of real-world work out of it. Acer didn't tell me how big the battery is, but the battery report says it's 48WHr, which isn't particularly large. I guess with the FHD resolution and the somewhat dim display brightness, long battery life was doable. Whatever the cause, it's a great quality in a semi-rugged laptop.

For benchmarks, I used the usual PCMark 8 and PCMark 10.

None of the scores are surprising. It's a fairly standard configuration, which is a Core i5 and 8GB RAM.

Acer's Enduro N3 is a solid semi-rugged laptop, and it's an excellent first try from the company. Honestly, there really isn't anything that stands out about it, hence the relatively short review. I think I made my point best when I said it's function over form. It seems to have been designed with purpose, and that purpose is being semi-rugged while being thin and light, relative to the rugged market. 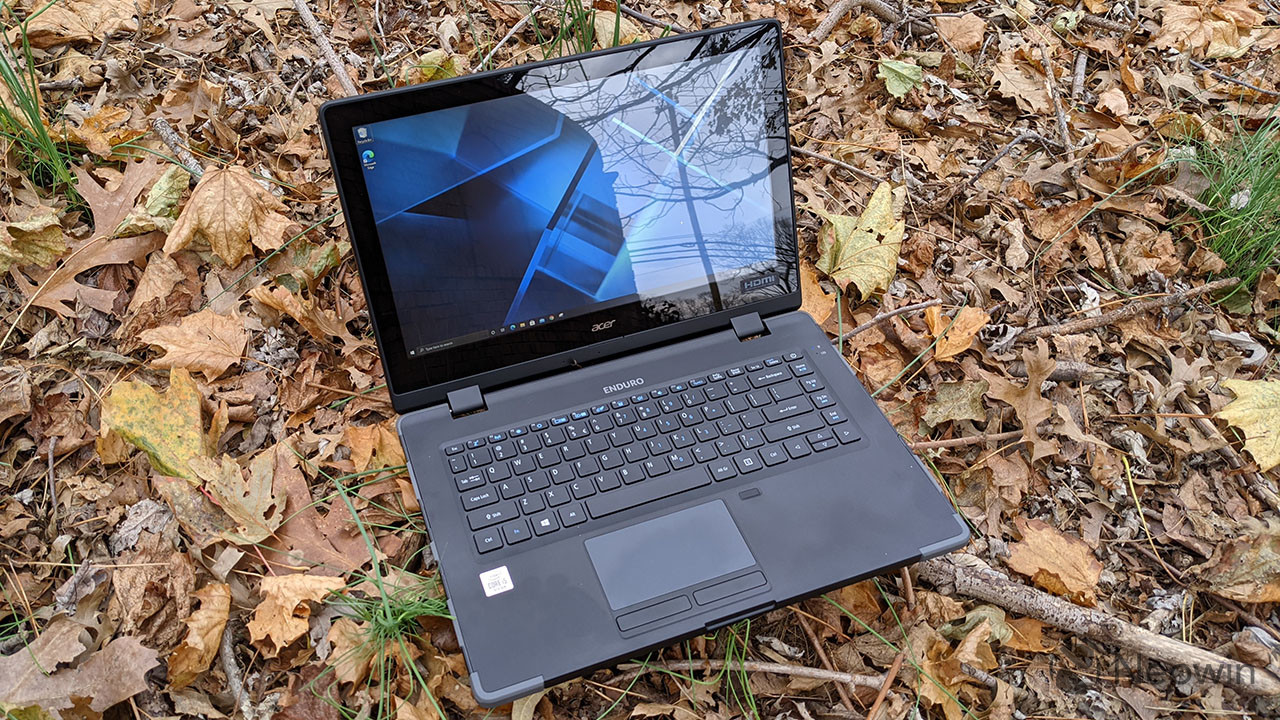 But I do think that the Enduro N3 is missing a few key features, considering the potential use cases. I'd like to have seen a brighter display for outdoor use, and of course, cellular connectivity. 4G LTE would open this up to first responders and more. I'd also like to have seen a hot-swappable battery, although I kind of understand why that gets taken out in favor of being thin and light. You'd need two batteries, easy access, and so on.

There's a lot of good here though. The display is a good one despite brightness issues in direct sunlight, and the overall package is pretty great. You get a lot of value for the starting price of $1,099. The IP53 water resistance rating means that it's dust-resistant and can handle jets of water. You can also drop it without worrying about it breaking, of course. In fact, I did that on video.

If you want to check it out, you can find it on Amazon here.