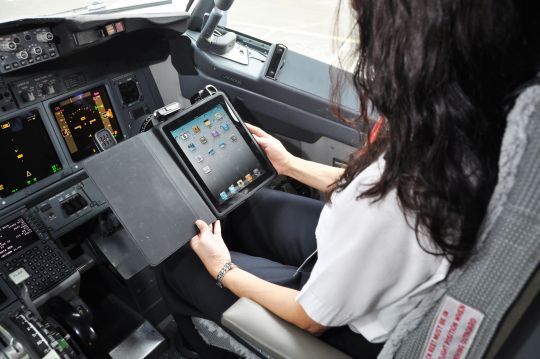 The iPad is already the most popular tablet-based PC product there is, by a long shot. Now the device is starting to actually replace paper manuals in some business fields. The latest such development in this area comes from Alaska Airlines. The company announced on Friday that its pilots will replace its paper flight manuals with iPads. The policy will be in place fully by mid-June and represents the first major US airline to make such a move.

Pilot manuals on paper are, as you might imagine, highly complex and detailed. They also take up a ton of space in a pilot's cockpit and weight up to 25 pounds, according to the press release. Alaska Airlines says that the pilots' iPads contain an app "that is loaded with PDF versions of 41 flight, systems and performance manuals, reference cards, and other materials." Updating the flight manuals will only take a tap on an iPad's screen instead of having to replace individual pages in a paper manual.

This likely the first of many developments to come in this area. More and more airlines are likely to follow Alaska Airlines lead. In addition, the company says it is also thinking about replacing  "paper aeronautical navigation charts with electronic versions on the iPad." According to the press release the combination of replacing the paper flight manuals and the paper navigation charts will save the company a whopping 2.4 million pieces of paper. Even the planes themselves will benefit as taking out all those manuals will make the aircraft lighter thus increasing the savings on fuel. Finally the press release says, "Further savings are expected from fewer back and muscle injuries caused by pilots carrying flight bags that can tip the scales at 50 pounds or more fully loaded."