AMD launched its line of Trinity processors today, which will be used in notebooks, desktops and embedded devices. The most obvious devices to make use of the new processors are ultraportables, given the power-saving nature of Trinity. The second-generation accelerated processing unit combines CPU and GPU cores on a single chip.

Among the features touted for the new processor include up to 12 hours of battery life, a CPU performance increase of up to 29 percent over the previous generation and an AMD Radeon 7000 series graphics core that will increase graphics performance up to 56 percent over the previous generation. AMD was clear in its press release that the processor would be competing in the ultraportable market, with Chris Colan, Vice President and GM of the company's Client Business Unit stating the following:

Our 2nd-Generation AMD A-Series APU is a major step forward in every performance and power dimension, allowing users to enjoy a stunning experience without having to give up the things that matter to them most. This experience doesn’t stop at mainstream notebooks. It carries over into affordable ultrathin form factors featuring the latest in AMD Radeon graphics.

In a review of the new processor, Jarred Walton of AnandTech was provided with a test system featuring Trinity which is pitted against Intel's Ivy Bridge processor. Walton found that the 7660G featured in the Trinity processor proved to be 20 percent faster in gaming performance than the Ivy Bridge's HD 4000. In a test of 15 titles, Trinity came on top in 10 titles, whereas Ivy Bridge won only five. A chart from AnandTech comparing the two processors can be seen below. 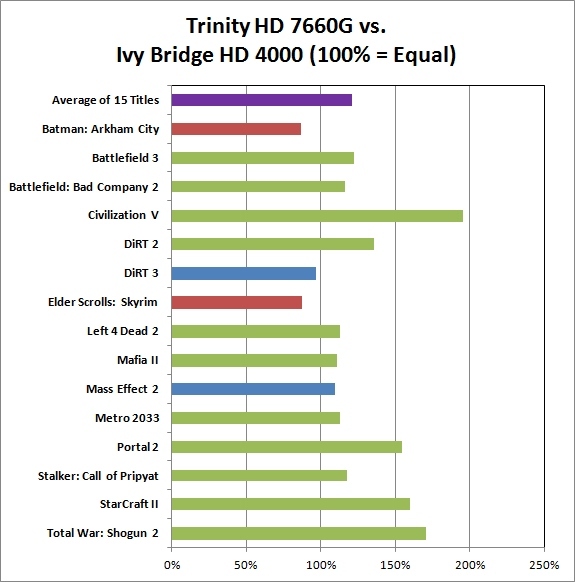