You don’t have to dig through pages and pages of Google to find users that aren’t happy with their ISPs globally. When it boils down to it, no one will ever be truly happy with the service they receive. Well now the American Consumer Satisfaction Index (ACSI) has found that US consumers are becoming increasingly unhappy with their internet service providers (ISP). 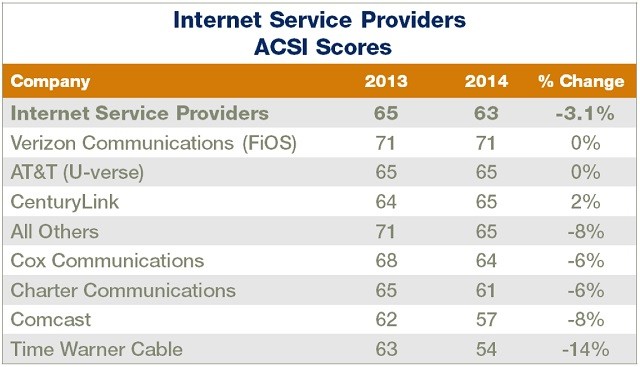 The most significant change is Time Warner Cable dropping 9% to 54 overall satisfaction rating in 2014, from 2013’s almost dizzying 63. Verizon Communications (FiOS) has been lucky, both topping the table with 71 and not dropping any percentage points. The only ISP to gain points was third placed CenturyLink, who gained 1% to take their overall score to 65.

While a good score is always going to be subjective – you might have no problems with your ISP’s service, but your John Doe friend might be fighting a constant battle with tech support – American consumer satisfaction with ISPs is lower than any other industry tracked by the ACSI. Dan VanAmburg, MD for the ACSI has said: 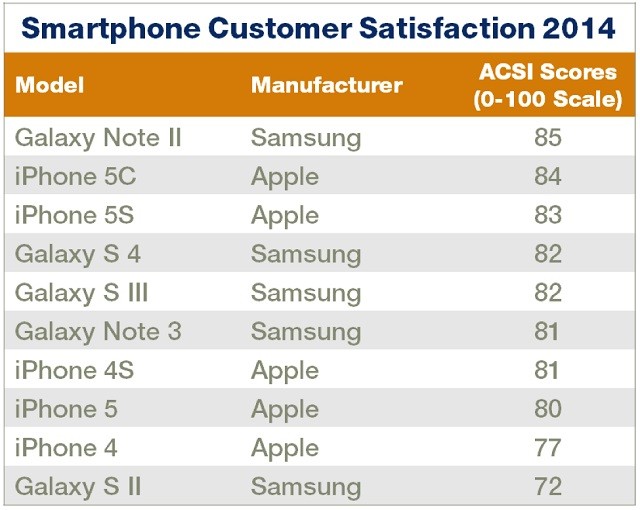 In addition to ISP satisfaction scores, the numbers for Smartphone Customer Satisfaction have been shown off. And guess who gets to gloat: Samsung. They take five of the top 10 spots, with the Galaxy Note II leading the charge at number one with an 85 overall satisfaction rating. The other five spots: all Apple. Most notably though, the (reported) flop that is the iPhone 5C in number two with 84 overall, beating out the iPhone 5S on 83. Unfortunately for Microsoft, Lumias didn't make the top ten.