Research firm iSuppli is making headlines again with a virtual teardown of the yet-to-be-released iPad. The 32GB 3G wireless iPad model contains a combined Bill of Materials (BOM) and manufacturing cost off $287.15, according to the report.

All six iPad models were given a cost analysis, with the lowest priced 16GB non-3G version totaling $229.35 and the 64GB 3G model topping the list at $346.15. As always, iSuppli's estimates are based on hardware and manufacturing costs alone, and do not include additional expenses, such as marketing, development, and licensing fees.

The top component eating up $80 is the display and touchscreen. Utilizing In-Plane Switching (IPS) technology, the display produces wider viewing angles than regular LCD screens. NAND flash, expected to be the second most expensive item in the BOM, ranges from $29.50 for the 16GB iPad to $118 for the 64GB model. Manufacturing costs are somewhere between $10 and $11.20.

Dr. Jagdish Rebello, senior director and principal analyst for iSuppli, noted, "At a BOM and manufacturing cost of $287.15, and a retail price of $729, the 32Gbyte/3G version is expected to generate the highest profit of any member of the iPad line on a percentage basis. The 32Gbyte versions of the iPad cost only $29.50 more to produce than the 16Gbyte versions, but their retail pricing is $100 higher. This shows that Apple believes the highest-volume opportunity for the iPad resides in the mid range of the product line."

The full teardown is as follows: 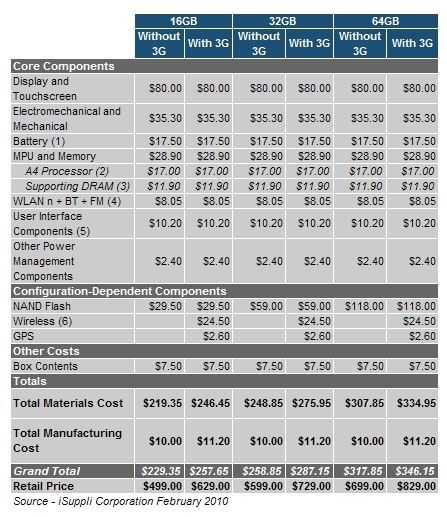