Keeping in tradition with its countdown to major milestones within its online stores (such as the One Billion App contest held last year), Apple has started its 'Countdown to 10 Billion Songs' promotion, obviously in anticipation of the 10 billionth song download in iTunes.

The promotion, which you can view in iTunes here, limits daily entries to 25 per person. You can enter by downloading or purchasing a song from the iTunes Store, or else you can submit an entry on Apple's website. The winner, selected after the 10 billionth song has been downloaded, will win a $10,000 iTunes Store gift card, which certainly isn't to be scoffed at, though the prize seems to be much smaller when compared to previous competitions; the One Billion App competition featured not only an iTunes Store card as a prize, but a range of hardware as well, such as a Time Capsule and MacBook Pro. A counter displaying the number of downloaded songs can be seen on Apple's competition page, as well as a list of the top 10 songs of all time in the iTunes Store itself.

If you'd like to enter the competition, which runs until the last song has been downloaded, you can purchase or download songs via the iTunes Store, or enter through the form found here. The rules for the competition are here, should you need to have a look at them (which is always recommended). You must be 13 or older to enter, and of course, you'll need to be in a country in which the iTunes Store can be found. 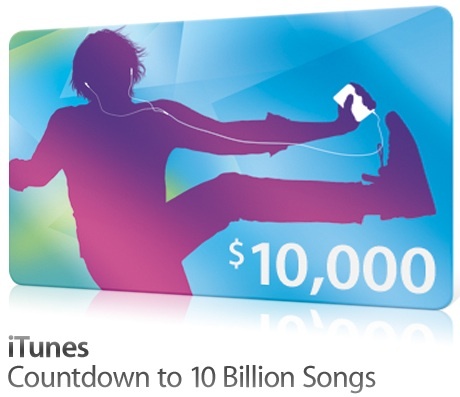