Bloomberg TV anchor, Matt Miller, was robbed by a reddit user of a Bitcoin during his show's "12 days of Bitcoin" segment where he intended to gift Bitcoin certificates worth $20 each to his co-hosts.

Matt planned to gift the $20 worth of Bitcoin to each of his co-hosts during the "12 days of Bitcoin" segment on his show. However, the moment he showed them the gift certificates, the QR code containing the private key for the amount caught the eye of Reddit user NastyMan9 who simply made a post about the gaffe. However, another Reddit user milkywaymasta had already snatched the Bitcoin by scanning the QR code by then. 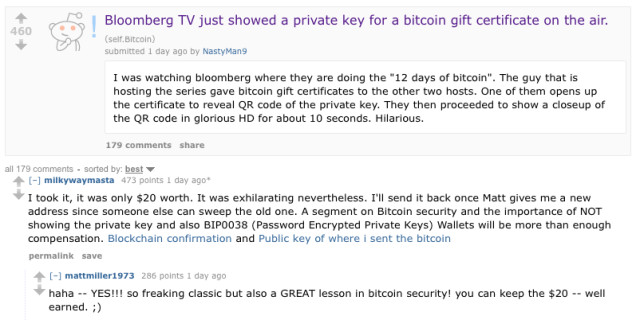 Although milkywaymasta offered to return the Bitcoin in his post, Matt replied to him through Reddit and urged him to keep it as a lesson to himself in security with the cryptocurrency.

With Bitcoin becoming more popular each day, users should be more careful with the currency and the transactions related to it. Recently, some Mac users were fooled into believing that the currency could be mined on their computers by a simple command which shows us that there is isn't enough awareness among the people yet.