BlackBerry is apparently becoming a bit more aggressive in defending itself against perceived threats, especially since its smartphones are still losing market share to iOS, Android and Windows Phone devices. This week, the CEO of the company, John Chen, personally slammed wireless carrier T-Mobile for an email promotion that clearly targeted BlackBerry users to dump their phones for an iPhone 5S. 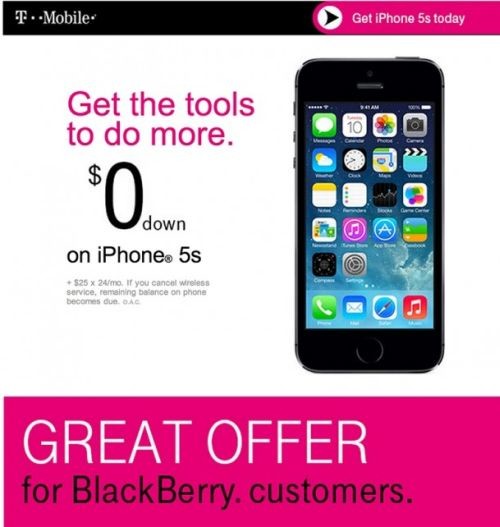 The email, which offered people the latest version of Apple's smartphone for $0 down, included a statement at the bottom: "Great offer for BlackBerry customers." That was enough for many BlackBerry fans to complain to T-Mobile on Twitter and Facebook, according to BBC.com.

On Monday, Chen made the unusual move of writing up a blog post that attacked T-Mobile's promo offer, saying, "I can assure you that we are outraged too. What puzzles me more is that T-Mobile did not speak with us before or after they launched this clearly inappropriate and ill-conceived marketing promotion." He also seemed to hint that the relations between BlackBerry and T-Mobile were currently a bit strained, but added, "I hope we can find a way forward that allows us to serve our shared customers once again."

For its part, T-Mobile apologized for any confusion that might have been generated from the email offer and added that it was still happy to be a provider of BlackBerry smartphones.