After the huge amount of iPhone and iPad news yesterday, things seem to be getting back to normal today. The release date for Back to the Future: The Game has been announced for December 22 on the PC and Mac, Sony announced a PlayStation app for Android and iPhone handsets, Microsoft sent over news of their Xbox LIVE schedule for the Christmas period, and we have even more iPhone and iPad releases in the form of Ultimate Mortal Combat 3, Real Racing 2 and TRON: Legacy.

Back to the Future release date announced

Telltale Games yesterday, announced the release date for the long awaited Back to the Future: The Game. The first episode will launch on December 22, following episodes from the first season will be released monthly. The game once again features Marty and the Doc taking time travelling to the limit. You can pre-order the game via the Telltale Games store and get a free collector's DVD once the season has finished. 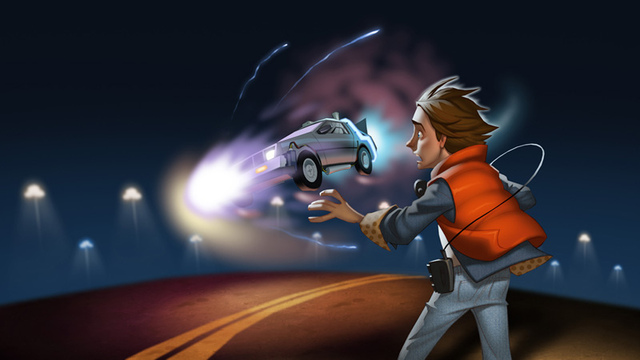 A new version of Xbox LIVE Extras has been released for Windows Phone 7 users. Details on what is new in the update are a little scarce at the moment, although it seems to be more of a bug fix release rather than adding any new features. This release bring Xbox LIVE Extras up to version 1.3.0.

Microsoft have released the long awaited version of Crackdown: Project Sunburst for Windows Phone 7, bringing with it geolocation features and multiplayer gaming. Puzzle Quest 2 from Namco has also been released on the Windows Phone marketplace at a rather expensive price of £5.99. Let us know if you have tried any of these new titles out.

One title we missed out mentioning yesterday was Real Racing 2, well we are glad to say that the game came out earlier today and is once again an excellent racing title. The new title sees up to 16 cars on the track at one time, along with enhancements to the career mode, new locations and improved graphics. Here are some more details on Real Racing 2:

Get ready for the most exhilarating handheld racing experience! Take control of 30 officially licensed cars, each with unique performance characteristics. Feel the thrill of authentic pack racing action in an incredible 16-car grid - the first on iOS!

◆ Enjoy well over 10 hours of gameplay in the massive career mode with time trials, head-to-head races, eliminations, single ‘cup' races, qualifiers and championships. Win races to purchase new cars and feel the difference with performance upgrades that affect handling. Work your way up from rookie to pro, or just jump into a Quick Race for instant fun.

◆ Find out who the real champion is! Enter auto-matched 16 player online races. Meet up with friends for 8 player local WiFi races. Compete on global leaderboards in Time Trials.

◆ Race in 15 beautiful locations, with 40 miles of highly detailed race tracks, speedways and city circuits including twilight and night races.

◆ Choose control options to suit your personal style. Earn the checkered flag with our intuitive and easy to master controls or take things up a notch by disabling all driving assists. Set anti-skid, steering assist and sensitivity, automatic or manual acceleration and brake assist level. Touch or tilt to steer. 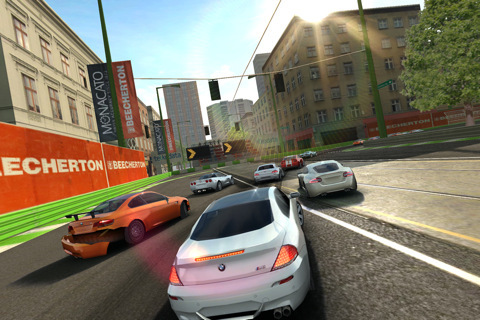 Electronic Arts have released Ultimate Mortal Kombat 3 for the iPhone and iPod touch. The game features all of your favourite characters as well as updated graphics that make use of the Retina Display on the iPhone 4 and the latest iPod touch. Hopefully the controls have been ported over well, so let us know how you get on with the game! Here are some more details:

The original arcade fighting game is available NOW! With 13 klassic warriors including Scorpion, Sub-Zero, and Sonya Blade; multiple game modes; kustomizable kontrols; and updated visuals aimed to maximize the high-resolution Retina Display...you can relive the brutal combos and vicious fatalities that made Mortal Kombat one of the most iconic videogames EVER!

10 Klassic arenas await in Arcade Mode pitting you against the top Mortal Kombat warriors. Kustomize your button layout and dominate your opponents in head-to-head battle. Then "Finish Him!" with epic Fatalities and humiliating Babalities.

MULTIPLAYER MODES AND BEYOND

Challenge friends in merciless head-to-head battles via local WiFi or Bluetooth®. Or rack up points in challenging timed battles against the treacherous Shao Kahn. 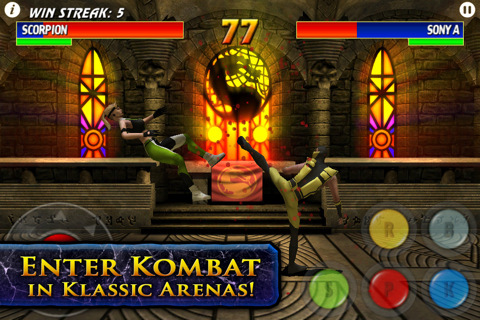 Disney has released a movie tie-in version of TRON: Legacy, from first glance it seems like a slightly cut down version of the PSP title. The game looks good graphically and costs just $.99 so may be worth a try. Expect our verdict on the game over the next few days, in the meantime, here are the details:

Welcome to TRON City, Program. Race high velocity 3D Light Cycles. Blast targets with the awesome power of a Recognizer. Your objective is not merely survival, it's glory.

TRON: Legacy unfolds as a series of competitions through 24 rounds. You will race the latest generation of 3D Light Cycles and fire cannons from the cockpit of the massive Recognizers. Score points to qualify for new contests and unlock new arenas.

Compete in standard races or time trials to qualify for the new challenges. Tilt to steer, touch to accelerate and brake. Use your Light Ribbon to block opponents and knock them off course. Deploy power ups like Shield Breaker, Arc and Cloak to gain an advantage. Tap for turbo boost.

Command an enormous Recognizer and patrol the GRID. Aim the cannon by tilting to move the targeting reticle. Tap to fire. Destroy object but be careful not to overheat. 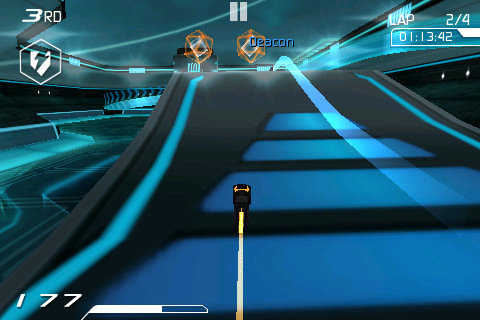 Hydrophobia to get a revamp

Hydrophobia developers Dark Energy Digital have released a little teaser that seems to indicate that their Xbox LIVE Arcade title will be getting a revamp in the not too distant future. The game divided many reviews, although most seemed to agree that the game did not live up to the hype, but it does seem that the company has listened to the complaints and a new version will be released soon. In the meantime, here is a clipping from the press released:

We have a new announcement regarding Hydrophobia coming up on Monday, and the countdown has begun at:

“Dark Energy is a community of gamers, and we want those that play our game to enjoy the experience. We'd like to thank everybody who has taken the time to produce feedback on our game. We've poured over the data from community feedback and analysed every review, comment or blog we could find. Nearly 250 reviews of the game were published, either in physical media or on the net. Some of them made good reading, while others were painful to read. However, to actively listen to the community, we cannot be selective in those we listen to, and there is no point in listening unless we are prepared to act. We have the purest of motivations and we will be announcing our detailed response at 11am GMT on Monday, so we'll be sending a press release your way then.” - Pete Jones, Joint Creative Director

Merry Christmas from everybody on the Hydrophobia team.

Microsoft PR have sent over details about their release schedule over the Christmas period. The releases include the Fable III: Dog Breed pack for 240 Microsoft points, the new Kinect Sports party pack and the Kinect Joy Ride Chevrolet Car Pack. Both of which will be released for free!. They also state that there will be three brand new Xbox LIVE Arcade titles from December 22. They are: A World of Keflings, Raskulls and ilomilo. The full details for the whole season are below:

The saying goes that you can't teach an old dog new tricks, but in “Fable III” you'll be able to give your furry canine companion a whole new look with the Dog Breed Pack, which releases later today*. Available for 240 Microsoft Points on Xbox LIVE Marketplace and the “Fable III” in-game store, the Dog Breed Pack comes with three new canine breeds to choose from: Poodle, German Shepherd and Doberman.

There's also a little something for your hero! In the spirit of the season, Lionhead Studios is offering a free Santa hat for all players to help get your “Fable III” hero into the Christmas spirit. So deck the halls of Albion and see what new adventures lie ahead! For more information on “Fable III,” visit xbox.com/fable3 and lionhead.com/fable3.

Celebrate the countdown to the New Year on Xbox LIVE.

Get ready for your New Year's Celebration with great entertainment and daily special offers from Xbox LIVE! From December 21 through December 31, make your Christmas season bright with fun family entertainment from Xbox LIVE, including Avatar Marketplace items, games, movies and more available for special discounted prices! Curious what will be offered? Here are a few clues… Work with Elvis in this classic, become a hero (that's not so super), fly to the rescue in outer space, or turn up the volume to get down! In addition to the surprise daily offers, we'll host 11 unique offers that will be available for the duration of the campaign!

The Gift that Keeps on Giving!

Don't forget to share exciting new Xbox LIVE Arcade games with friends and family! On 22nd December, 29th December and 5th January, Microsoft Game Studios will introduce three new downloadable hits, exclusively to Xbox LIVE Arcade and for gamers of every level. Invite friends and family to build a kingdom in “A World of Keflings,” race through bone-shaking levels in “Raskulls” and collaborate to help Ilo and Milo reunite in “ilomilo.” A new title will roll out for download each week, providing early access and unlocking exclusive characters in the other two games.

To access the Games for Christmas trailer, visit: https://www.youtube.com/watch?v=J2e5UP5p7eI

DEAL OF THE WEEK

Missing the outdoor fun in this weather?  Get ready to race around the world in high performance machines in “Forza Motorport 3,” from the McLaren MP4-12C and the Mercedes-Benz C63 AMG, to the 2010 Lotus Evora Type 124 Endurance Racecar, 2010 BMW Motorsport X6M and more! Then, go head to head against the greatest fighters that ever lived - all for 50-67 percent off!

Sony announced today that they would be releasing a free PlayStation app for both the iPhone and Android handsets. The app will allow users to check out their PlayStation Network trophies, friends games, online statuses, game announcements and will also have Facebook and Twitter features. The application will be released soon on the Android Marketplace and the iTunes App Store, so keep an eye out. 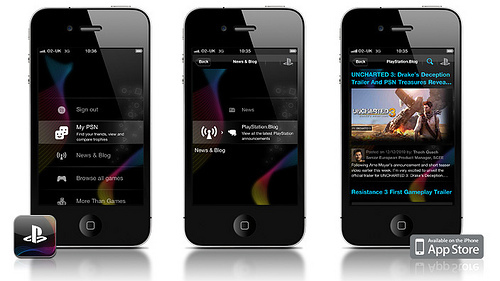