With the increasing popularity of dark mode growing across apps and services, Google started working to implement it in the wildly popular Chrome browser last year. The feature recently made its way to the stable channel on macOS, but Windows users have only been able to do it in the test releases.

Today, though, Google rolled out version 74 of the Chrome browser to the stable channel and it finally includes support for dark mode. For some users, at least. A user in the Chrome community forums reported that their browser wasn't switching to dark mode automatically after the update, to which a community manager responded saying that the feature is rolling out to some users, but wider availability will be coming soon (via The Verge).

If you don't want to wait, though, and you're not interested in joining the testing channels for Chrome, you can force the browser to run in dark mode by making a change in the browser's shortcut properties. To do this, you'll need to right-click on the desktop shortcut for Chrome and go to "Properties". In the properties window, you'll need to add "--force-dark-mode" at the end of the "Target" text box (after the quotes, too). 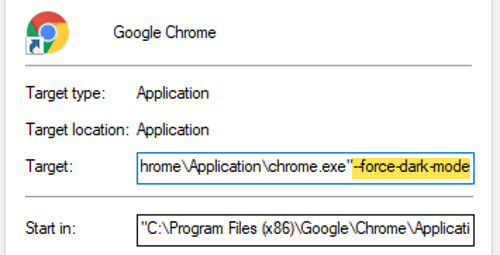 Once you've done this, the browser should start in dark mode the next time you open it using that shortcut. If you have also pinned Chrome to your taskbar, you'll need to unpin it and pin it again once you've made the change to the shortcut target. This also won't work if you run Chrome directly through the executable file.