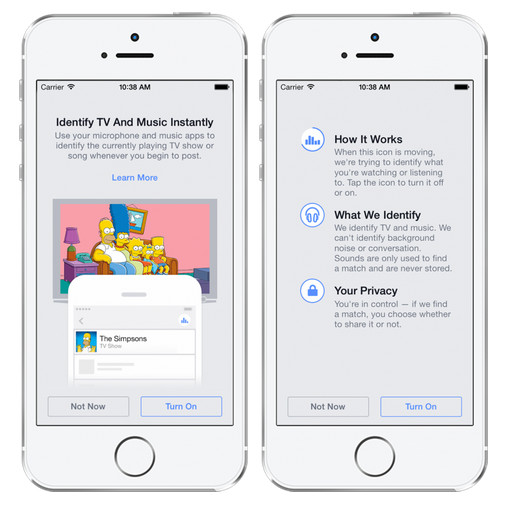 Facebook has recently updated their mobile app for Android, allowing for the company to record 'passive noise' from a smartphones microphone. Although slightly disconcerting at first, Facebook promises that privacy is of the upmost importance and will be respected. The new feature aims to figure out if you're listening to a particular song or watching a TV Show, which will then appear alongside your Facebook post.

A video from Facebook showing off 'A New, Optional Way to Share and Discover Music, TV and Movies​'

The latest feature could be a nice addition if it functions as initially intended. However speculation has arisen and many argue that the 'passive noise' could be stored in the Facebook servers and sold to advertisers. Facebook has made a rebut claiming it's not possible, due to an encrypted 'Audio Fingerprint' system integrated in the design. It's important to note however that the service is completely optional and can be turned off with a click of a button.

An official release from Facebook provides an explanation of the feature, saying:

When writing a status update – if you choose to turn the feature on – you’ll have the option to use your phone’s microphone to identify what song is playing or what show or movie is on TV. That means if you want to share that you’re listening to your favorite Beyoncé track or watching the season premiere of Game of Thrones, you can do it quickly and easily, without typing.

A recent petition has turned a few heads, attracting over 560,000 users to sign a form against the update. Nevertheless the 'passive noise' feature is now available for Android devices, so it's clear Facebook truly believes the service to be worth its controversy.

The Facebook app for iOS has yet to be updated, but will include the service for sure. Windows Phone should see the feature integrated in the future, however Microsoft made the application so we cannot vouch for the update. We'll keep you posted if we hear any more news regarding the new service so keep your eyes peeled.