A couple of days ago, UK network EE revealed that Samsung's new Galaxy S6 and Galaxy S6 Edge smartphones would be the first to get Wi-Fi Calling and today, iPhone customers were treated to the service as well. According to CoolSmartPhone, EE have been adding the feature to customers' accounts over the past week and Apple's iOS 8.3 update this evening has enabled the feature ahead of the planned launch alongside the Samsung handsets.

There is a small catch though - apparently the feature doesn't play well with Apple's Continuity feature where you can answer calls for your mobile number on any device. When attempting to switch on Wi-Fi calls, a prompt informs you that Wi-Fi Calling disables this option. 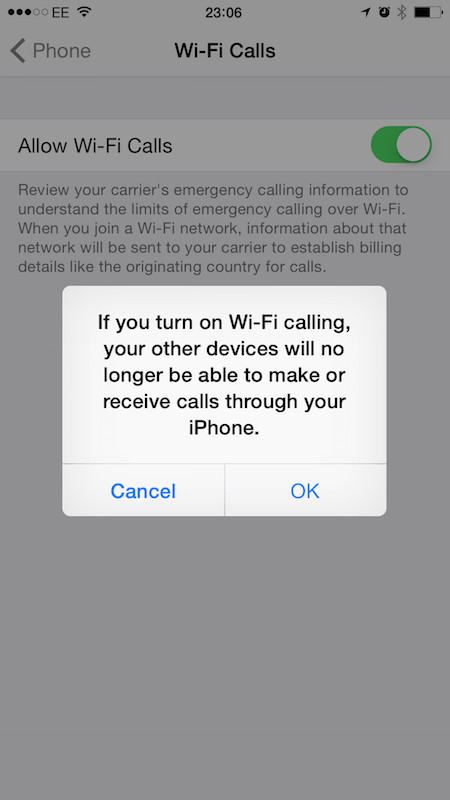 Wi-Fi Calling allows you to make and receive calls and texts over a Wi-Fi network using your existing mobile number and can be very useful when you have limited signal but a strong Wi-Fi network. Rival networks Three and O2 both offer Wi-Fi Calling through a downloadable app - named inTouch and TuGo respectively - but EE will be the first network to be integrated directly into the handset's software.

Some conspiracy theorists may suggest that Apple released the update early because EE focused on Samsung's new flagships, but what do you think? Let us know in your comments below.