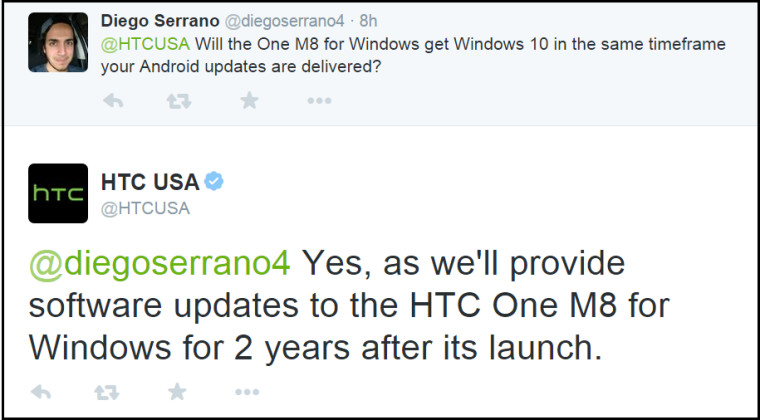 Arguably one of the sexiest Windows Phone handsets ever made, the HTC One (M8) for Windows was the Windows equivalent of its sibling and last year's award-winning Android flagship, the HTC One (M8). Whilst the Windows version wasn't made widely available around the world, there are still a number of users wondering whether they'll be treated to Windows 10 when the OS gets released.

Today, HTC USA's Twitter account confirmed that the HTC One (M8) for Windows will get the Windows 10 update and said the move was part of the company's commitment to supporting the One (M8) for Windows with software updates for two years after launch. The handset launched last November meaning it should be supported for another 18 months.

Securing a Windows version of the One (M8) allowed Microsoft to offer a competitive and stylish alternative to its own Lumia range but whilst it initially showed promise of a wider range of Windows Phones, there's been a distinct lack of non-Lumia alternatives.

There's no word on how long it will take HTC to release the Windows 10 update after it's made available but given that Microsoft are still trying to port the preview over to non-Lumia devices, it's quite likely there might be a delay in store.