We've seen an explosion of new brands and products in the TWS market over the last few years. Enacfire is one such brand that caters to the budget range of audio devices. With most Enacfire devices priced below $50, the Enacfire E90 wireless earbuds are the Shenzen-based company upper-tier offering.

For an inexpensive price tag of about $50, the Enacfire E90 earbuds tout 48 hours of playback, IPX8 water resistance, USB Type-C fast charging and boosted bass to knock the listener's socks off. There's been a good amount of chatter regarding the E90 wireless headphones, so let's find out what all the fuss is about.

Now before I go into further detail, I want you to keep in mind that we're talking about some very affordable wireless earbuds. This is important because of the balance of the price against the value of the Enacfire E90 earphones. 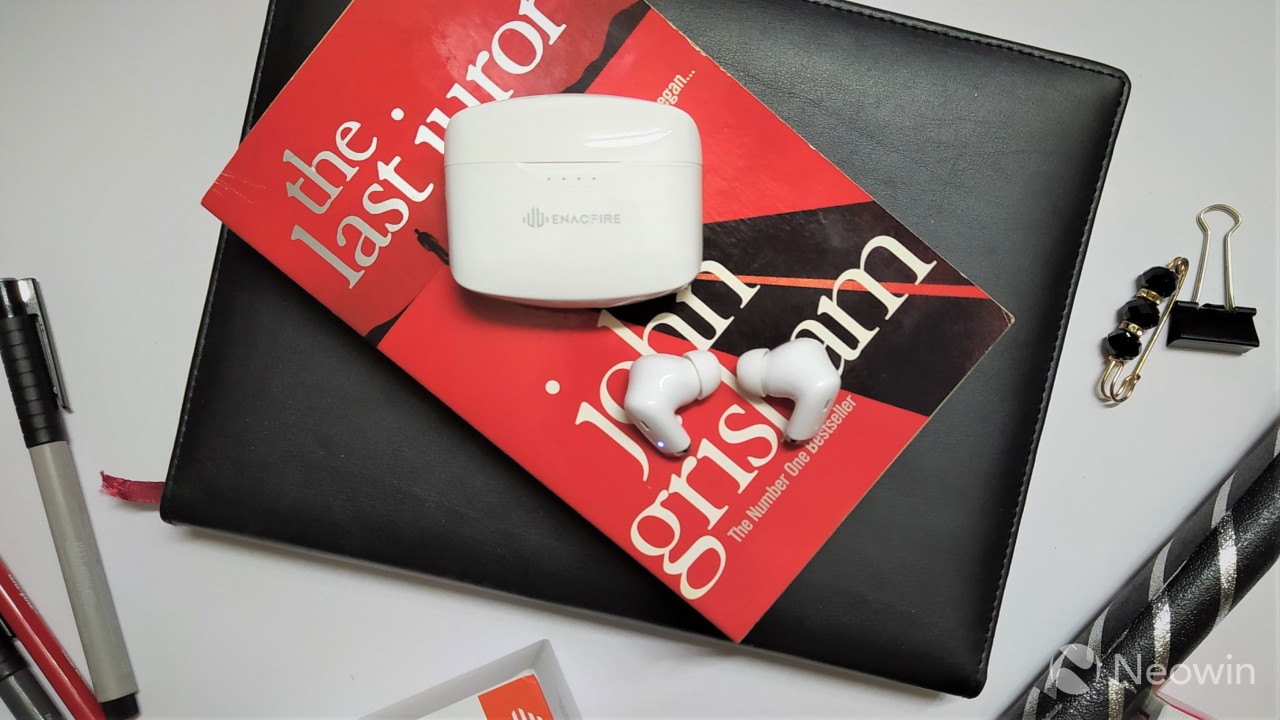 The Enacfire E90 true wireless earbuds come in a glossy white finish and the material used is plastic. The charging case features the same colours and materials and has a rectangular shape with curved edges. Contrary to what this might indicate, none of the parts look or feel that cheap. The earbuds have a very strange shape and they look very uncomfortable, but once worn they fit in the ears just nice. I think the uniquely shaped heads help the buds to stay in place because these things don't ever fall out.

Each earbud has an LED light and houses one mic each for better audio quality during calls. There are no physical buttons, only touch controls on both earbuds which I found very easy to use. On the front of the carrying case, there are four tiny LED lights to indicate the battery level. Meanwhile, on the back of the case, there's a USB Type-C port for charging.

I was very pleased with how lightweight the headphones were, even when accounting for the wight of the case. They weigh an unbelievably light 4.5 grams which makes it really comfortable to carry and wear them for long hours. Another feature which really sweetened the deal for me was the IPX8 waterproof rating. I live in a country where it rains quite a lot so water resistance is nearly essential. 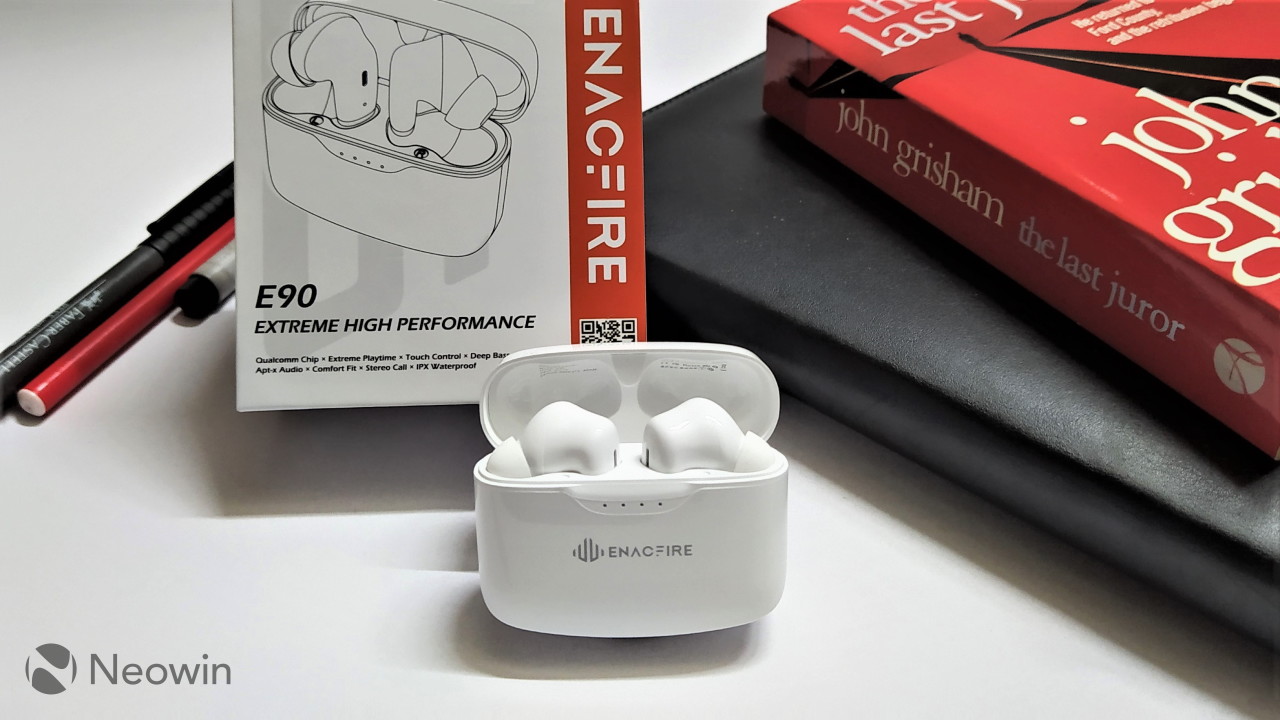 Moving on to the juicy bits, the Enacfire E90 use the Qualcomm aptX technology to deliver high-quality audio efficiently. It uses low latency which reduces audio delays over Bluetooth connection. Now, this is something I've faced before in some of the lower-tier TWS earphones. To my delight, with the E90 buds, this did not happen.

The Enacfire earbuds have two microphones, one on each bud. This serves two purposes, one is to enhance voice transmission and the other is to enable users to use either bud standalone. The CVC 8.0 noise cancellation feature cuts out background noise while making calls. I used both earbuds together and individually to answer calls and both experiences were good. Nothing extraordinary, but a little above average in the budget range.

I was very satisfied with the overall sound delivery and quality of the E90 headphones. They have boosted bass which is something bass-loving audiophiles will appreciate. I cannot stress this enough, bass is really something on these earbuds. 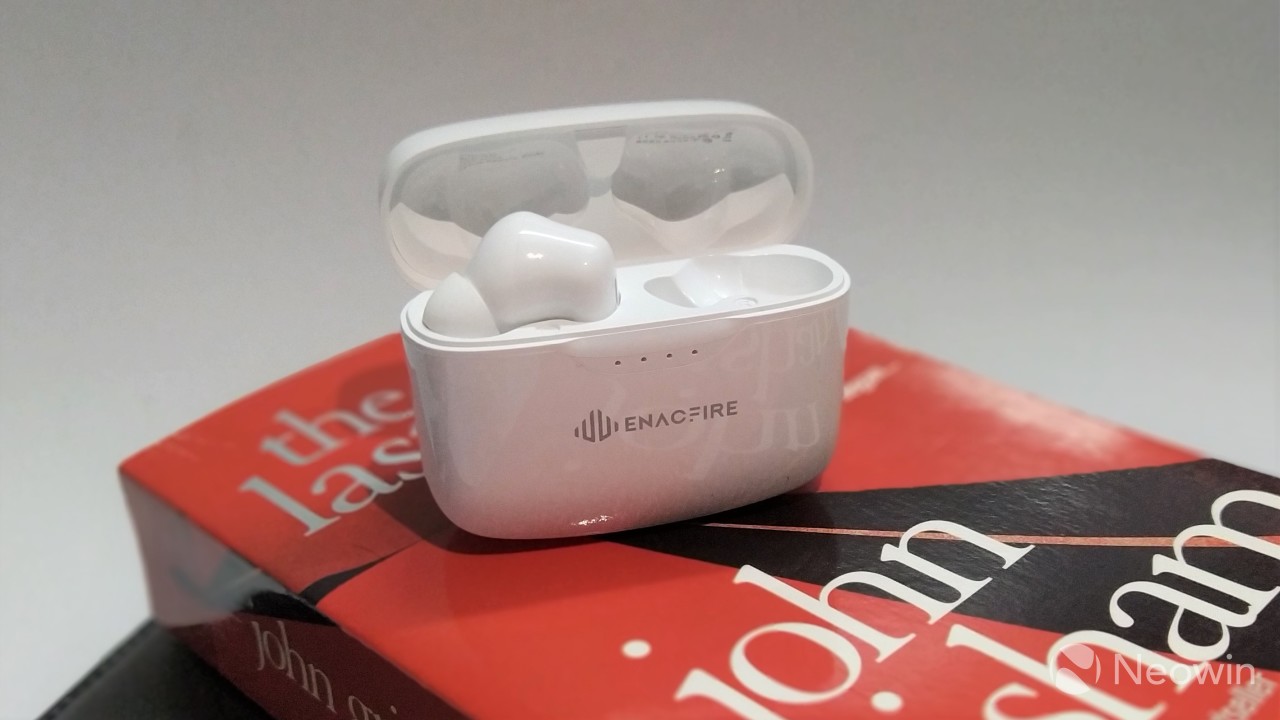 Let's talk about other aspects of sound quality. I was actually impressed by the audio delivered by the Enacfire E90 buds because they're so cheap. I was happy with the levels of clarity and crispness even on very high volumes which is something budget earphones struggle with. I would describe my listening experience as lush, rich and punchy.

But I must say, at the point when you max out the volume, the audio quality does drop a notch and the sound becomes a bit grainy. This is to be expected, I mean the Enacfire wireless earbuds are less than half the price of premium TWS brands like Apple or Sennheiser.

I did, however, manage to fix this with a dynamic equalizer. Enacfire does not have its own companion app so I used a third-party app. All in all, at the end of the day, they perform satisfactorily and get the job done surprisingly well. 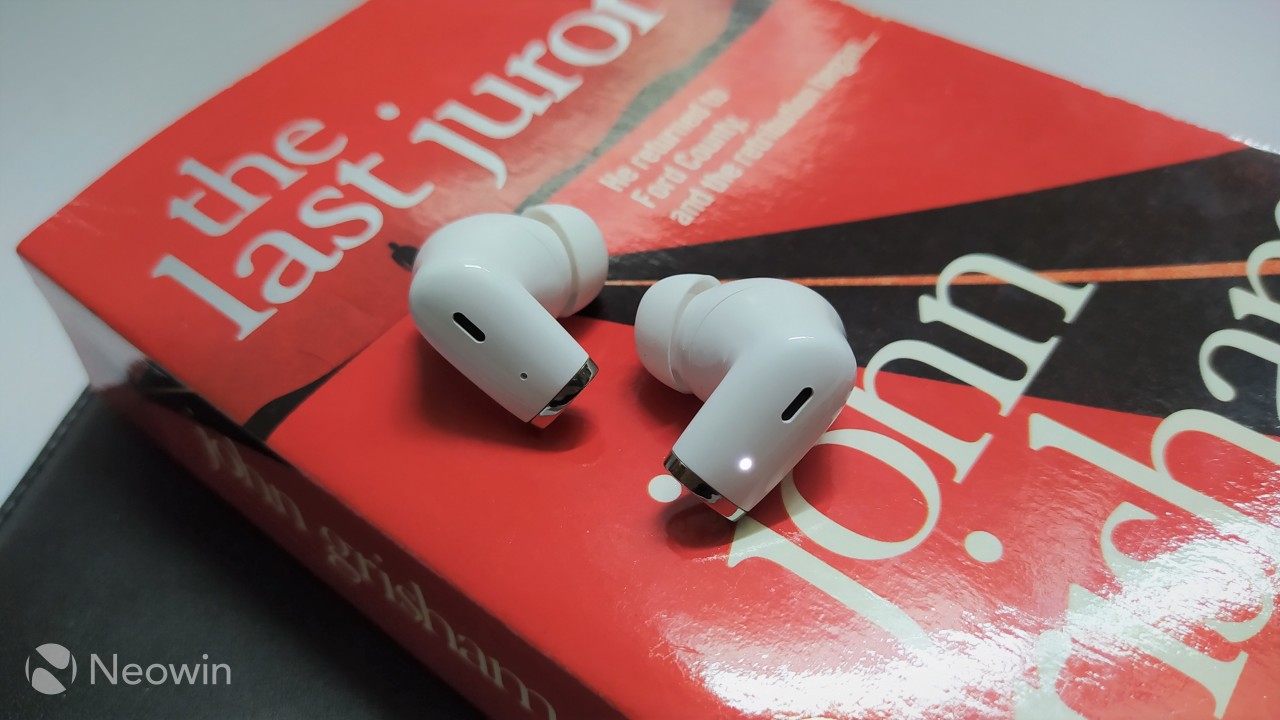 Enacfire states that the E90 earphones offer 8hrs of playback at a time, extended up to a generous 48hrs when taking the charging case into account. I decided to put this to the test, well a crash test to be more accurate, and my results were pleasing.

I started with a full 100% battery and began my day, with very heavy use. Just to see how long it would take to drain completely, I left it on for hours. When I wasn't using them, my brother was or the earbuds were just sitting around blasting music on full volume with no one listening. Almost the whole time they were on, they were playing something or the other.

Taking the case into consideration, the E90 buds gave out after two entire days - 49 hours and 42 minutes later. I probably got over 35 hours of playtime from them collectively, with most of the testing done at max volume. 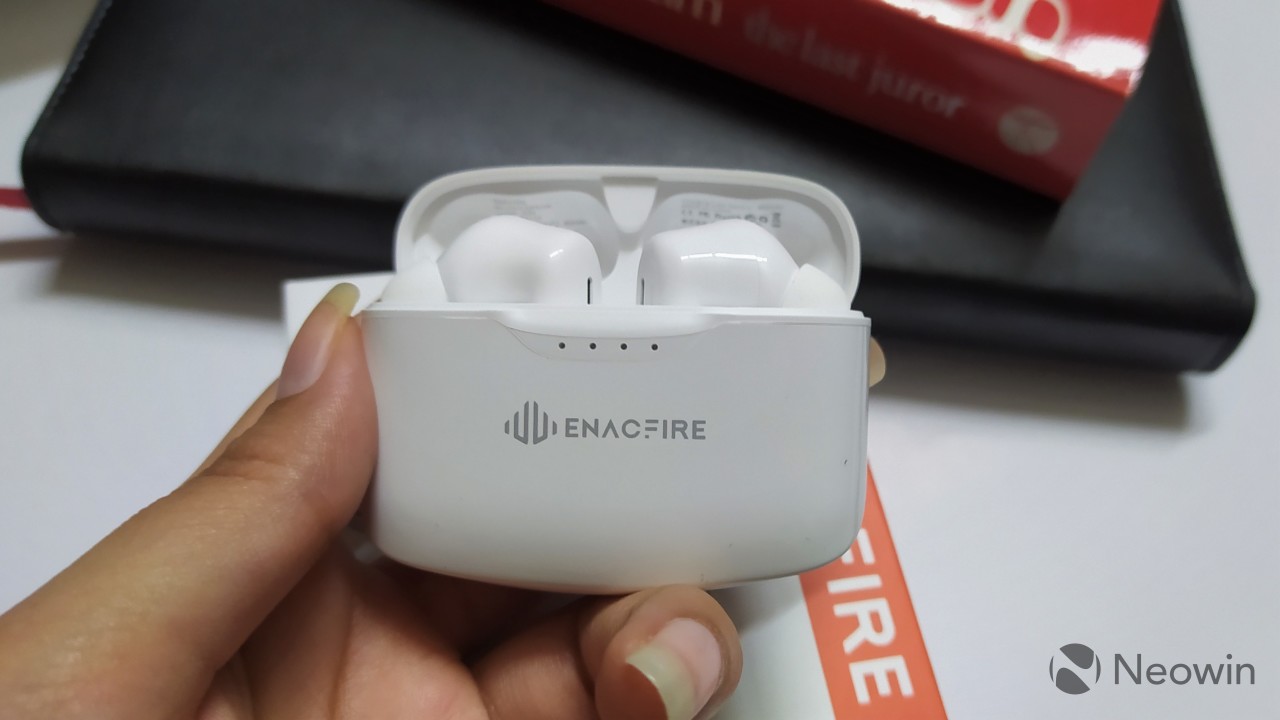 Now the website does mention that increasing or decreasing the volume will affect the battery life, so I am fully confident if I had not used them constantly like a maniac, I would easily be able to get the official 48hrs of playback Enacfire claims the E90 earbuds can deliver.

Another thing that made me happy was the charge time. The Enacfire E90 true wireless earbuds support USB Type-C fast charge but the compatible wattage has not been disclosed. According to the official specs, the E90 buds take between 1.5 to 2 hours to be charged in full. Once my earbuds were drained, I plugged them in and it took me exactly 1hr 12m.

After many days of hands-on testing and heavy usage, I have some thoughts about the Enacfire E90 TWS headphones. I decided to review the earbuds because of the growing chitter-chatter about the company. It has a pretty dedicated fan base and many claim that these are the best true wireless earbuds they have ever used.

While that last part might be a bit of an exaggeration, I truly feel that the fans or on to something. It all comes together when you factor in the price, which is $49.99 on Amazon or $59.99 on the official Enacfire online store. The features that these earbuds offer at this price point is truly impressive. 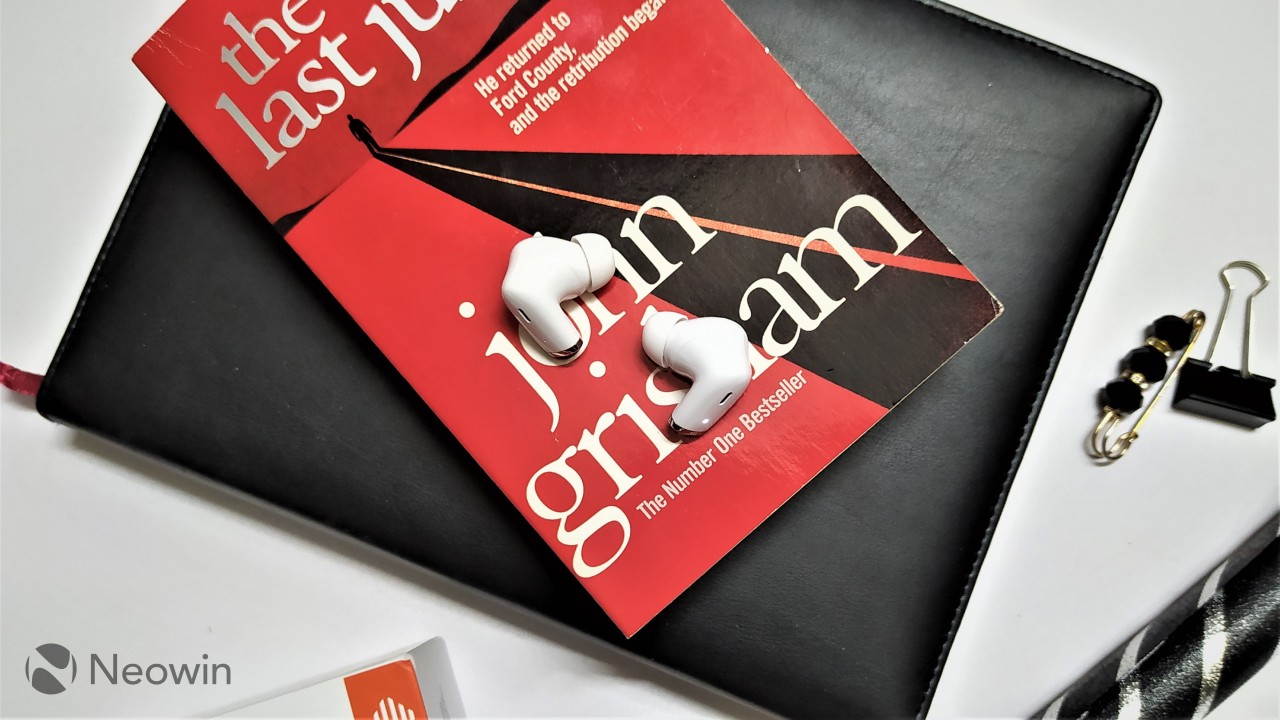 You get an outstanding battery life, excellent sound quality, fast charging and a nice, lightweight design which sits tight and doesn't budge or fall out. There's even an IPX8 water resistance rating for better durability in rainy conditions or as a safeguard against clumsy incidents.

I would, however, have really liked it if Enacfire had a companion app for the E90 earbuds which provided a dynamic equalizer. I'm a big fan of customizing and optimizing audio devices to my taste. This isn't that big of an issue because you can always use a third-party app but it would have been nice.

Another area that could use improvement is the audio quality at max volume. While the vocals don't get distorted, the bass tends to sound grainy and woolly at times. This can, however, be fixed to a certain degree by using an equalizer.

So here's my final verdict for the Enacfire E90 wireless earbuds: scout's honour, you can bet your bottom dollar on these earbuds to provide true value for your hard-earned $50. Just don't expect premium sound quality from a budget product.