Facebook Messenger could make it more difficult for prying eyes to view your private conversationson your iPhone in the future. The service is testing adding an extra layer of security to your personal conversations in the form of Face ID, Touch ID, or passcode (via Engadget).

The experimental feature is currently available to a small number of Messenger app users on iOS, though it could also make its way to the Android app in the future. The app lock feature will require you to verify your identity when you try to access your messages, assuming you've enabled the feature. That's on top of theexisting security lock for your device, meaning you'll have to re-authenticate even if your phone is already unlocked. The Messenger app's native app lock option willrely on your phone's security settings.

"We want to give people more choices and controls to protect their private messages, and recently, we began testing a feature that lets you unlock the Messenger app using your device’s settings. It’s an added layer of privacy to prevent someone else from accessing your messages.” 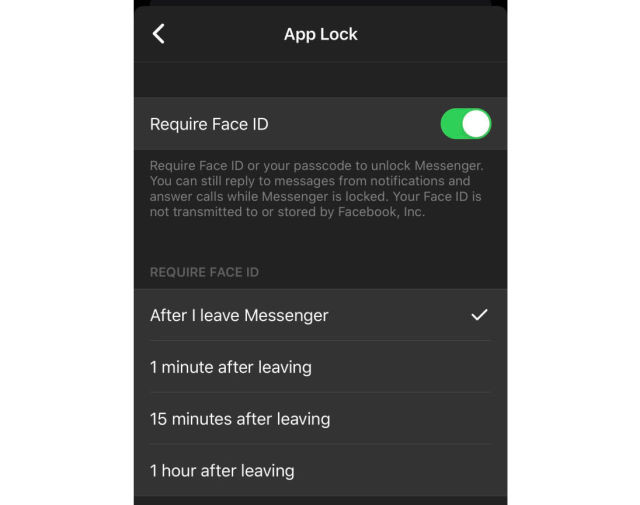 When one turns on app lock, they will have the option to set the time for the verification prompt to appear after leaving the app. Testing for this new security feature may have begun as early as January of this year when reverse engineering expert Jane Manchun Wong discovered the security measure being tested on the messaging app.

It also makes sense for Facebook to add the feature to Messenger, seeing as it already enforced Face ID and Touch ID lock on WhatsApp for iOS since February of last year (as well as fingerprint lock for WhatsApp's Android version in November 2019). Now, it remains to be seen when Messenger will roll out these security options to everyone.