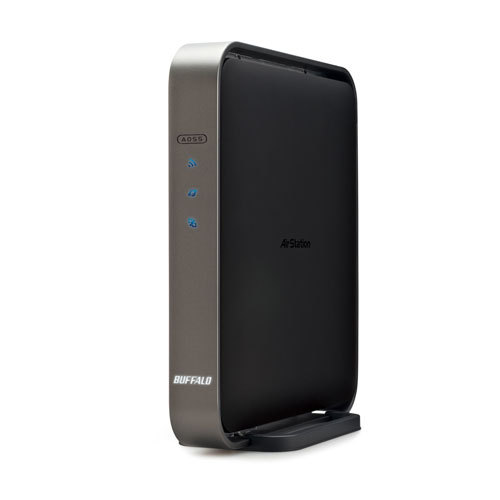 If you want to be on the cutting edge of WiFi technology, you can now do so for the price of $179.99. Buffalo Technology has announced today that its AirStation WZR-D1800H WiFi router and the WLI-H4-D1300 wireless media bridge, the first to support the new 802.11ac protocol, are now on sale in select retail outlets.

Both products support the new 802.11ac WiFi protocol, running on the 5 GHz spectrum. Technically, 802.11ac isn't quite official yet; the final standards have not yet been ratified by the IEEE. However, Buffalo claims that its new router product can, in theory anyway, offer transfer speeds up to 1300 Mbps.

Buffalo also says the media bridge device can provide data speeds of up to 1750 Mbps across the 5 GHz and 2.4 GHz bands. It also has four gigabit Ethernet ports for those of you who want to connect to some devices with a wired network connection. Both products have a 2.4 GHz 802.11n radio for data transfer speeds of up to 450 Mbps.

Of course, your PC, laptop, game consoles, smart TVs, wireless phones and more all support the older WiFi protocols. You can still use these new routers, they are fully backward compatible with any WiFi enabled device that has 802.11a, 11b, 11g and 11n support. Just don't expect to see 1300 Mbps in data transfer speeds until the new 802.11ac WiFi protocol is available on more products.