While it's great to see the continued popularity of tech events, most of which regularly sell out, some people have taken it upon themselves to offer tickets to the Google I/O developer's conference taking place between May 10 - 11 at over three times their face value!

The event will cover browser, search and Android news, and the good news is that Google will also stream the keynote addresses live both days, with session videos to go up later, so it's not like you completely miss out if you're not there. 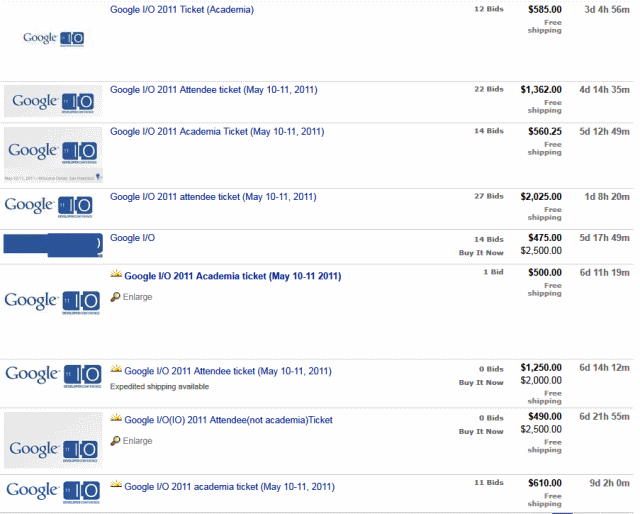 According to Android Central, originally the event took seven days to sell out, for early bird purchasers; then an extended offer of tickets took just 59 minutes to sell out.

Some of those people who got their hands on the tickets have now started listing them on eBay for anything between $200 (with a "Buy it now" price of $2,500) and in one case, $2,025 after 27 bids, at the time of writing. It would seem for some, price is no object.

The general-admission price of a ticket was $$450/550 -- with student/teacher tickets, priced at $150 -- now going for a good $400 or so over face value. Sure there will be food, partying and probably some freebies, but this is just extortionate!

eBay is notorious for crazy stuff appearing on the site for equally crazy prices, and while the company has not yet pulled the auctions let's hope that Google or eBay do the right thing here.