A ton of devices have been announced this week at Mobile World Congress in Barcelona - from the intriguing LG G5 and evolutionary Galaxy S7 and S7 edge, to the mighty HP Elite x3, and the Matebook, Huawei's new premium Windows 10 tablet. The number of companies launching Windows 10 devices has continued to grow in recent months, and Alcatel is one of the latest to join that list, having unveiled its new Plus 10 tablet at MWC.

The tablet complements the Alcatel OneTouch Fierce XL with Windows 10 Mobile, which the company first showed off at CES earlier this year, and which went on sale in the US through T-Mobile this month. Given that it already offers a handset running Windows 10 Mobile, as well as a small Windows 10 Mobile tablet, the Pixi 3, it makes sense that Alcatel would complete its line-up by offering a large tablet with Microsoft's new OS too - although its latest device runs the full 'desktop' version of Windows 10, rather than the Mobile edition.

Even so, Alcatel is focusing keenly on mobility with the Plus 10 - this isn't a device intended to be used solely at home or in the office. Alcatel is one of only a small number of companies to offer 4G LTE connectivity in a Windows 10 tablet... although strictly speaking, that cellular support isn't in the tablet itself.

Rather than integrate the cellular radios directly into the device, Alcatel has instead built that hardware into the keyboard section, into which the tablet magnetically docks. The company apparently believes that users are unlikely to carry around the tablet on its own anyway, and that it therefore makes more sense to offer 4G connectivity only when the keyboard is available.

The reasoning behind this decision becomes clearer when you consider that the keyboard comes with its own 2580mAh battery, in addition to the 5830mAh battery available in the tablet itself; given the additional battery drain caused by connecting to cellular networks, Alcatel has evidently put some thought into this, but there will no doubt be some users disappointed that it didn't build the LTE support into the tablet itself, while still allowing the keyboard to offer additional battery capacity.

Even between the tablet and keyboard, Alcatel says that you can expect around 8 hours of battery life, which the company promotes as "one working day" of usage.

The keyboard is a pretty solid piece of kit, although the plastic used in its construction doesn't exactly feel high-grade. It doesn't feel especially 'cheap', but you won't be under the illusion that it's a top-of-the-line piece of hardware. The keys are nicely spaced, making it pretty easy to type, although the short downward key travel won't be to everyone's tastes.

Sadly, there was no opportunity at MWC to test out the 4G connectivity, so this will have to wait until a 'real-world' test is possible away from the glitz and glamor of the show stand. 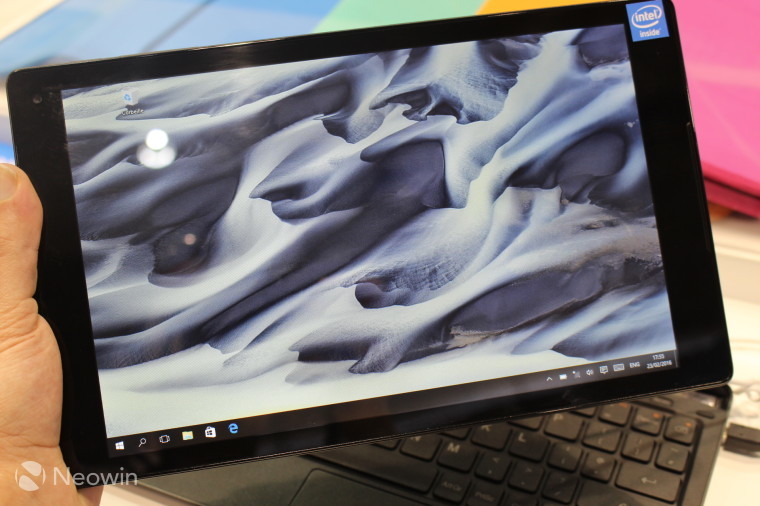 It's quite nice to hold, with a body that's just 8.3mm-thick and which weighs 465g. With the keyboard attached, the whole thing weighs a total of 850g, making this a nice, light package that you'll be able to chuck in your bag and carry around without it weighing you down too much.

I refer to the Plus 10 as 'affordable', but Alcatel hasn't yet announced pricing for the device. Even so, given that Alcatel's other devices are priced towards the more affordable end of the pricing spectrum - and since the Plus 10's specs aren't exactly flagship-class - this seems like a safe bet.

This impression is further reinforced by the display - a 10-inch IPS LCD with fairly low 1280x800px resolution. The panel is decent enough to look at, but it's nothing special. Contrasts are okay, brightness is okay, viewing angles are okay - "okay" really is the operative word here; it all gets the job done, but it's unremarkable. You don't have to look too closely at the display to spot individual pixels; you won't be fooled into thinking that you're staring at a premium Full HD screen.

I suspect that pricing will be the key factor for many potential buyers when it comes to the Plus 10. In terms of its specs, it's much like any number of lower-end tablets, with an Intel Atom (Cherry Trail) processor, 2GB of RAM and 32GB of eMMC storage. The killer feature here is, of course, the 4G LTE support, and it's nice that Alcatel has also included a chunky extra battery in the keyboard to offset the power drain of that cellular connectivity.

Given how few Windows 10 devices offer 4G support, Alcatel has a good opportunity to attract buyers who desire this feature, but who aren't prepared to pay for a premium device like Microsoft's Surface 3. Indeed, at the right price, the Alcatel Plus 10 could well be the ideal choice for some.

This article was edited after publication, to add a reference to the Alcatel OneTouch Pixi 3 tablet.