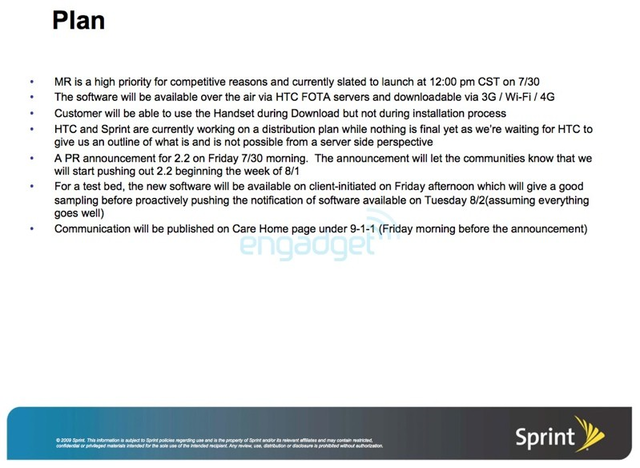 Following hot on the heels of news that the HTC Desire and other devices are receiving Froyo soon, it's been pinned by Engadget that the HTC Evo may also get the Froyo update as soon as tomorrow, though they say the date may not stick.

Engadget's gotten hold of internal slides that show the planning for the release, and there are some huge changes in addition to general Froyo goodness. The update is said to include a flashlight mode for the LED flash, new widgets, light-assisted 720p video and improvements to the quality of video capture. Apparently, Sprint is due to make a press release today, and users might be seeing Froyo hit their Evos as soon as August 1.

The update will be welcomed by HTC Evo owners with open arms, and will be done OTA (Over the Air) but may only hit a small, select group of users at first, just to make sure everything goes as planned. Froyo also brings a host of new features, including a 400% speed increase, Flash 10.1 integration as well as wifi and hotspot tethering, an improved javascript engine, the ability to install applications to SD.

Do you own a HTC Evo? Did you get the OTA update? Thoughts? Screenshots? Let us know in the comments!

Update: Sprint has now announced the availability of the HTC Evo OTA update, on August 3 and even offers a way for users to "opt-in" to the update. Just go to the Settings Menu > System Updates > HTC Software Update and click "Check now" anytime after the 3rd of August and you'll be able to get that Froyo goodness.