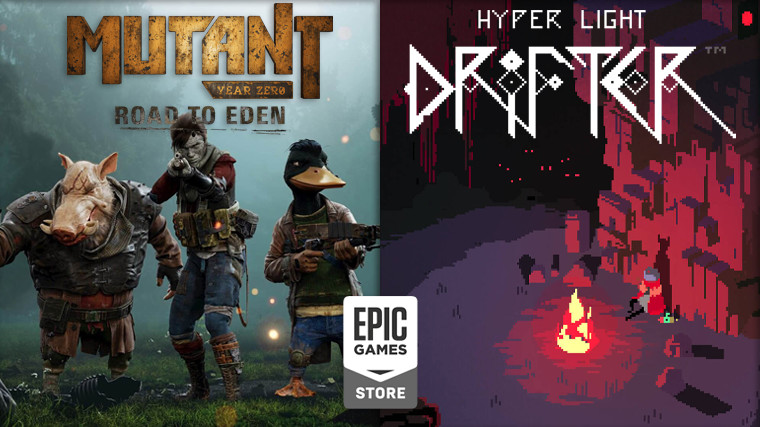 This week, Epic is putting on offer Hyper Light Drifter and Mutant Year Zero: Road to Eden to claim for free, taking the place of GNOG.

Mutant Year Zero: Road to Eden is a tactical adventure title featuring XCOM-inspired turn-based combat mechanics combined with real-time exploration. It is based on the Swedish tabletop RPG 'Mutant Year Zero'; developed by The Unbearded Ladies, a Swedish indie studio, it was originally released just last year. Here's how the Epic Games Store describes the title:

Mankind has been eradicated by climate change, nuclear war, and pandemics. Will your team of mutants survive the Zone? Mutant Year Zero: Road to Eden is a tactical adventure game combining turn-based combat with real-time exploration, story, stealth, and strategy.

Hyper Light Drifter is a 2D action RPG featuring an art style inspired by 16-bit titles of the 90s. It was originally released in 2016 following a successful Kickstarter that garnered over $600,000. It received praise for its visual and sound design as well as game mechanics. Here's how the Epic Games Store describes the title:

Echoes of a dark and violent past resonate throughout a savage land, steeped in treasure and blood. Hyper Light Drifter is an action adventure RPG in the vein of the best 16­bit classics, with modernized mechanics and designs on a much grander scale.

Epic Games Store is offering both titles at no cost for players on Windows. It's worth noting, however, that Hyper Light Drifter is also available for macOS and Linux via Steam, where it is priced $19.99 at the time of writing. Also, for those who subscribe to the Xbox Game Pass on PC, Mutant Year Zero: Road to Eden is part of that subscription. Origin Access subscribers get both games as part of their subscription, as well. Here are the minimum requirements for the games:

If you wish to claim Hyper Light Drifter or Mutant Year Zero: Road to Eden, you can find them here. They will be free to claim until August 22, which is when Epic will put on offer Fez for its next giveaway.