If you haven't got a spare $13,999 lying around to buy InFocus' new 70-inch rival to the Microsoft Surface Hub, you may be interested in a much affordable device unveiled by the company today.

The Kangaroo Notebook is a rather unconventional device, offering a semi-modular approach to portable computing. It may look like a regular notebook, but it's actually a 'laptop dock' that comes with two identical mini-PCs that each slot into the dock, and can be swapped as needed. 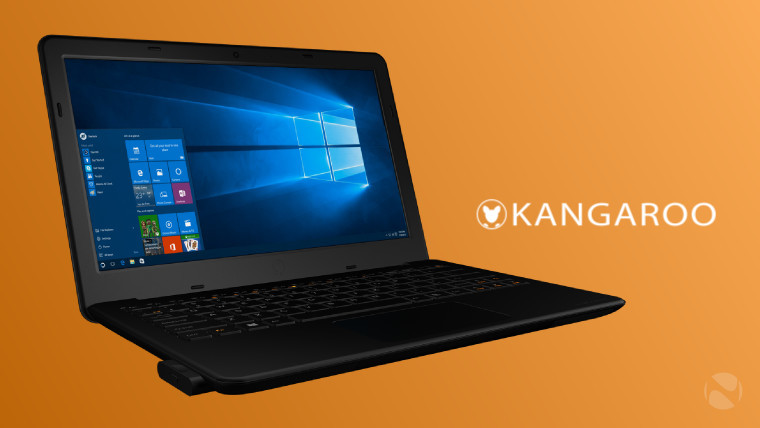 The device was conceived as an option for budget-conscious buyers who value the idea of having separate devices for work and play, or perhaps for different members of the family. Rather than keeping everything stored on a single PC with individual logins, the Kangaroo Notebook allows users to keep their activities entirely separate by effectively offering two PCs in one.

Each of the mini-PC modules has its own processor, RAM and storage, and slots into the notebook dock as required. InFocus explains:

The Kangaroo Notebook gives users the flexibility to decide and create their own personalized mobile computer through the inclusion of the two Windows 10 CPUs, without the common disadvantages of sharing storage space and performance caused by having multiple user accounts on one PC.

The main notebook dock's specs include:

The interchangeable modules are designed specifically for the Kangaroo Notebook, so you won't be able to connect them to other displays, like most 'dongle'-style mini-PCs. The two modules feature identical specs, including:

Those specs aren't exactly going to set the world alight with fierce performance, but for the price, you probably wouldn't expect them to. And price is a very big factor in the Kangaroo Notebook's appeal - the device will be available to buy in mid-October, exclusively from newegg.com, for $299.99, which includes not just the notebook shell, but also the two mini-PC modules.

Clearly, the Kangaroo Notebook won't appeal to everyone - but it's always interesting to see companies try new ways to meet the needs of their users.