Lately, Microsoft has been busy promoting its Edge browser by boasting battery life improvements, JavaScript enhancements, extensions, and upcoming features. Now, the company has once again taken a shot at the competition in new video tests, through which it claims that Edge is the most power-efficient browser for users.

In its latest tests, Microsoft claims that with the Anniversary Update, Edge is "still the best choice" for saving battery on Windows 10 as it is considerably more efficient than the competition during browsing as well as streaming. The company also reports that the latest improvements to Edge have resulted in a 12% better rendering efficiency as compared to Windows 10 version 1511.

Microsoft also stated that it was "thrilled"" to see how the competition - namely Chrome and Opera - had responded to the company's first round of video tests. With that being said, the Redmond-based company has once again conducted lab tests pitting Edge against Google Chrome, Mozilla Firefox 47, and Opera (with Battery Saver on) on identical devices running the Windows 10 Anniversary Update. The results were as follows: 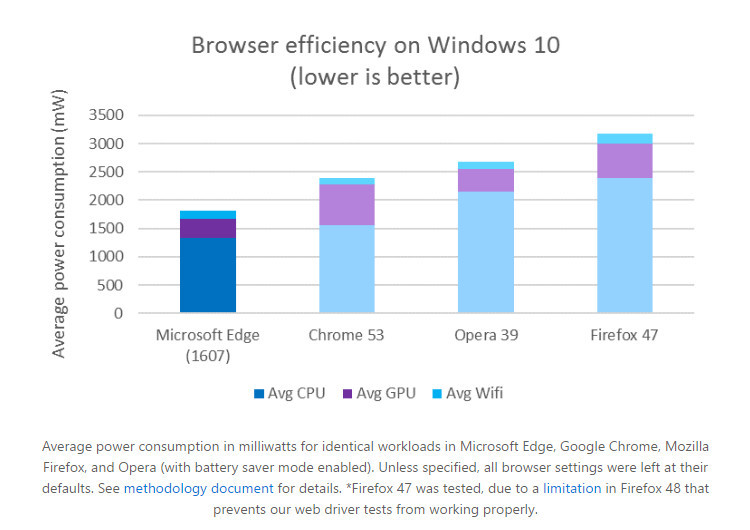 As can be seen, the results were in Microsoft's favor, with Edge offering 24%-43% more efficiency in daily activities including video playback, multi-tab productivity, shopping and social media.

Microsoft also boasted of Edge's battery efficiency during video streaming stating that its browser lasts 23%-69% longer than other browsers during Netflix streaming. The browser managed to surpass Chrome by more than 90 minutes in the Netflix streaming test. The company went on to say that it also looped the same video from Vimeo that Google had used to demonstrate Chrome's power-saving capability earlier this month. In this test, Edge beat Chrome - by an hour - once again, and also lasted 62% longer than Firefox.

With that being said, Microsoft emphasized that real-world tests are what really matter. And to see how Edge performed in the aforementioned scenario, the company collected aggregated telemetry data from million of Windows 10 devices around the globe to demonstrate Edge's low power-consumption capabilities: 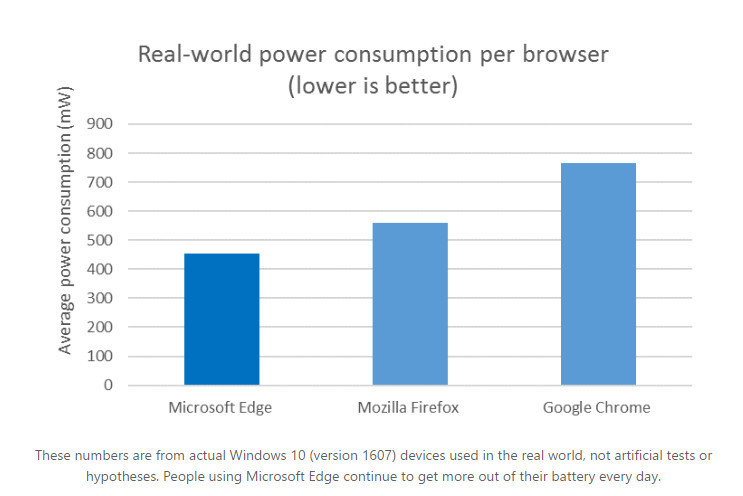 In an effort to back up its results, Microsoft has said that it is open-sourcing its lab tests on GitHub and publishing the methodology used, so people can independently verify the results if needed. The company states that Edge's power-saving capabilities will continue to play a key role in future releases, as Microsoft optimizes the browser by using fewer CPU cycles and minimizing the impact of background activity.