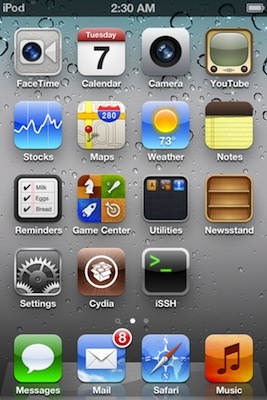 Less than 24 hours after Apple announced iOS 5 at WWDC, jailbreakers have successfully managed to get free access to the operating system. At this time however, iOS 5 is in a limited beta and won't be available to the general public until the autumn.

Tweeter @musclenerd broke the news today, noting that iOS 5 presented "not too many surprises." Currently, MuscleNerd is using the limera1n tethered exploit, which means that it may be a while until we see an untethered solution. Either way, the news is surprising considering the major changes Apple had apparently made in this release.

The jailbreak community has brought a wide range of features to iOS devices long before Apple has come up with a solution. Examples include video recording, homescreen backgrounds and apps. iOS 5 is no exception. An alternative to Apple's notification system has been around for a while, and MobileNotifier apparently impressed Apple enough to hire its developer. Peter Hajas' work is evident in the new iOS 5 notification system.