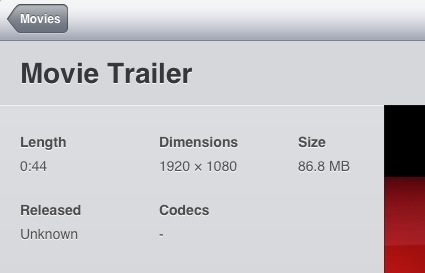 iOS devices like the iPhone and iPad had been limited in the past with 1080p HD video playback through their respective native video viewing applications being an unsupported format. In iOS 5, Apple has changed all that and added 1080p video format support, which now syncs to the iPad 2 and is playable in the full 1080p format, as pointed out by twitter user jamie367p. Prior to iOS 5, iTunes would not even sync video of 1080p quality.

According to first hand accounts by the people over at 9to5Mac, playback is very smooth and looks great; this feature will become available when Apple officially delivers iOS 5 to customers sometime this fall.

You may be wondering the importance of 1080p quality on such small scale devices, consider iOS 5′s AirPlay video mirroring feature. Although this is said to be an iPad 2 only option, this would create an HD capable wireless media center out of nearly all the iOS devices if the feature becomes widely adopted.