According to a report by TechDay, the iPhone 4 may not be available in New Zealand after Vodafone pulled all information from their website this morning, and the devices are not available in stores as of yet, even though the launch was announced for this Friday.

The Herald is reporting that the Vodafone - Apple deal may be off, and the iPhone will not be available in New Zealand except through the official Apple store. Apparently "Vodafone, JB Hi-Fi and Magnum Mac have all told nzherald.co.nz that the device won't be for sale today, the promised launch date."

Another large retailer in Wellington, Magnum Mac, who was pinned to have stock of the iPhone 4 had a sign in it's window reading that "no iPhone 4's were being sold [there] today, due to a lack of supplies in NZ." 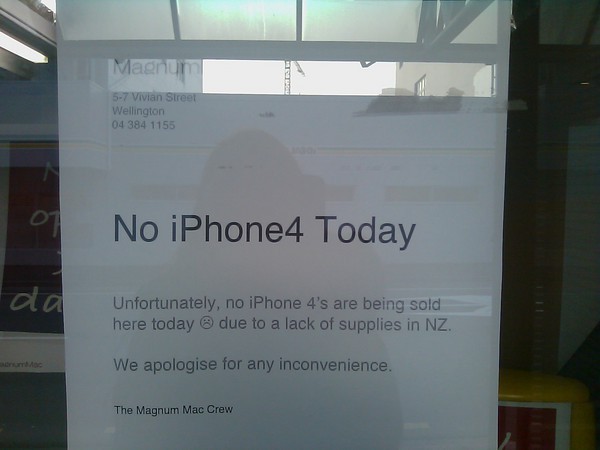 Vodafone responded to calls from TechDay only saying "No comment. You have to speak to Apple." As of writing, Vodafone has replaced the information on the iPhone 4 on their website, but clicking through only displays information on the older iPhone 3GS.

Last night, Australians recieved the launch of the iPhone 4 with open arms at midnight, with each telco receiving a shipment of around 13,000 devices. In New Zealand, Apple had previously told retailers they were not allowed to reveal if they were stocking the device or not until Friday morning, and were not allowed to advertise a price. A commenter on The Herald's website said that they had "Heard a rumour that the shipment from China has been delayed hence no stock for stores, They are desperately trying to get stock from Aussie but won't be here in time."

Apple also said that "We are thrilled to be selling iPhone 4 in our Apple Online Store starting this evening. For further availability details please contact Vodafone" even though Vodafone refuses to comment.

Update: Though Vodafone itself has nothing to say, Vodafone outlets have now spoken up and said that: "We are getting them in at midday. I can’t say how many, but not a lot."

Update 2: Vodafone has now said that phones will be available through "select retailers" at 12pm, and that there is a very limited supply.