On Sunday, Vietnam-based developer Dong Nguyen, the creator of the popular game Flappy Bird, removed it from both the iOS App Store and Google Play. Now someone is using the fact that the game won't be available for download again as a way to make some quick cash. 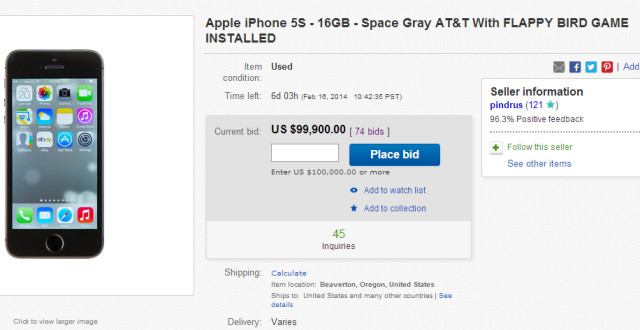 An eBay listing for an used 16GB iPhone 5S was posted soon after Nguyen removed Flappy Bird from circulation, even though the game had generated 50 million downloads and was making $50,000 a day in revenue via in-app ads. The Oregon-based eBay seller of the iPhone 5S claims to have Flappy Bird pre-installed on this used device.

The shocking thing is that people are not only bidding on the phone, but are apparently willing to spend lots of money to get a product with Flappy Bird. The seller had set a minimal bid of $650 for the phone and so far there have been 22 bidders. The highest bid, as of this writing, is for a unbelievable $99,900.

The seller offers no real proof that Flappy Bird is in fact installed on this iPhone. On the other hand, we also think it's highly unlikely that anyone will actually pay $99,900 for this eBay listing. The bidding is scheduled to end in six days.

More eBay listings for iPhone 5S models with Flappy Bird have also popped up, including one that has a high bid of $90,200. The game is also being sold pre-loaded on older models, like the iPhone 4 and even the iPhone 3GS. Other listings are selling the game itself, on iOS and Android, via sideloading or other methods. As always with any of these types of listings, many of them are bound to be fake so be extremely cautious before spending any money on these items.