A new mystery device has been dredged up from Antutu’s database. Called the “Gamebox” and manufactured by Asus, this looks to be a new handheld console, similar to Nvidia’s Shield.

For those not familiar with it, AnTuTu is a benchmarking app, which many reviewers use to test new devices. You might have seen it pop-up in our reviews for Android products. The app also stores info about the devices it tests in an online database, and this where the Asus Gamebox was found. 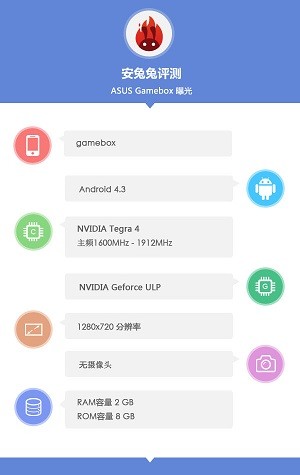 The Gamebox seems to run on Android 4.3 and be powered by an Nvidia Tegra 4 CPU, clocked at 1.9 Ghz. The device also features 2GB of RAM and 8GB of internal storage, while its screen has a 720p resolution.

If that sounds a bit familiar, it’s because those stats are almost identical to Nvidia’s Project Shield, the handheld Android-powered console. The two devices are pretty much identical in terms of performance. And while Shield hasn’t exactly taken the market by storm it’s regarded by many as a strong start for Nvidia’s future mobile strategy.

Could this be Asus trying out a whole new product line or just run of the mill R&D inside a major company? It’s hard to tell with this limited info but you can be sure that if this product heads to market we’ll cover it.