Microsoft has shown it is no stranger to adding new features to Bing, such as a new way to like and comment on Facebook directly from Bing search pages. Now a new report claims that the company could be adding a new live chat feature for Bing users. 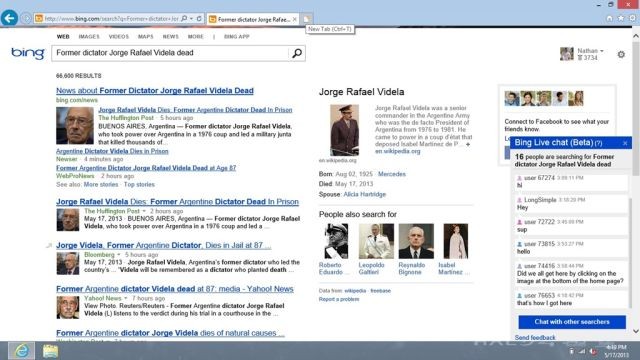 LiveSide reports that some users of Bing have spotted a way to bring up a chat system inside Bing.com search results, so it looks like Microsoft is testing this system out in the wild among a few users. The chat system apparently doesn't make users sign up to a Microsoft Account or Skype accounts but is rather an anonymous chat client that lets people discuss search terms that two or more people are accessing at the same time.

This sounds like a way for Microsoft to give Bing users a way to chat about popular or trending search terms quickly, without having to open up another chat client. However, we do have some concerns that this kind of anonymous chat could lead to some content generation that perhaps might not be appropriate.

The Bing chat client is still in beta, according to the screenshots, and it's possible Microsoft will add more security features to this new way of communicating on Bing before it's officially launched.