We’ve already heard that Nokia and Samsung had disappointing fourth quarters, and Apple’s iPhone has been slowly losing market share throughout 2013. So many may be wondering if anyone’s actually winning the smartphone wars since everyone seems to be losing.

Now the latest report from Kantar Worldpanel gives us a clearer picture who is gaining market share and which markets are the most volatile. Kantar’s data is based on the previous three months, ending in December 2013.

First up, checking the tables below, we can easily see that Android has had another phenomenal year, with increased marketshare around the world. In the U.S., Google’s OS managed to increase its presence and is now sitting just shy of 51%. China and Europe have also seen greater adoption of the OS, which is sitting comfortably at 78% and 68%, respectively. However the biggest change occurred in Latin America, where Android saw a 21 percent increase year over year, and it now pretty much owns the market with an 83% adoption rate. 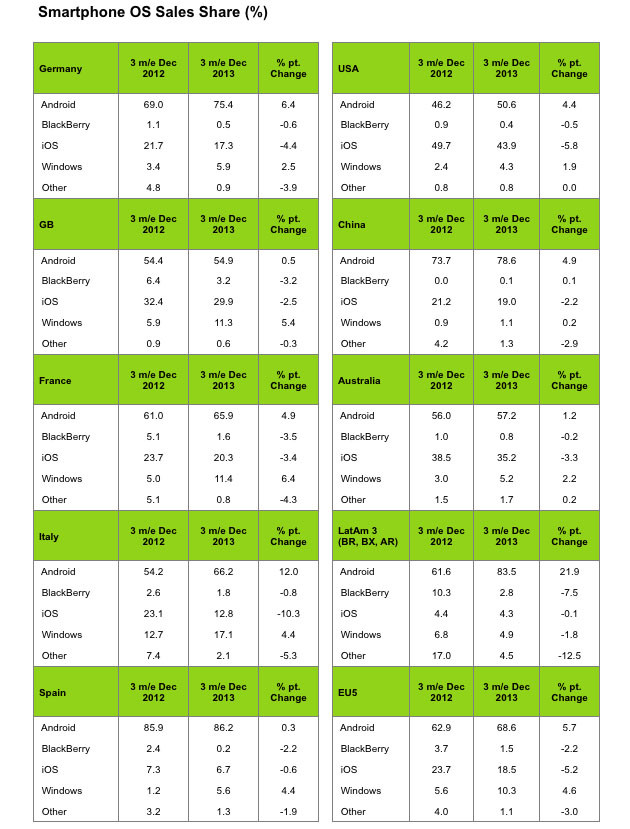 Despite all this, Samsung has had disappointing results lately, mainly due to increased pressure from local manufacturers in China, and more competition in the low-end market from players such as Nokia.

Speaking of Nokia, which practically owns the Windows Phone market, it too has had a good year in terms of adoption. Windows Phone has seen growth almost across the board. The biggest change is in Europe, where Microsoft’s platform has held double digit figures for the last three months of 2013. That’s almost double compared to last year’s results, when Windows Phone only accounted for 5.6% market share. Other markets have also seen growth, but Windows Phone is still very anaemic when it comes to the U.S. and China.

Finally, the year’s biggest market share losers are Blackberry, which is clinically dead, and more surprisingly Apple. The Cupertino company has seen decreases in pretty much every market. Even in the U.S., where it holds the most sway, iOS has seen a 5.8% decrease with most of those users moving to Android. Another big drop was seen in Europe where Apple’s products lost another 5.2% compared to 2012 and are now sitting at 18.5% marketshare.

Already we know Samsung is going on the offensive with the new Galaxy S5 being supposedly launched in the next couple of months, and there are a ton of rumors as to Apple’s upcoming plans. And let’s not forget Microsoft, which now owns Nokia’s smartphone business. All in all, 2014 is shaping up to be a very interesting year in terms of the smartphone race.