Lenovo has been quite busy over the last several weeks, as it started selling a number of long awaited Windows 8 products such as the ThinkPad Helix hybrid and the large 27 inch IdeaCentre Horizon all-in-one PC. Today, the company has decided to tease two upcoming but more conventional looking notebooks that still have a pretty smooth design frame. 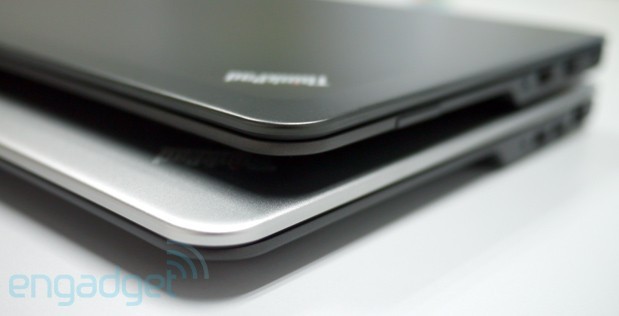 Engadget reports that the two laptops are the 13-inch ThinkPad S3 and the 15-inch ThinkPad S5. Both of these notebooks are made of aluminum and can come with either a black or silver lid. The only other detail revealed so far about these products is that the shape of the front outer edge along the bottom has been shaved in order to give the notebooks a "floating design."

There's no other word on what the hardware specs will be like for the ThinkPad S3 and ThinkPad S5, including if the notebooks will have some kind of touchscreen display. The story does state that that the notebooks could go on sale in China at the end of the month but that's just speculation at this point. However, the teaser images show a pretty sleek laptop case and hopefully the insides of these new ThinkPads will be just as impressive.