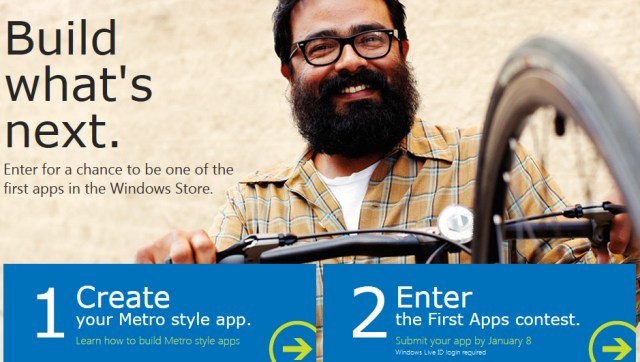 Among all the announcements yesterday around the details for the new Windows Store, the company also launched a competition at their buildwindowscontest website where you can be among the first to be listed on the Windows Store, and get the Windows 8 beta before anyone else.

Microsoft is really looking to boost the Windows Store right from the get-go, with it becoming publicly available right from the public beta rather than at the consumer release of Windows 8.

The First Apps contest will select eight winning apps to be the very first apps in the Windows Store when it opens. This is your chance to show off your great app and to be part of an exclusive group of developers invited to participate in the Store when it first opens. The winning developers will also get some goodies to help them build even better apps:

But there's no time to lose, as the site points out: Submissions are due by Sunday, January 8 at 11:59pm PST. This gives you just over 30 days to design and develop your app. Finalists will be notified on Sunday, January 15. Finalists must update their app to run on a new, confidential Windows 8 build provided by Microsoft and resubmit their app before February 3 to be eligible to win.

A Windows Live ID is required to enter the competition, and you can do that here.

Update: It's also important to note (as Long Zheng did at istartedsomething) that this competition is only open to selected countries, them being: A legal resident of the 50 United States and District of Columbia, France, Germany, Japan, or India.

For more details on the Windows Store and a video walk-through, click here.
Thanks again to FaiKee, for the tip in our forums.