Microsoft launched Internet Explorer 10 along with Windows 8 and Windows RT in late October, and launched a "preview version" of its latest web browser for Windows 7 users in mid-November. So far, IE10 is currently only being used by a tiny fraction of PC owners. 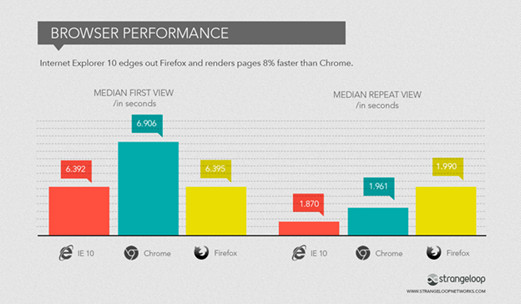 That isn't stopping Microsoft from making the case to businesses they need to upgrade to IE10, while also trying to show that they don't need to use any other competing web browser, such as Google's Chrome and Mozilla's Firefox. In a recent post on the Exploring IE blog, Microsoft reveals data for Forrester Research that claims businesses lose money if they use more than one web browser at work.

Forrester found that firms spend an extra $4,200 per web app annually to support multiple browsers. For a large corporation, that translates to almost $400,000 per year just for web apps. Any potential benefits were clearly outweighed by support, maintenance, and other costs - as most firms with multiple browsers experienced cost increases in excess of 20% overall.

So why should corporations pick IE10 over other web browsers? Microsoft claims IE10 has a number of advantages, including better security, support for modern web language standards and many more. Microsoft also says that IE10 is faster than other web browsers, which was reported a month ago in a separate study by New Relic.