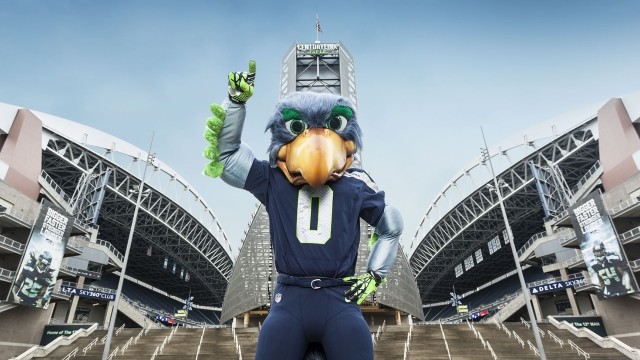 Microsoft has tens of thousands of employees, many of whom probably lead interesting lives. But how many of them can say they're the mascot of a well-known professional sports team?

In its most recent employee profile, Microsoft spotlights Ryan Asdourian, a communications manager at Microsoft who is also Blitz, mascot for the NFL's Seattle Seahawks. On several Sundays throughout the year, as well as a few other days, Asdourian entertains a stadium of nearly 70,000 people. The role isn't entirely new to the Microsoft employee, however, as he previously served as the University of Florida's manager, Albert the Alligator.

At his normal job, Asdourian works with the Windows team to get apps on the platform and provide high-profile demonstrations at major events, according to the profile. He's given presentations alongside the likes of Microsoft CEO Steve Ballmer, though he typically travels across the globe to present demonstrations of all the company's products.

The profile notes Asdourian was diagnosed with Multiple Sclerosis five years ago and has used his role as Blitz to raise awareness for the disease. Last year, for instance, he led a team that raised $80,000 for the MS Walk in Seattle, and he's hoping to get all 26 of the NFL's mascots to attend the walk this year.

In addition to Asdourian, Microsoft has several close ties to the Seahawks. Microsoft co-founder Paul Allen is the owner of the Seahawks (the profile notes Asdourian coincidentally ran into Allen and Ballmer on the sideline of a game a few years ago), and the company's Bing unit has been a major sponsor of the team since 2009. On Twitter, Bing routinely cheers the team on with the hashtag #BingHawks.