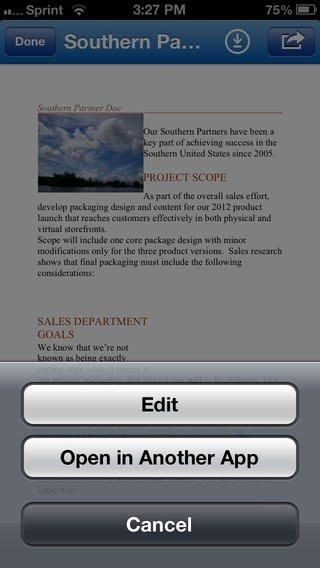 In a post on the Office blog, Microsoft says the new "Edit" feature will show up on the iPhone version by opening up a document in View mode and then clicking on the "More options" button. The iPad version uses the same process to go into "Edit" mode, except that the document then opens in the corresponding Office Web App via iOS's Safari browser.

In addition, the SkyDrive Pro 1.1 version allows users to view and edit OneNote notebooks stored in a SkyDrive Pro account. Microsoft says, "Your notes appear the same-even rendering ink-across all your devices (Windows, Windows Phone, Android, iOS). The OneNote file remains connected to your SkyDrive Pro in Office 365, allowing you to keep track of your work notes, all in place, even on the go."

Just a reminder: The SkyDrive Pro iOS app is meant for use by Office 365 business users, and cannot be used by owners of Office 365 Home Premium.