Microsoft has announced the upcoming launch of a "curated marketplace" for Minecraft, its blocky world-building game. The new Minecraft Marketplace will be the first official store for third-party content, and will offer add-ons - including maps, and skin and texture packs - from a range of "professional 'content creators' selected by Microsoft", the company said today.

The new store for "community-made goodies" will launch with content from nine companies, but "anyone with a registered business" can submit their content for consideration. The nine launch partners are:

Eneija – Designs pastel skin packs. “I think they will be very popular with segments of our audience,” Thornton said

Imagiverse – Made a pirate-themed map called “Privateer”, complete with sunken ships and treasure

Polymaps – Built Jurassic-themed texture packs, with dinosaurs and Dodos instead of chickens and cavemen instead of villagers

QwertyuiopThePie – Made a multiplayer map featuring two spaceships, which teams can inhabit before battling each other

We selected nine creators to launch with," John Thornton, Executive Producer of Minecraft Realms, said today. "This is a curated marketplace, it’s not open, but we are going to work with creators to bring new ones in via an online portal, where they can apply to join. We think it’s important from a quality perspective to have a curated marketplace where we are reviewing the items and working with creators to make sure the content is appropriate and exciting for players." 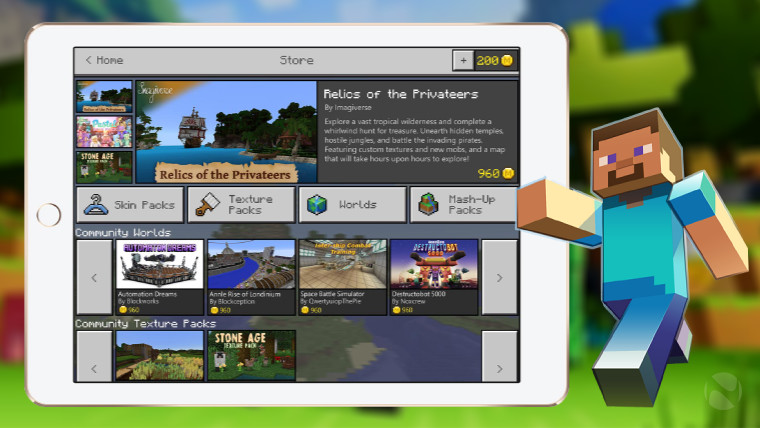 Those who wish to make purchases from the new Marketplace will have to do so using a new digital currency called Minecraft Coins:

We’re introducing Minecraft Coins which you can buy using in-app purchases on your device. Coins let creators set flexible prices and take their share of what they sell. It's super important to us that this is the biggest chunk of the profit: when a cool skin or map gets purchased, the app store platforms take a 30% cut, but creators get the majority after that.

Microsoft explained that it "believes the move will make it safer and easier for Minecraft players to enhance and expand their worlds, as transactions take place within the game and downloadable content can be screened to ensure it doesn’t contain viruses or malware." Players will also need an Xbox Live account to make purchases; Microsoft said that "you'll be able [to] access whatever you buy across devices" through Xbox Live, adding that it's "currently talking with our platform partners about how to make this happen".

The new Minecraft Marketplace won't be available on all devices, though. It will come to Minecraft: Windows 10 Edition and Minecraft: Pocket Edition this spring, as part of the 1.1 Discovery Update that it announced last month.

A public beta will launch on Android "in mid-April" - but Microsoft said that "this will focus on testing the new Minecraft Coins, so you won't see any creator content" in that initial preview.