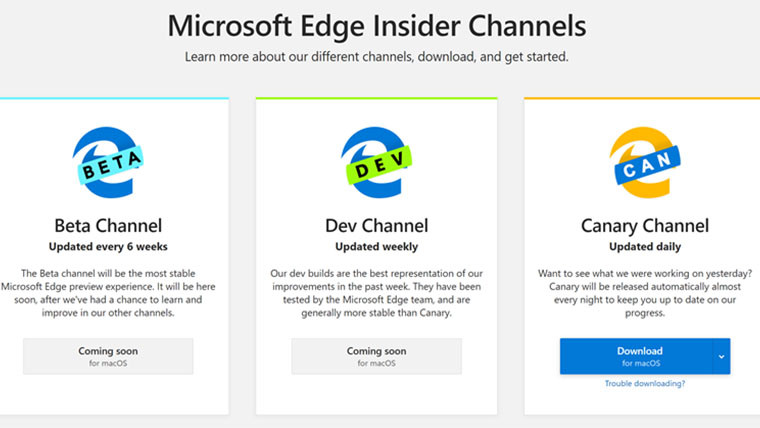 First announced in December and shown off at Microsoft's Build 2019 developer conference a couple of weeks ago, its Chromium-powered Edge browser for macOS is now available to download. At this time, it's only available from the Canary branch, which gets daily updates.

In terms of differences from the browser on Windows 10, they're subtle. Microsoft said it made some tweaks with different fonts, menus, keyboard shortcuts, title casing, and "other areas", which are meant to match the style of macOS. The firm also said that it's adding some features that are exclusive to the OS, such as Touch Bar support. The options on the Touch Bar will include things like website shortcuts, tab switching, and media controls.

Naturally, there are some features that are not coming to macOS, such as IE Mode. Microsoft also noted that PlayReady content decryption is only supported on Windows 10, which means no 4K Netflix streaming on macOS.

Other than that, the features between Windows and macOS should be exactly the same. They're both built from the open-source Chromium browser, so content will be rendered in the same way. Once all of this is generally available, the only version of Edge that won't be based on Chromium is Edge for iOS, and that's only because WebKit is a requirement for Apple's mobile platform.

If you want to download Edge for macOS, you can find it here. It's still not officially supported for Windows 7 or 8.1, and that should be coming soon. Microsoft is still working on the telemetry for those browsers.