Flurry Analytics announced Wednesday that revenue from games on mobile phones, such as iOS and Android devices, has surpassed the combined revenue of more traditional portable consoles like the Nintendo DS and Sony PlayStation Portable for the first time. Since 2009, mobile phone game revenue has tripled from approximately 20% market share to a projection of almost 60% in 2011, mainly at the expense of Nintendo. 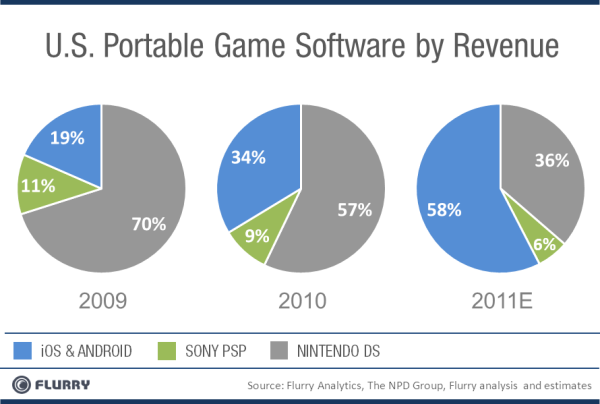 According to Flurry Analytics, the main contributor to this huge growth is the freemium business model that's become the forerunning method for driving revenue in mobile phone games. Consumers are obviously responding positively to free or $0.99 games that include microtransactions for unlocking more game content, opposed to the old traditional price model of $30-$40 games on the Nintendo DS and Sony PlayStation and their subsequent iterations. The cool consumer acceptance of Nintendo's struggling 3DS is surely not helping matters for traditional portable consoles.

Flurry notes that while the rise of mobile phones in the portable gaming space is of grave concern for Nintendo and Sony, of equal concern to these companies is that Apple and Google are both entering the TV battlefield as well - a market currently dominated by home consoles backed by Nintendo, Sony and Microsoft. It might be hard right now to imagine a future where Apple and Google platforms have gained a strong footing in living rooms, but as the data from portable gaming has shown, the future can change very quickly.