The Left 4 Dead 2 demo has been available for a day or two now, if you pre-ordered the game, and I've managed to get my hands on it too. The sequel to the popular Left 4 Dead is due on 18 November 2009, which is only a matter of weeks away now. 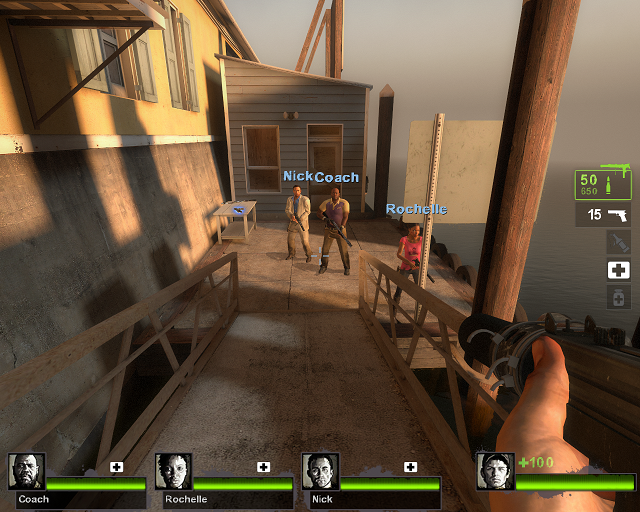 Players are given some of the new weapons at the start of the level - others they must find.

I've played through the demo several times now, on different difficulties, and there are several new features that have been improved since the original. The first thing is the weapons. Whilst players were previously restricted to five primary weapons and a pistol or two, Left 4 Dead 2 improves on that by adding several others, such as combat shotguns, Magnums and the much needed melee weapons, something the original didn't offer. 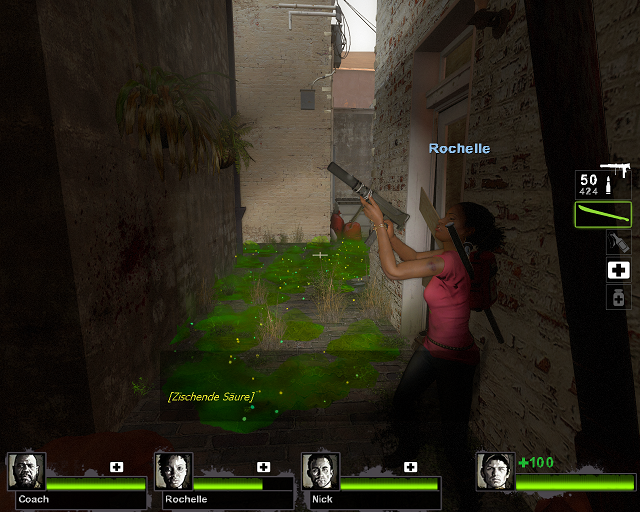 The new slime-spewing enemy - the Spitter - makes whatever it hits toxic for several seconds.

The melee weapons are possibly the biggest improvement from the game, allowing the player to club, chop and smack their way through levels when they are out of ammo. My favourite of them all was the machete, which allows you to slice your way through crowds of zombies like they are made of warm butter. 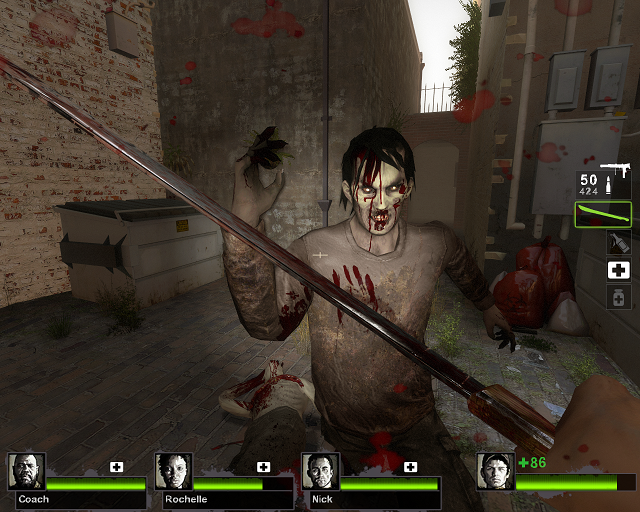 The machete, one of the new melee weapons, will reduce even the largest crowds into a pile of limbs. 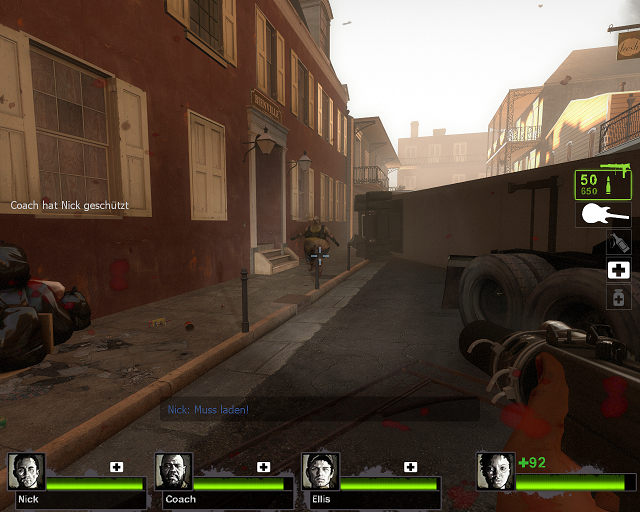 The female boomer in her nightwear.

The new enemies in the game (the Charger, the Spitter and the Jockey) complement the previous ones, and add a bit more variety to the game. And on the topic of variety, there are many more types of zombie in the game, some of which have special properties. For instance, a "zombified" security guard will take several headshots and still survive, because of the helmet he has on. 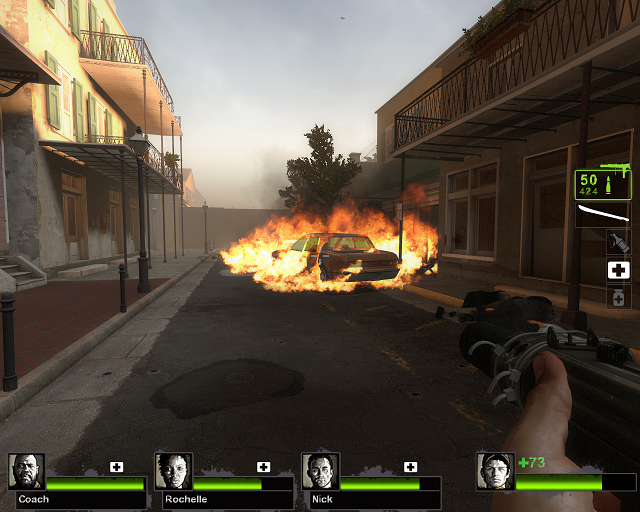 The graphics in the game has been improved in several areas, and although it's hard to tell from a screenshot, fire is one of them 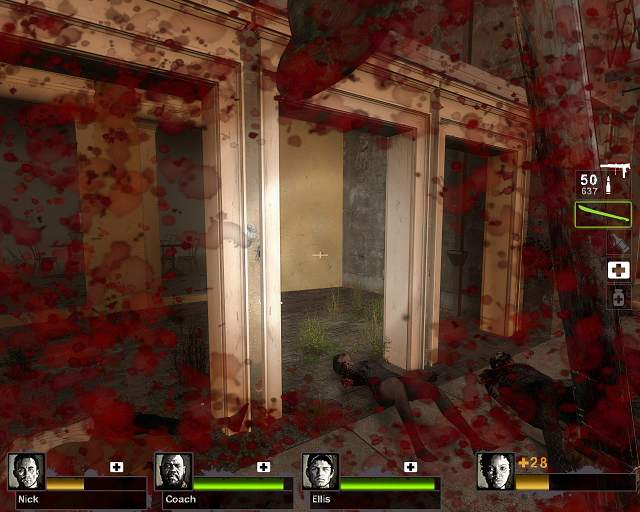 Although I've been fairly positive about the game so far, I can't help but feel at times that this is just Left 4 Dead with some new weapons, enemies and sunshine added in the levels. And although I don't think Valve has done an EA Games on us, because there are some genuine improvements, such as improved graphics, and new game modes, asking Â£29.99 for it still seems a bit much. 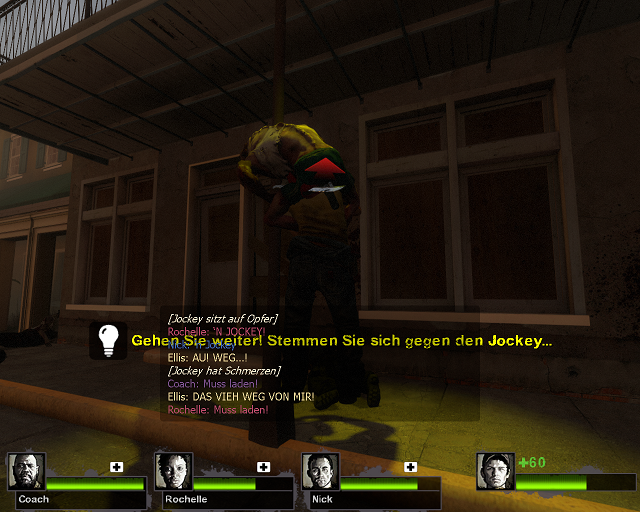 The Jockey doesn't do much damage on it's own, but will steer the player into something that will, such as a group of zombies.

The AI Director is supposed to be improved, by making dynamic changes to the game difficulty, map and weather as the level progresses. In reality, in the two maps I played several times, the largest change I noticed was that one of the paths you can normally take was blocked off on that occasion, and I had to walk a little further up the street to find an alternate route. But even watching the weather change from sunshine to showers won't exactly have me jumping in the air either, when I find a level that actually demonstrates the weather changing capabilities of the AI Director.

I've only played the demo, which I know isn't representative of the entire game. But unless Valve is saving all its tricks for an unseen level, I don't see the rest of the game being vastly different. That doesn't make it a bad game necessarily – Left 4 Dead 2 takes a great co-operative game and improves it. I'm certain it will be as fun as the last one, if not more. But I still can't help feeling that Valve were being a little cheeky trying to sell off what some have called an elaborate mod (which I wouldn't quiet agree with, but I can see where they are coming from), as a sequel.

Don't get me wrong, I have spent my own money on this game – I want it to be a success. However, purely from what I've seen from the demo, it doesn't seem to me that the game really offers huge improvements over Left 4 Dead that some would have you believe.

Thanks to our news reporter, Owenw, who was able to record this gameplay for us: