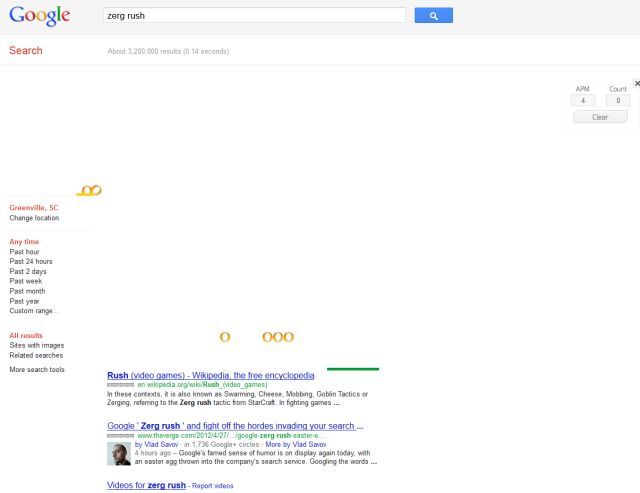 Google always seems to sneak in some cool Easter Eggs in their web site for people to discover. This week, yet another one of these hidden gems was found and it's an apparent tip of the hat to Blizzard's Starcraft game series.

All one has to do is type in "zerg rush" in Google's search box and the show starts. A bunch of yellow and red zeros with the Google logo font design start spreading themselves on the search results page and destroy those same results. You can click on the circles with your mouse cursor to destroy those circles yourself.

The Zerg are one of the alien races in the Starcraft series and the term "zerg rush" is one that is known in real time strategy game circles. It's used to describe a situation when any player tries to overwhelm his opponent with a mass of units during a multiplayer match.

Google stores your score for each "round" of play along with your "APM" (actions per minute) number, which is the number of times you click on the mouse to defeat those red and yellow foes. In the end, the circles then form two big "G" letters on the screen. You can also send your score to be displayed on your Google+ account.