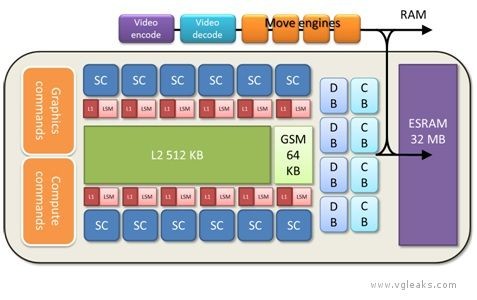 The information claims that the GPU will have a clock speed of 800 MHz. The article lists some of the other GPU hardware stats:

The article claims that, among other things, the GPU has 32 MB of embedded SRAM which it believes will not have some of the restrictions that the current Xbox 360 has with EDRAM. The article also says the GPU has a two stage caching system, along with two types of fetch operation. Each of the GPU's shader cores reportedly has its own L1 cache, Local Share Memory and scheduler, plus four SIMD units. In terms of antialiasing, the article claims the GPU supports 2x, 4x and 8x MSAA levels.

If you believe the rumors, the next Xbox GPU is based on a fairly high end Radeon chip from AMD. Microsoft is expected to officially announce the console sometime in the first half of 2013, with a launch in the fall of this year. As we reported last week, Sony is planing to hold a press event on February 20th, where it is expected to officially announce the successor to the Playstation 3.