Nokia’s announcement of the Lumia 900 yesterday signalled its intention to grab a chunk of the lucrative North American market, with the new handset launching exclusively on AT&T’s 4G LTE network. The Lumia 900 is expected to make its way to other markets later this year, and will be joined by new additions to Nokia’s handset line-up.

Nokia’s range of Lumia Windows Phones began with the two devices – the 710 and 800 – that were announced at Nokia World back in October. But as the selection of handsets continues to expand, and as Nokia expands the availability of these devices to new markets, the company aims to help its customers keep track of everything with a new online feature: the Nokia Lumia Momentum Map. 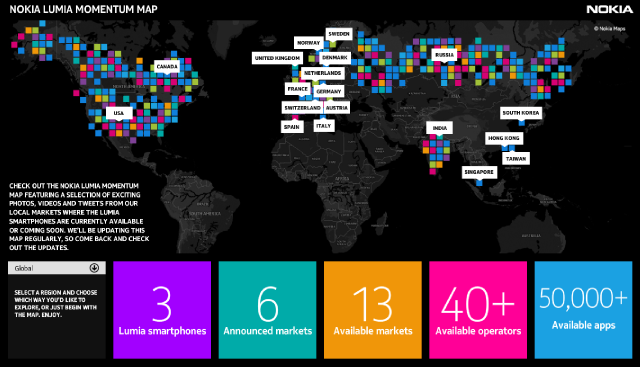 The global overview of the interactive map shows that Nokia’s three Lumia devices are or will be available on over 40 operators around the globe. Thirteen markets currently offer Lumia handsets, with six more being added shortly, including Canada, which sees the arrival of the Lumia 710 next month.

You can also track Nokia’s progress on a country-by-country basis. For example, if you dip into the United Kingdom, you’ll see that the Lumia 800 is available here, on the Orange, T-Mobile, 3, Vodafone and O2 networks, while a selection of tweets is also shared, along with pictures and video of the company’s marketing activities, such as the impressive ‘4D’ Nokia Lumia Live show featuring Deadmau5, which wowed thousands of Londoners back in November. 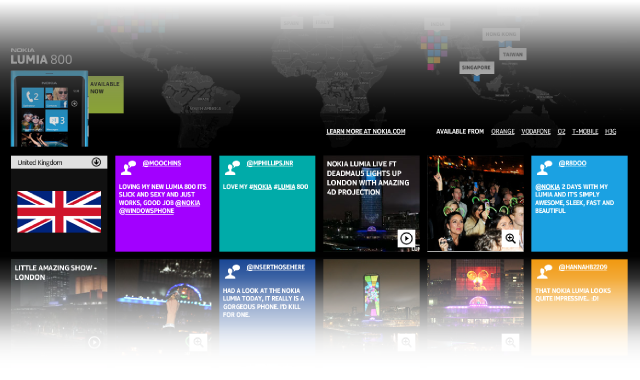 Of course, Nokia still has a long way to go before all of the countries on that map are illuminated with those distinctive colourful tiles – but it’s nice of them to make it that little bit easier for us to watch their march towards conquering (or at least reaching) the rest of the world with its Lumia Windows Phones.